Is General Motors Company (NYSE:GM) a good bet right now? We like to analyze hedge fund sentiment before conducting days of in-depth research. We do so because hedge funds and other elite investors have numerous Ivy League graduates, expert network advisers, and supply chain tipsters working or consulting for them. There is not a shortage of news stories covering failed hedge fund investments and it is a fact that hedge funds’ picks don’t beat the market 100% of the time, but their consensus picks have historically done very well and have outperformed the market after adjusting for risk.

Is General Motors Company (NYSE:GM) a buy right now? Investors who are in the know are getting less optimistic. The number of long hedge fund positions retreated by 1 recently. Our calculations also showed that GM isn’t among the 30 most popular stocks among hedge funds (click for Q4 rankings and see the video below for Q3 rankings).

We leave no stone unturned when looking for the next great investment idea. For example Europe is set to become the world’s largest cannabis market, so we check out this European marijuana stock pitch. We read hedge fund investor letters and listen to stock pitches at hedge fund conferences, and and go through short-term trade recommendations like this one. We even check out the recommendations of services with hard to believe track records. In January, we recommended a long position in one of the most shorted stocks in the market, and that stock returned more than 50% despite the large losses in the market since our recommendation. With all of this in mind we’re going to take a gander at the recent hedge fund action encompassing General Motors Company (NYSE:GM).

What have hedge funds been doing with General Motors Company (NYSE:GM)?

At Q4’s end, a total of 75 of the hedge funds tracked by Insider Monkey held long positions in this stock, a change of -1% from the previous quarter. Below, you can check out the change in hedge fund sentiment towards GM over the last 18 quarters. With hedge funds’ positions undergoing their usual ebb and flow, there exists an “upper tier” of noteworthy hedge fund managers who were boosting their stakes meaningfully (or already accumulated large positions). 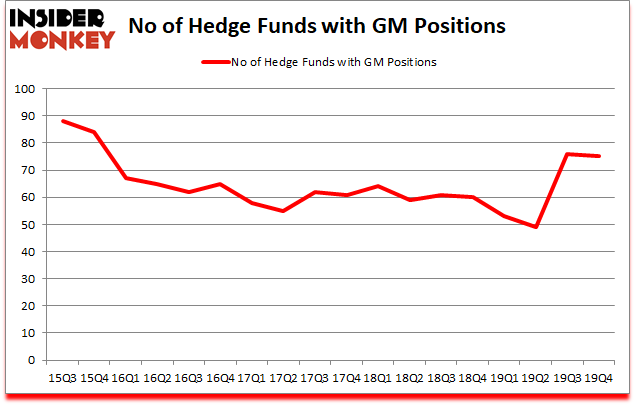 Of the funds tracked by Insider Monkey, Warren Buffett’s Berkshire Hathaway has the largest position in General Motors Company (NYSE:GM), worth close to $2.745 billion, corresponding to 1.1% of its total 13F portfolio. Sitting at the No. 2 spot is Edgar Wachenheim of Greenhaven Associates, with a $731.3 million position; 16.3% of its 13F portfolio is allocated to the company. Some other members of the smart money that are bullish encompass Boykin Curry’s Eagle Capital Management, Ken Griffin’s Citadel Investment Group and David Einhorn’s Greenlight Capital. In terms of the portfolio weights assigned to each position Greenlight Capital allocated the biggest weight to General Motors Company (NYSE:GM), around 16.71% of its 13F portfolio. Greenhaven Associates is also relatively very bullish on the stock, dishing out 16.31 percent of its 13F equity portfolio to GM.

Due to the fact that General Motors Company (NYSE:GM) has faced declining sentiment from the aggregate hedge fund industry, logic holds that there were a few fund managers that decided to sell off their positions entirely by the end of the third quarter. Interestingly, Anand Parekh’s Alyeska Investment Group dropped the biggest position of the 750 funds tracked by Insider Monkey, totaling an estimated $53.5 million in stock, and Josh Donfeld and David Rogers’s Castle Hook Partners was right behind this move, as the fund dumped about $35.2 million worth. These transactions are important to note, as total hedge fund interest was cut by 1 funds by the end of the third quarter.

As you can see these stocks had an average of 36.5 hedge funds with bullish positions and the average amount invested in these stocks was $741 million. That figure was $6532 million in GM’s case. Air Products & Chemicals, Inc. (NYSE:APD) is the most popular stock in this table. On the other hand America Movil SAB de CV (NYSE:AMX) is the least popular one with only 17 bullish hedge fund positions. Compared to these stocks General Motors Company (NYSE:GM) is more popular among hedge funds. Our calculations showed that top 20 most popular stocks among hedge funds returned 41.3% in 2019 and outperformed the S&P 500 ETF (SPY) by 10.1 percentage points. These stocks also gained 0.1% in 2020 through March 2nd and beat the market by 4.1 percentage points. Unfortunately GM wasn’t nearly as popular as these 20 stocks and hedge funds that were betting on GM were disappointed as the stock returned -14.2% during the first two months of 2020 (through March 2nd) and underperformed the market. If you are interested in investing in large cap stocks with huge upside potential, you should check out the top 20 most popular stocks among hedge funds as most of these stocks already outperformed the market in Q1.