Should You Avoid Equitrans Midstream Corporation (ETRN) Like Hedge Funds Did?

Is Equitrans Midstream Corporation (NYSE:ETRN) an excellent investment right now? The smart money is in a pessimistic mood. The number of long hedge fund positions went down by 3 recently. Our calculations also showed that ETRN isn’t among the 30 most popular stocks among hedge funds (see the video below). ETRN was in 16 hedge funds’ portfolios at the end of the second quarter of 2019. There were 19 hedge funds in our database with ETRN positions at the end of the previous quarter.

To most investors, hedge funds are assumed to be slow, old financial tools of yesteryear. While there are over 8000 funds trading at present, We choose to focus on the aristocrats of this group, around 750 funds. These investment experts watch over most of the hedge fund industry’s total asset base, and by paying attention to their unrivaled investments, Insider Monkey has found a number of investment strategies that have historically beaten Mr. Market. Insider Monkey’s flagship hedge fund strategy outstripped the S&P 500 index by around 5 percentage points annually since its inception in May 2014. We were able to generate large returns even by identifying short candidates. Our portfolio of short stocks lost 25.7% since February 2017 (through September 30th) even though the market was up more than 33% during the same period. We just shared a list of 10 short targets in our latest quarterly update .

At the end of the second quarter, a total of 16 of the hedge funds tracked by Insider Monkey were bullish on this stock, a change of -16% from the first quarter of 2019. On the other hand, there were a total of 0 hedge funds with a bullish position in ETRN a year ago. With hedgies’ positions undergoing their usual ebb and flow, there exists a select group of notable hedge fund managers who were adding to their stakes substantially (or already accumulated large positions). 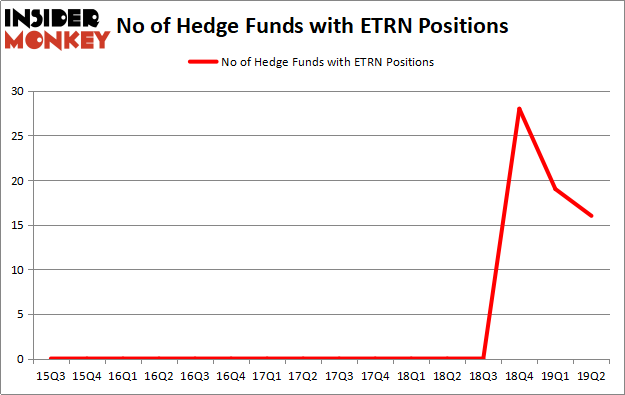 More specifically, Kensico Capital was the largest shareholder of Equitrans Midstream Corporation (NYSE:ETRN), with a stake worth $139.5 million reported as of the end of March. Trailing Kensico Capital was Scopia Capital, which amassed a stake valued at $133.7 million. Iridian Asset Management, Canyon Capital Advisors, and Deep Basin Capital were also very fond of the stock, giving the stock large weights in their portfolios.

Due to the fact that Equitrans Midstream Corporation (NYSE:ETRN) has witnessed falling interest from the entirety of the hedge funds we track, it’s easy to see that there were a few money managers that slashed their positions entirely heading into Q3. At the top of the heap, Stuart J. Zimmer’s Zimmer Partners dumped the largest stake of the “upper crust” of funds watched by Insider Monkey, comprising close to $16.6 million in stock, and Matthew Halbower’s Pentwater Capital Management was right behind this move, as the fund dumped about $9.6 million worth. These moves are important to note, as total hedge fund interest fell by 3 funds heading into Q3.

As you can see these stocks had an average of 25.5 hedge funds with bullish positions and the average amount invested in these stocks was $398 million. That figure was $551 million in ETRN’s case. MGIC Investment Corporation (NYSE:MTG) is the most popular stock in this table. On the other hand Seaboard Corporation (NYSEAMEX:SEB) is the least popular one with only 16 bullish hedge fund positions. Compared to these stocks Equitrans Midstream Corporation (NYSE:ETRN) is even less popular than SEB. Hedge funds dodged a bullet by taking a bearish stance towards ETRN. Our calculations showed that the top 20 most popular hedge fund stocks returned 24.4% in 2019 through September 30th and outperformed the S&P 500 ETF (SPY) by 4 percentage points. Unfortunately ETRN wasn’t nearly as popular as these 20 stocks (hedge fund sentiment was very bearish); ETRN investors were disappointed as the stock returned -23.8% during the third quarter and underperformed the market. If you are interested in investing in large cap stocks with huge upside potential, you should check out the top 20 most popular stocks among hedge funds as many of these stocks already outperformed the market so far in 2019.