Should You Avoid China Unicom (Hong Kong) Limited (CHU) Like Hedge Funds Did?

Before we spend countless hours researching a company, we like to analyze what insiders, hedge funds and billionaire investors think of the stock first. This is a necessary first step in our investment process because our research has shown that the elite investors’ consensus returns have been exceptional. In the following paragraphs, we find out what the billionaire investors and hedge funds think of China Unicom (Hong Kong) Limited (NYSE:CHU).

China Unicom (Hong Kong) Limited (NYSE:CHU) was in 6 hedge funds’ portfolios at the end of June. CHU has experienced a decrease in support from the world’s most elite money managers recently. There were 8 hedge funds in our database with CHU holdings at the end of the previous quarter. Our calculations also showed that CHU isn’t among the 30 most popular stocks among hedge funds (see the video below). 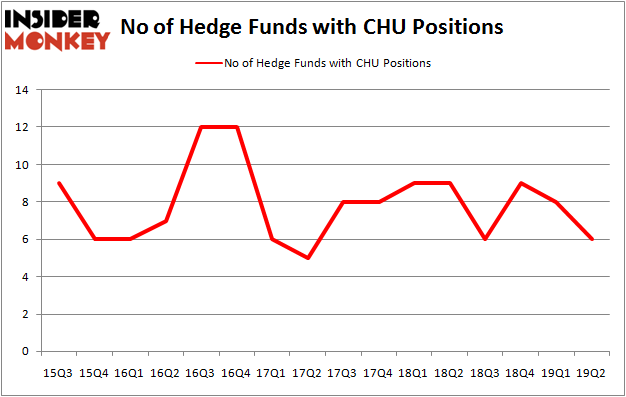 Unlike some fund managers who are betting on Dow reaching 40000 in a year, our long-short investment strategy doesn’t rely on bull markets to deliver double digit returns. We only rely on hedge fund buy/sell signals. Let’s take a glance at the recent hedge fund action encompassing China Unicom (Hong Kong) Limited (NYSE:CHU).

At Q2’s end, a total of 6 of the hedge funds tracked by Insider Monkey were bullish on this stock, a change of -25% from one quarter earlier. By comparison, 9 hedge funds held shares or bullish call options in CHU a year ago. With the smart money’s positions undergoing their usual ebb and flow, there exists an “upper tier” of noteworthy hedge fund managers who were upping their holdings substantially (or already accumulated large positions).

More specifically, Renaissance Technologies was the largest shareholder of China Unicom (Hong Kong) Limited (NYSE:CHU), with a stake worth $40.8 million reported as of the end of March. Trailing Renaissance Technologies was Arrowstreet Capital, which amassed a stake valued at $21.8 million. Two Sigma Advisors, Millennium Management, and Sensato Capital Management were also very fond of the stock, giving the stock large weights in their portfolios.

Because China Unicom (Hong Kong) Limited (NYSE:CHU) has witnessed a decline in interest from the aggregate hedge fund industry, we can see that there exists a select few fund managers that decided to sell off their positions entirely last quarter. Interestingly, Paul Marshall and Ian Wace’s Marshall Wace LLP sold off the largest position of the “upper crust” of funds watched by Insider Monkey, worth an estimated $0.2 million in stock. Michael Platt and William Reeves’s fund, BlueCrest Capital Mgmt., also dropped its stock, about $0.1 million worth. These bearish behaviors are intriguing to say the least, as aggregate hedge fund interest fell by 2 funds last quarter.

As you can see these stocks had an average of 36 hedge funds with bullish positions and the average amount invested in these stocks was $2065 million. That figure was $64 million in CHU’s case. Red Hat, Inc. (NYSE:RHT) is the most popular stock in this table. On the other hand Barclays PLC (NYSE:BCS) is the least popular one with only 12 bullish hedge fund positions. Compared to these stocks China Unicom (Hong Kong) Limited (NYSE:CHU) is even less popular than BCS. Hedge funds dodged a bullet by taking a bearish stance towards CHU. Our calculations showed that the top 20 most popular hedge fund stocks returned 24.4% in 2019 through September 30th and outperformed the S&P 500 ETF (SPY) by 4 percentage points. Unfortunately CHU wasn’t nearly as popular as these 20 stocks (hedge fund sentiment was very bearish); CHU investors were disappointed as the stock returned -3.8% during the third quarter and underperformed the market. If you are interested in investing in large cap stocks with huge upside potential, you should check out the top 20 most popular stocks among hedge funds as many of these stocks already outperformed the market so far in 2019.

Is Cognizant Technology Solutions Corporation (CTSH) Going to Burn These Hedge...
Monthly Newsletter Strategy
Download a free copy of our newsletter and see the details inside!
Hedge Fund Resource Center
Related News
Should You Buy China Unicom (Hong Kong) Limited (NYSE:CHU)? Hedge Funds Are Selling China Unicom (Hong Kong) Limited (CHU) Should You Buy China Unicom (Hong Kong) Limited (ADR) (CHU)? 11 Most Expensive Countries in Asia 25 Countries That Spend The Most On Food: US Isn’t One Of ‘Em 20 Most Expensive Cities to Live in The World in 2015 11 Most Expensive Countries to Buy Milk 10 Biggest Companies That Offer Pensions 15 Wealthiest Families in the World vs. First Generation Ultra Billionaires 5 Makeup Companies that Don’t Test on Animals
Billionaire Hedge Funds