Should You Avoid Chimerix Inc (CMRX)?

As we already know from media reports and hedge fund investor letters, many hedge funds lost money in October, blaming macroeconomic conditions and unpredictable events that hit several sectors, with healthcare among them. Nevertheless, most investors decided to stick to their bullish theses and their long-term focus allows us to profit from the recent declines. In particular, let’s take a look at what hedge funds think about Chimerix Inc (NASDAQ:CMRX) in this article.

Is Chimerix Inc (NASDAQ:CMRX) undervalued? The best stock pickers are in a pessimistic mood. The number of long hedge fund bets went down by 1 lately. Our calculations also showed that cmrx isn’t among the 30 most popular stocks among hedge funds. CMRX was in 12 hedge funds’ portfolios at the end of the third quarter of 2018. There were 13 hedge funds in our database with CMRX positions at the end of the previous quarter.

In the eyes of most shareholders, hedge funds are seen as unimportant, old investment vehicles of yesteryear. While there are greater than 8,000 funds trading at the moment, We look at the bigwigs of this club, about 700 funds. It is estimated that this group of investors direct most of all hedge funds’ total capital, and by tracking their best investments, Insider Monkey has come up with a few investment strategies that have historically outstripped the S&P 500 index. Insider Monkey’s flagship hedge fund strategy defeated the S&P 500 index by 6 percentage points per annum since its inception in May 2014 through early November 2018. We were able to generate large returns even by identifying short candidates. Our portfolio of short stocks lost 24% since February 2017 (through December 3rd) even though the market was up nearly 23% during the same period. We just shared a list of 11 short targets in our latest quarterly update.

How have hedgies been trading Chimerix Inc (NASDAQ:CMRX)?

Heading into the fourth quarter of 2018, a total of 12 of the hedge funds tracked by Insider Monkey held long positions in this stock, a change of -8% from the previous quarter. Below, you can check out the change in hedge fund sentiment towards CMRX over the last 13 quarters. So, let’s find out which hedge funds were among the top holders of the stock and which hedge funds were making big moves. 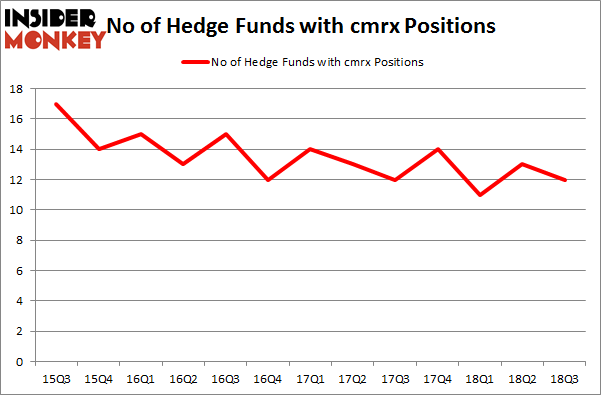 When looking at the institutional investors followed by Insider Monkey, Jeremy Green’s Redmile Group has the largest position in Chimerix Inc (NASDAQ:CMRX), worth close to $14 million, amounting to 0.4% of its total 13F portfolio. The second most bullish fund manager is Steven Boyd of Armistice Capital, with a $5.1 million position; the fund has 0.3% of its 13F portfolio invested in the stock. Other hedge funds and institutional investors with similar optimism encompass James A. Silverman’s Opaleye Management, Steve Cohen’s Point72 Asset Management and Noam Gottesman’s GLG Partners.

Judging by the fact that Chimerix Inc (NASDAQ:CMRX) has experienced falling interest from the aggregate hedge fund industry, it’s easy to see that there were a few funds that slashed their full holdings in the third quarter. At the top of the heap, Dmitry Balyasny’s Balyasny Asset Management dropped the largest investment of all the hedgies monitored by Insider Monkey, worth an estimated $0.1 million in stock, and Ben Levine, Andrew Manuel and Stefan Renold’s LMR Partners was right behind this move, as the fund sold off about $0 million worth. These moves are important to note, as total hedge fund interest fell by 1 funds in the third quarter.

As you can see these stocks had an average of 5.75 hedge funds with bullish positions and the average amount invested in these stocks was $7 million. That figure was $38 million in CMRX’s case. Geospace Technologies Corp (NASDAQ:GEOS) is the most popular stock in this table. On the other hand China Rapid Finance Limited (NYSE:XRF) is the least popular one with only 1 bullish hedge fund positions. Chimerix Inc (NASDAQ:CMRX) is not the most popular stock in this group but hedge fund interest is still above average. This is a slightly positive signal but we’d rather spend our time researching stocks that hedge funds are piling on. In this regard GEOS might be a better candidate to consider a long position.