Before we spend days researching a stock idea we like to take a look at how hedge funds and billionaire investors recently traded that stock. Russell 2000 ETF (IWM) lagged the larger S&P 500 ETF (SPY) by more than 10 percentage points since the end of the third quarter of 2018. This means hedge funds that are allocating a higher percentage of their portfolio to small-cap stocks were probably underperforming the market. However, this also means that as small-cap stocks start to mean revert, these hedge funds will start delivering better returns than the S&P 500 Index funds. In this article, we will take a look at what hedge funds think about Bridgewater Bancshares, Inc. (NASDAQ:BWB).

Is Bridgewater Bancshares, Inc. (NASDAQ:BWB) the right investment to pursue these days? Hedge funds are becoming less hopeful. The number of bullish hedge fund bets retreated by 1 recently. Our calculations also showed that BWB isn’t among the 30 most popular stocks among hedge funds (see the video below). BWB was in 6 hedge funds’ portfolios at the end of June. There were 7 hedge funds in our database with BWB holdings at the end of the previous quarter.

According to most shareholders, hedge funds are assumed to be slow, outdated investment tools of years past. While there are over 8000 funds trading today, We hone in on the crème de la crème of this club, approximately 750 funds. Most estimates calculate that this group of people direct the majority of the hedge fund industry’s total asset base, and by following their best stock picks, Insider Monkey has uncovered a few investment strategies that have historically defeated the market. Insider Monkey’s flagship hedge fund strategy defeated the S&P 500 index by around 5 percentage points annually since its inception in May 2014. We were able to generate large returns even by identifying short candidates. Our portfolio of short stocks lost 25.7% since February 2017 (through September 30th) even though the market was up more than 33% during the same period. We just shared a list of 10 short targets in our latest quarterly update .

Unlike other investors who track every movement of the 25 largest hedge funds, our long-short investment strategy relies on hedge fund buy/sell signals given by the 100 best performing hedge funds. Let’s take a glance at the new hedge fund action encompassing Bridgewater Bancshares, Inc. (NASDAQ:BWB).

How have hedgies been trading Bridgewater Bancshares, Inc. (NASDAQ:BWB)?

At the end of the second quarter, a total of 6 of the hedge funds tracked by Insider Monkey were long this stock, a change of -14% from the first quarter of 2019. Below, you can check out the change in hedge fund sentiment towards BWB over the last 16 quarters. So, let’s find out which hedge funds were among the top holders of the stock and which hedge funds were making big moves. 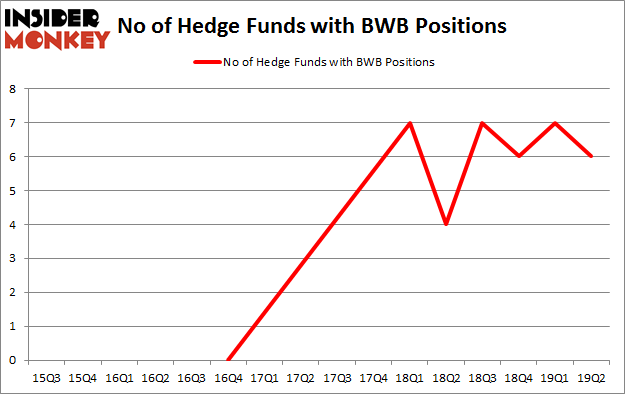 The largest stake in Bridgewater Bancshares, Inc. (NASDAQ:BWB) was held by EJF Capital, which reported holding $26.2 million worth of stock at the end of March. It was followed by Renaissance Technologies with a $1.9 million position. Other investors bullish on the company included Two Sigma Advisors, AlphaOne Capital Partners, and Arrowstreet Capital.

Judging by the fact that Bridgewater Bancshares, Inc. (NASDAQ:BWB) has witnessed bearish sentiment from the aggregate hedge fund industry, it’s easy to see that there were a few funds that decided to sell off their entire stakes heading into Q3. Interestingly, Matthew Lindenbaum’s Basswood Capital dropped the largest stake of the 750 funds followed by Insider Monkey, totaling about $2.6 million in stock. Israel Englander’s fund, Millennium Management, also sold off its stock, about $0.5 million worth. These transactions are intriguing to say the least, as total hedge fund interest was cut by 1 funds heading into Q3.

As you can see these stocks had an average of 8.25 hedge funds with bullish positions and the average amount invested in these stocks was $61 million. That figure was $29 million in BWB’s case. AMAG Pharmaceuticals, Inc. (NASDAQ:AMAG) is the most popular stock in this table. On the other hand Limoneira Company (NASDAQ:LMNR) is the least popular one with only 2 bullish hedge fund positions. Bridgewater Bancshares, Inc. (NASDAQ:BWB) is not the least popular stock in this group but hedge fund interest is still below average. Our calculations showed that top 20 most popular stocks among hedge funds returned 24.4% in 2019 through September 30th and outperformed the S&P 500 ETF (SPY) by 4 percentage points. A small number of hedge funds were also right about betting on BWB, though not to the same extent, as the stock returned 3.5% during the third quarter and outperformed the market.

Did Hedge Funds Drop The Ball On Cutera, Inc. (CUTR) ?
Monthly Newsletter Strategy
Download a free copy of our newsletter and see the details inside!
Hedge Fund Resource Center
Related News
11 Largest Auto Insurance Companies In The US In 2019 10 Poorest Cities in America in 2019 8 Lowest Tar and Nicotine Cigarette Brands in 2019
Billionaire Hedge Funds