Is American Campus Communities, Inc. (NYSE:ACC) undervalued? Hedge funds are getting less bullish. The number of bullish hedge fund bets shrunk by 1 in recent months. Our calculations also showed that ACC isn’t among the 30 most popular stocks among hedge funds. ACC was in 16 hedge funds’ portfolios at the end of December. There were 17 hedge funds in our database with ACC positions at the end of the previous quarter.

What does the smart money think about American Campus Communities, Inc. (NYSE:ACC)?

Heading into the first quarter of 2019, a total of 16 of the hedge funds tracked by Insider Monkey were bullish on this stock, a change of -6% from one quarter earlier. Below, you can check out the change in hedge fund sentiment towards ACC over the last 14 quarters. With hedgies’ capital changing hands, there exists a select group of noteworthy hedge fund managers who were adding to their holdings meaningfully (or already accumulated large positions). 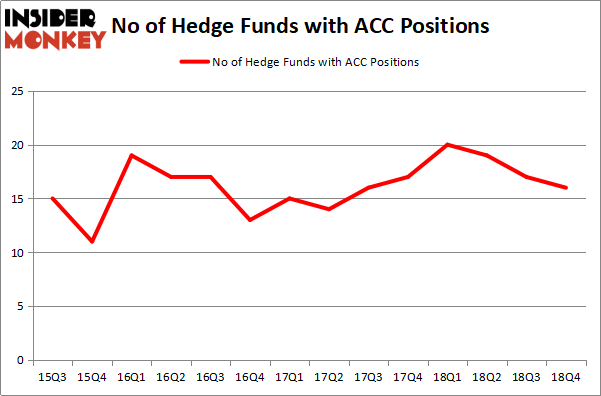 The largest stake in American Campus Communities, Inc. (NYSE:ACC) was held by AEW Capital Management, which reported holding $90.5 million worth of stock at the end of September. It was followed by Diamond Hill Capital with a $84.7 million position. Other investors bullish on the company included Citadel Investment Group, Winton Capital Management, and Renaissance Technologies.

Seeing as American Campus Communities, Inc. (NYSE:ACC) has faced declining sentiment from hedge fund managers, logic holds that there exists a select few fund managers who were dropping their full holdings by the end of the third quarter. Intriguingly, Dmitry Balyasny’s Balyasny Asset Management dropped the largest investment of the 700 funds watched by Insider Monkey, totaling about $3.1 million in stock, and Matthew Tewksbury’s Stevens Capital Management was right behind this move, as the fund cut about $1.2 million worth. These transactions are interesting, as total hedge fund interest fell by 1 funds by the end of the third quarter.

As you can see these stocks had an average of 23.25 hedge funds with bullish positions and the average amount invested in these stocks was $315 million. That figure was $332 million in ACC’s case. Crown Holdings, Inc. (NYSE:CCK) is the most popular stock in this table. On the other hand Royal Gold, Inc (NASDAQ:RGLD) is the least popular one with only 15 bullish hedge fund positions. American Campus Communities, Inc. (NYSE:ACC) is not the least popular stock in this group but hedge fund interest is still below average. Our calculations showed that the top 15 most popular stocks among hedge funds returned 21.3% year-to-date through April 8th and outperformed the S&P 500 ETF (SPY) by more than 5 percentage points. A few hedge funds were also right about betting on ACC, though not to the same extent, as the stock returned 16.8% and outperformed the market by a small margin.