The Insider Monkey team has completed processing the quarterly 13F filings for the June quarter submitted by the hedge funds and other money managers included in our extensive database. Most hedge fund investors experienced strong gains on the back of a strong market performance, which certainly propelled them to adjust their equity holdings so as to maintain the desired risk profile. As a result, the relevancy of these public filings and their content is indisputable, as they may reveal numerous high-potential stocks. The following article will discuss the smart money sentiment towards Shell Midstream Partners LP (NYSE:SHLX).

Is Shell Midstream Partners LP (NYSE:SHLX) worth your attention right now? Prominent investors are in a pessimistic mood. The number of long hedge fund bets went down by 2 lately. Our calculations also showed that SHLX isn’t among the 30 most popular stocks among hedge funds (see the video below).

At Q2’s end, a total of 5 of the hedge funds tracked by Insider Monkey were bullish on this stock, a change of -29% from the first quarter of 2019. On the other hand, there were a total of 7 hedge funds with a bullish position in SHLX a year ago. With hedge funds’ capital changing hands, there exists an “upper tier” of key hedge fund managers who were increasing their holdings considerably (or already accumulated large positions). 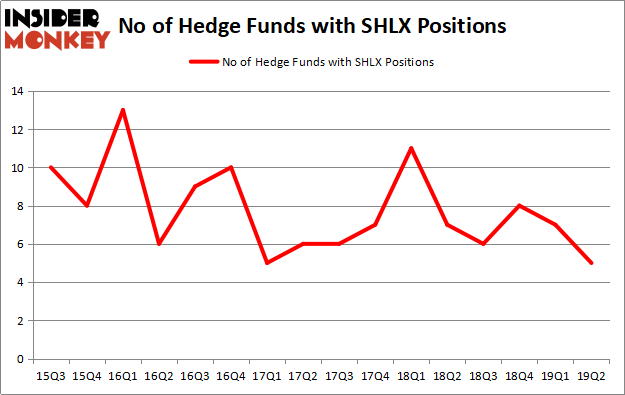 The largest stake in Shell Midstream Partners LP (NYSE:SHLX) was held by BP Capital, which reported holding $5.1 million worth of stock at the end of March. It was followed by Citadel Investment Group with a $4.9 million position. Other investors bullish on the company included Citadel Investment Group, Lucas Capital Management, and Wexford Capital.

Judging by the fact that Shell Midstream Partners LP (NYSE:SHLX) has experienced bearish sentiment from hedge fund managers, logic holds that there was a specific group of funds that elected to cut their entire stakes in the second quarter. Intriguingly, Stuart J. Zimmer’s Zimmer Partners cut the biggest stake of all the hedgies followed by Insider Monkey, totaling an estimated $4.5 million in stock. Peter Rathjens, Bruce Clarke and John Campbell’s fund, Arrowstreet Capital, also dumped its stock, about $0.8 million worth. These transactions are interesting, as aggregate hedge fund interest dropped by 2 funds in the second quarter.

As you can see these stocks had an average of 23.25 hedge funds with bullish positions and the average amount invested in these stocks was $381 million. That figure was $12 million in SHLX’s case. Armstrong World Industries, Inc. (NYSE:AWI) is the most popular stock in this table. On the other hand Southwest Gas Corporation (NYSE:SWX) is the least popular one with only 16 bullish hedge fund positions. Compared to these stocks Shell Midstream Partners LP (NYSE:SHLX) is even less popular than SWX. Hedge funds dodged a bullet by taking a bearish stance towards SHLX. Our calculations showed that the top 20 most popular hedge fund stocks returned 24.4% in 2019 through September 30th and outperformed the S&P 500 ETF (SPY) by 4 percentage points. Unfortunately SHLX wasn’t nearly as popular as these 20 stocks (hedge fund sentiment was very bearish); SHLX investors were disappointed as the stock returned 0.7% during the third quarter and underperformed the market. If you are interested in investing in large cap stocks with huge upside potential, you should check out the top 20 most popular stocks among hedge funds as many of these stocks already outperformed the market so far in 2019.