Safeway Inc. (SWY), The Kroger Co. (KR): This Grocer Is Heading in the Right Direction

Safeway Inc. (NYSE:SWY) is the second largest supermarket operator in the U.S. after The Kroger Co. (NYSE:KR), and primarily operates as a food and drug retailer. It has many brands of its own such as Safeway, O Organics, Eating Right, Open Nature, Bright Green, etc. The stock has appreciated a commendable ~48% (as compared to a ~17% uptick in the S&P 500) year-to-date. 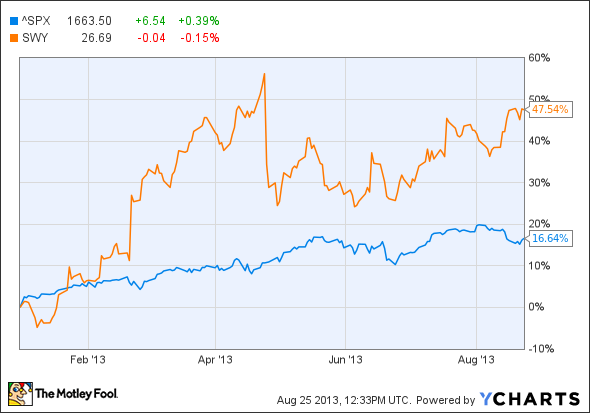 It is estimated that the food retail market will grow at CAGR of 5.5% globally for the period of 2011-2016, as compared to 5.7% for 2007-2011. Grocery stores are facing stiff competition and price wars are common as they all look to attract more customers. Companies are doing this by focusing on strategies like expansion, restructuring and store remodeling, all in order to control the $7 trillion grocery market. In the second quarter, Safeway Inc. (NYSE:SWY) managed to do $8.7 billion in revenue and fell short of consensus estimates of $10.3 billion in the second quarter. The uptick in identical-stores sales saved the company from posting a still-lower figure.

Safeway Inc. (NYSE:SWY) is making efforts to increase sales by introducing various loyalty programs and fuel programs. Additionally, it is also remodeling its existing stores and pushing private labels in a bid to increase profitability. Different private label brands add an additional 1,200 basis points to its gross margin, as private label products are much more profitable than the same item from another brand.

Just for U has been a success with customers. Safeway Inc. (NYSE:SWY) has successfully implemented this program based on data collected with respect to customers’ taste, preferences, likes, and dislikes. It is estimated that about 5.4 million customers have benefited from this loyalty program. These customers have started visiting the stores more often according to the company and in fact, about 50% of the top line is being attributed to these shoppers.

Safeway Inc. (NYSE:SWY) made an investment of $928 million last year for nine new or replacement stores, four lifestyle remodels, and eight other projects. It expects to spend anywhere between $1 and $1.1 billion this year. It is clustering its stores into what it calls premium, mainstream and value categories. The premium segment is addressing the needs of higher income customers, whereas the value segment is dealing with affordable products for the lower income group.

As a part of the restructuring, Safeway Inc. (NYSE:SWY) disposed off it’s Canadian operations this June for $5.7 billion. To cash in on the Washington, D.C. area boom, Safeway is expanding it’s D.C. presence . Safeway, along with its real estate wing, Property Development Centers, got a solid response after testing local developer interest in building housing above the new locations. As a result, they are also expanding on this model, and a new Safeway in Wheaton, with 486 apartments on top, will be complete in October. The new Petworth store, with 220 apartments, is expected to open next summer.

Other grocery stores in same league as Safeway Inc. (NYSE:SWY) are The Kroger Co. (NYSE:KR) and SUPERVALU INC. (NYSE:SVU).

The Kroger Co. (NYSE:KR) has increased its market share in 9 out of 17 markets, despite facing tough competition from Wal-Mart Stores, Inc. (NYSE:WMT). It believes customers who are digitally engaged with the company are more loyal, so it has been spending to try and connect with them digitally and this effort seems to be paying off well. It is also supporting fishery and seafood initiatives in order to gain consumer confidence and improve its fresh image.