Could the timing be any worse? Just as Rio Tinto plc (ADR) (NYSE:RIO) and BHP Billiton Limited (ADR) (NYSE:BHP) are shedding assets to focus more intently on their iron ore business, analysts at Morgan Stanley (NYSE:MS) say the whole industry is about to get dusted from a supply glut. It anticipates that inventories will widen next year and expand through 2018, causing prices to tumble by more than a third just this year alone.

Hitting the brakes on the Orient Express
Of course, the miners aren’t helping themselves, as each is bringing new mines online in Australia, along with top iron ore miner Vale SA (ADR) (NYSE:VALE) opening one up in Brazil. Even though China’s steel mills still have a voracious appetite when it comes to the ore, analysts expect that industry output will grow by only 2.6% this year, so it won’t be enough to offset rising surpluses. Even China’s own development and economic planning agency says the country will experience a surplus of 20 million tons, as it will import only about 4% more than it did last year.

China’s economic growth has been slowing, and even though economists predict that GDP will expand beyond 8% this year, that’s still a good deal below the better than 10% annual growth it’s enjoyed for the past decade.

Anticipating the weak market, Cliffs Natural Resources Inc (NYSE:CLF) announced last month that it will idle its Wabush Pointe Noire pellet plant in Sept-Iles, Quebec, by the end of the second quarter of 2013. One analyst frets that it will also need to sell its Australian iron ore assets to help pay down some of the $3 billion worth of debt it carries on its balance sheet.

The end is nigh
Morgan Stanley (NYSE:MS) says 2013 will actually experience a supply deficit of around 81 million tonnes of iron ore, but next year it will grow to a 3.3 million tonne surplus and continue widening until it is 291 million tonnes in 2018.

Factors that might mitigate when, or even if, the glut materializes include the length of time it takes to bring new mines online, but perhaps more crucial will be India’s turning from a net exporter of iron ore into a net importer. The Wall Street Journal reports that mining interests in the subcontinent worry that they won’t be able to export anything because the country’s Supreme Court keeps rolling out export bans during a probe into illegal mining.

Despite all the doom and gloom, iron ore prices at $139 a ton have held up remarkably well, but Bloomberg believes that based on consensus analyst estimates, it could hit $90 a ton by year’s end. 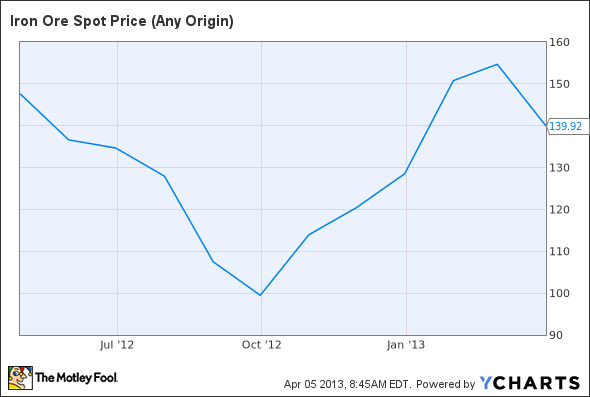 Down a mine shaft
Shares of miners have not fared as well, with BHP Billiton Limited (ADR) (NYSE:BHP) down 15% from its 52-week high, Rio Tinto plc (ADR) (NYSE:RIO) off 22%, and Vale SA (ADR) (NYSE:VALE) losing a quarter of its value. Cliffs Natural Resources Inc (NYSE:CLF) has performed the worst of the bunch, with its stock down more than 72%.

If the industry holds even close to what analysts expect, the bloodletting might not be over and the miners could end up worse than canaries sent into the coal mines.

The article Iron Ore About to Get Mauled by Bear Market originally appeared on Fool.com.