India is the third largest exporter of iron ore in the world, and any disruption in its supply affects international iron ore prices. But due to the political mess in the country, the Supreme Court of India imposed a ban on the operations of over 200 mines in Goa last year. This was followed by bans in Indian states of Karnataka and Orissa, which altogether account for more than 90% of India’s total iron ore production.

Since the imposed bans, iron ore prices have surged 55%, and to control the domestic prices of the commodity, the Government of India is now looking to ban all iron ore exports from the country. This should create a serious shortage of iron ore in the coming years, but not all mining companies are worth the risk.

Operations in Goa and Orissa also remain suspended, and as a result, its consolidated quarterly net profits plunged 26%. But its stake in Cairn India acted as a cushion to some extent. Sterlite Industries India Limited (ADR) (NYSE:SLT) owns a 20% stake in India-based oil company, Cairn India. The 20% stake in the oil major contributed around $120 million to Sterlite’s overall net profit, without which Sterlite Industries India Limited (ADR) (NYSE:SLT) would’ve reported a loss of around $34 million.

Naturally, investing in global mining companies, like Rio Tinto plc (ADR) (NYSE:RIO) and BHP Billiton Limited (ADR) (NYSE:BHP) sounds like a better idea. But BHP Billiton does not belong to the group of financially healthy companies. In 2010, it had net cash of $200 million, but by Dec. 31, 2012, it had net debt of over $30 billion.

Rio Tinto has also been struggling with record debt levels, and currently has around $19.4 billion in long -term debt. To repay the towering debt, BHP Billiton Limited (ADR) (NYSE:BHP) and Rio Tinto would be selling their assets which could jointly fetch as much as $30 billion.

Rio Tinto plc (ADR) (NYSE:RIO)’s management made it clear that it would be selling its diamond producing assets worth $2 billion, which won’t have much impact on its overall earnings. Analysts at Commonwealth Bank estimate that Rio Tinto can offload around $13.5 billion worth of assets, which include copper assets at Escondida and Kennecott.

Given the towering copper inventory, I don’t think Rio Tinto plc (ADR) (NYSE:RIO) would be able to get a fair price of its copper assets. And to add to it, selling $2 billion worth of assets would be of little significance for a company with a market cap of nearly $86 billion and a debt/equity ratio of 57. 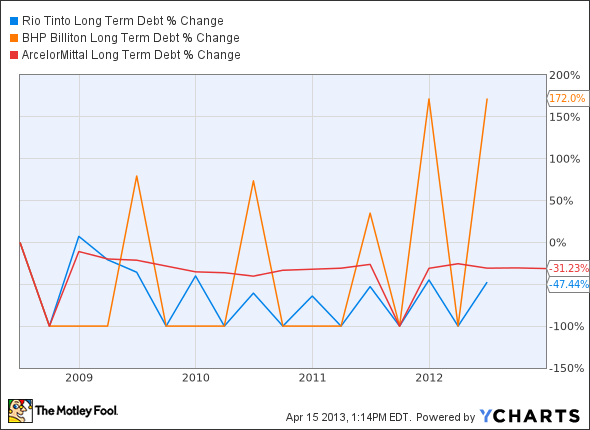