Rigel Pharmaceuticals, Inc. (NASDAQ:RIGL) shares haven’t seen a lot of action during the third quarter. Overall, hedge fund sentiment was unchanged. The stock was in 17 hedge funds’ portfolios at the end of September. At the end of this article we will also compare RIGL to other stocks including EMC Insurance Group Inc. (NASDAQ:EMCI), Gores Holdings II, Inc. (NYSE:GSHT), and Independence Holding Company (NYSE:IHC) to get a better sense of its popularity.

At the end of the third quarter, a total of 17 of the hedge funds tracked by Insider Monkey were long this stock, representing no change from the previous quarter. Below, you can check out the change in hedge fund sentiment towards RIGL over the last 13 quarters. So, let’s find out which hedge funds were among the top holders of the stock and which hedge funds were making big moves. 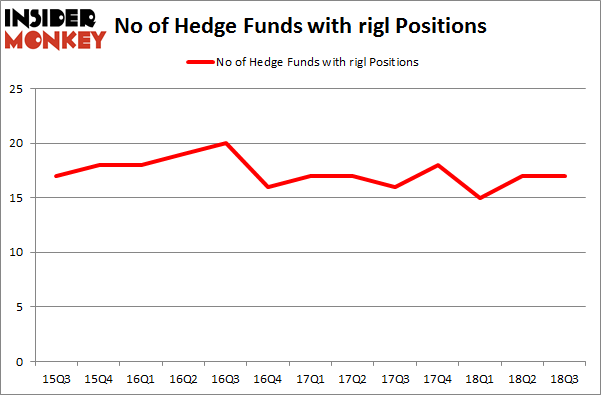 The largest stake in Rigel Pharmaceuticals, Inc. (NASDAQ:RIGL) was held by Millennium Management, which reported holding $24.5 million worth of stock at the end of September. It was followed by Citadel Investment Group with a $17.8 million position. Other investors bullish on the company included Tamarack Capital Management, Rock Springs Capital Management, and Palo Alto Investors.

Due to the fact that Rigel Pharmaceuticals, Inc. (NASDAQ:RIGL) has experienced falling interest from the aggregate hedge fund industry, it’s easy to see that there were a few funds that elected to cut their full holdings by the end of the third quarter. At the top of the heap, Jeffrey Jay and David Kroin’s Great Point Partners sold off the largest investment of all the hedgies tracked by Insider Monkey, worth an estimated $9.6 million in stock. Julian Baker and Felix Baker’s fund, Baker Bros. Advisors, also sold off its stock, about $2.9 million worth. These transactions are important to note, as aggregate hedge fund interest stayed the same (this is a bearish signal in our experience).

As you can see these stocks had an average of 9.75 hedge funds with bullish positions and the average amount invested in these stocks was $80 million. That figure was $99 million in RIGL’s case. Gores Holdings II, Inc. (NYSE:GSHT) is the most popular stock in this table. On the other hand EMC Insurance Group Inc. (NASDAQ:EMCI) is the least popular one with only 2 bullish hedge fund positions. Rigel Pharmaceuticals, Inc. (NASDAQ:RIGL) is not the most popular stock in this group but hedge fund interest is still above average. This is a slightly positive signal but we’d rather spend our time researching stocks that hedge funds are piling on. In this regard GSHT might be a better candidate to consider a long position.