Investing in small cap stocks has historically been a way to outperform the market, as small cap companies typically grow faster on average than the blue chips. That outperformance comes with a price, however, as there are occasional periods of higher volatility. The one and a half month time period since the end of the third quarter is one of those periods, as the Russell 2000 ETF (IWM) has underperformed the larger S&P 500 ETF (SPY) by about 4 percentage points. Given that the funds we track tend to have a disproportionate amount of their portfolios in smaller cap stocks, they have seen some volatility in their portfolios too. Actually their moves are potentially one of the factors that contributed to this volatility. In this article, we use our extensive database of hedge fund holdings to find out what the smart money thinks of Regency Centers Corp (NASDAQ:REG).

Is Regency Centers Corp (NASDAQ:REG) the right investment to pursue these days? The smart money is selling. The number of long hedge fund bets decreased by 4 recently. Our calculations also showed that REG isn’t among the 30 most popular stocks among hedge funds. REG was in 18 hedge funds’ portfolios at the end of September. There were 22 hedge funds in our database with REG holdings at the end of the previous quarter.

To the average investor there are a large number of gauges stock market investors have at their disposal to grade publicly traded companies. A couple of the most under-the-radar gauges are hedge fund and insider trading activity. Our experts have shown that, historically, those who follow the top picks of the best money managers can beat their index-focused peers by a solid margin (see the details here).

At Q3’s end, a total of 18 of the hedge funds tracked by Insider Monkey held long positions in this stock, a change of -18% from one quarter earlier. The graph below displays the number of hedge funds with bullish position in REG over the last 13 quarters. With the smart money’s sentiment swirling, there exists a few noteworthy hedge fund managers who were boosting their holdings considerably (or already accumulated large positions). 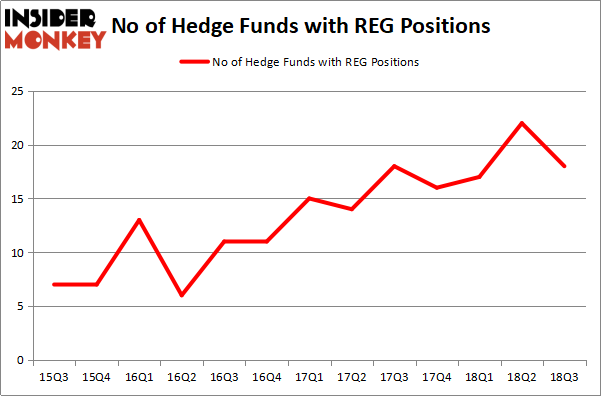 Of the funds tracked by Insider Monkey, Dmitry Balyasny’s Balyasny Asset Management has the biggest position in Regency Centers Corp (NASDAQ:REG), worth close to $66.2 million, accounting for 0.3% of its total 13F portfolio. Sitting at the No. 2 spot is Israel Englander of Millennium Management, with a $57 million position; the fund has 0.1% of its 13F portfolio invested in the stock. Remaining professional money managers that hold long positions consist of Jim Simons’s Renaissance Technologies, D. E. Shaw’s D E Shaw and Phill Gross and Robert Atchinson’s Adage Capital Management.

Seeing as Regency Centers Corp (NASDAQ:REG) has experienced falling interest from hedge fund managers, logic holds that there was a specific group of hedgies that decided to sell off their positions entirely heading into Q3. At the top of the heap, Greg Poole’s Echo Street Capital Management cut the biggest stake of the 700 funds monitored by Insider Monkey, valued at close to $24.5 million in stock, and Paul Marshall and Ian Wace’s Marshall Wace LLP was right behind this move, as the fund dropped about $7.3 million worth. These transactions are important to note, as aggregate hedge fund interest was cut by 4 funds heading into Q3.

As you can see these stocks had an average of 22 hedge funds with bullish positions and the average amount invested in these stocks was $635 million. That figure was $253 million in REG’s case. Jacobs Engineering Group Inc (NYSE:JEC) is the most popular stock in this table. On the other hand Trimble Inc. (NASDAQ:TRMB) is the least popular one with only 17 bullish hedge fund positions. Regency Centers Corp (NASDAQ:REG) is not the least popular stock in this group but hedge fund interest is still below average. This is a slightly negative signal and we’d rather spend our time researching stocks that hedge funds are piling on. In this regard JEC might be a better candidate to consider a long position.