Hedge funds and large money managers usually invest with a focus on the long-term horizon and, therefore, short-lived dips or bumps on the charts, usually don’t make them change their opinion towards a company. This time it may be different. During the fourth quarter of 2018 we observed increased volatility and small-cap stocks underperformed the market. Things completely reversed during the first half of 2019. Hedge fund investor letters indicated that they are cutting their overall exposure, closing out some position and doubling down on others. Let’s take a look at the hedge fund sentiment towards Redfin Corporation (NASDAQ:RDFN) to find out whether it was one of their high conviction long-term ideas.

Redfin Corporation (NASDAQ:RDFN) investors should pay attention to an increase in enthusiasm from smart money lately. RDFN was in 10 hedge funds’ portfolios at the end of June. There were 8 hedge funds in our database with RDFN positions at the end of the previous quarter. Our calculations also showed that RDFN isn’t among the 30 most popular stocks among hedge funds (see the video below).

What does smart money think about Redfin Corporation (NASDAQ:RDFN)?

At Q2’s end, a total of 10 of the hedge funds tracked by Insider Monkey were long this stock, a change of 25% from the previous quarter. Below, you can check out the change in hedge fund sentiment towards RDFN over the last 16 quarters. With the smart money’s sentiment swirling, there exists a select group of noteworthy hedge fund managers who were adding to their stakes considerably (or already accumulated large positions). 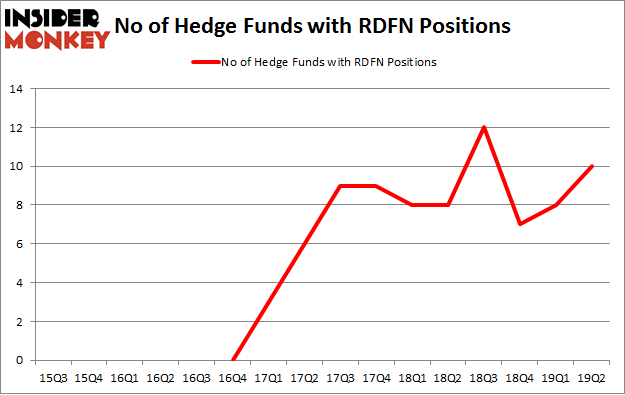 More specifically, Immersion Capital was the largest shareholder of Redfin Corporation (NASDAQ:RDFN), with a stake worth $86.5 million reported as of the end of March. Trailing Immersion Capital was Ancient Art (Teton Capital), which amassed a stake valued at $53.9 million. Tiger Global Management LLC, Citadel Investment Group, and Balyasny Asset Management were also very fond of the stock, giving the stock large weights in their portfolios.

As industrywide interest jumped, specific money managers have been driving this bullishness. Citadel Investment Group, managed by Ken Griffin, initiated the most outsized position in Redfin Corporation (NASDAQ:RDFN). Citadel Investment Group had $5.6 million invested in the company at the end of the quarter. Dmitry Balyasny’s Balyasny Asset Management also initiated a $3.3 million position during the quarter. The following funds were also among the new RDFN investors: Steve Cohen’s Point72 Asset Management and Israel Englander’s Millennium Management.

As you can see these stocks had an average of 17.25 hedge funds with bullish positions and the average amount invested in these stocks was $198 million. That figure was $179 million in RDFN’s case. Antero Resources Corporation (NYSE:AR) is the most popular stock in this table. On the other hand Park National Corporation (NYSE:PRK) is the least popular one with only 8 bullish hedge fund positions. Redfin Corporation (NASDAQ:RDFN) is not the least popular stock in this group but hedge fund interest is still below average. This is a slightly negative signal and we’d rather spend our time researching stocks that hedge funds are piling on. Our calculations showed that top 20 most popular stocks among hedge funds returned 24.4% in 2019 through September 30th and outperformed the S&P 500 ETF (SPY) by 4 percentage points. Unfortunately RDFN wasn’t nearly as popular as these 20 stocks (hedge fund sentiment was quite bearish); RDFN investors were disappointed as the stock returned -6.3% during the third quarter and underperformed the market. If you are interested in investing in large cap stocks with huge upside potential, you should check out the top 20 most popular stocks among hedge funds as many of these stocks already outperformed the market so far in 2019.