Concerns over rising interest rates and expected further rate increases have hit several stocks hard during the fourth quarter of 2018. Trends reversed 180 degrees during the first half of 2019 amid Powell’s pivot and optimistic expectations towards a trade deal with China. Hedge funds and institutional investors tracked by Insider Monkey usually invest a disproportionate amount of their portfolios in smaller cap stocks. We have been receiving indications that hedge funds were increasing their overall exposure in the second quarter and this is one of the factors behind the recent movements in major indices. In this article, we will take a closer look at hedge fund sentiment towards Reata Pharmaceuticals, Inc. (NASDAQ:RETA).

Is Reata Pharmaceuticals, Inc. (NASDAQ:RETA) the right investment to pursue these days? The best stock pickers are turned less bullish heading into Q3. The number of long hedge fund positions were trimmed by 3 recently. Our calculations also showed that RETA isn’t among the 30 most popular stocks among hedge funds (see the video below). Reeta was pitched at this year’s Sohn Conference by Cormorant Asset Management when it was trading around $80 and it traded around $80 for 5 months or so. It seems like investors didn’t find Cormorant’s thesis very credible as we didn’t see a big jump in hedge fund sentiment. Instead, some hedge funds took the small bounce in stock price as an opportunity to exit this stock. We listed these hedge funds below.

Heading into the third quarter of 2019, a total of 15 of the hedge funds tracked by Insider Monkey were long this stock, a change of -17% from the previous quarter. Below, you can check out the change in hedge fund sentiment towards RETA over the last 16 quarters. So, let’s review which hedge funds were among the top holders of the stock and which hedge funds were making big moves. 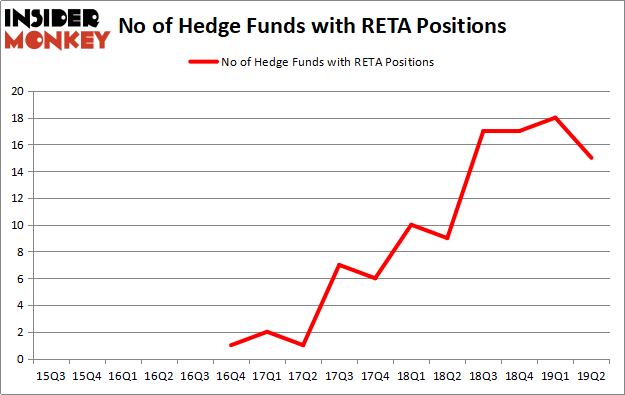 Among these funds, Cormorant Asset Management held the most valuable stake in Reata Pharmaceuticals, Inc. (NASDAQ:RETA), which was worth $76.1 million at the end of the second quarter. On the second spot was Farallon Capital which amassed $75.5 million worth of shares. Moreover, Millennium Management, Point72 Asset Management, and Driehaus Capital were also bullish on Reata Pharmaceuticals, Inc. (NASDAQ:RETA), allocating a large percentage of their portfolios to this stock.

Judging by the fact that Reata Pharmaceuticals, Inc. (NASDAQ:RETA) has faced falling interest from the aggregate hedge fund industry, it’s easy to see that there lies a certain “tier” of fund managers that slashed their positions entirely heading into Q3. It’s worth mentioning that Noam Gottesman’s GLG Partners sold off the biggest investment of the “upper crust” of funds tracked by Insider Monkey, totaling about $3.7 million in stock. D. E. Shaw’s fund, D E Shaw, also cut its stock, about $2.1 million worth. These moves are intriguing to say the least, as aggregate hedge fund interest dropped by 3 funds heading into Q3.

As you can see these stocks had an average of 11 hedge funds with bullish positions and the average amount invested in these stocks was $53 million. That figure was $287 million in RETA’s case. Glaukos Corporation (NYSE:GKOS) is the most popular stock in this table. On the other hand AU Optronics Corp. (NYSE:AUO) is the least popular one with only 7 bullish hedge fund positions. Reata Pharmaceuticals, Inc. (NASDAQ:RETA) is the most popular stock in this group together with GKOS. Even though RETA shareholders were disappointed as the stock returned -14.9% during the third quarter and underperformed the market, they have plenty to cheer in Q4 as the stock’s price surpassed $200.