Insider Monkey has processed numerous 13F filings of hedge funds and famous investors to create an extensive database of hedge fund holdings. The 13F filings show the hedge funds and investors’ positions as of the end of the third quarter. You can find write-ups about an individual hedge fund’s trades on numerous financial news websites. However, in this article we will take a look at their collective moves and analyze what the smart money thinks of Reata Pharmaceuticals, Inc. (NASDAQ:RETA) based on that data.

Reata Pharmaceuticals, Inc. (NASDAQ:RETA) has seen an increase in support from the world’s most elite money managers lately. RETA was in 17 hedge funds’ portfolios at the end of September. There were 9 hedge funds in our database with RETA positions at the end of the previous quarter. Our calculations also showed that reta isn’t among the 30 most popular stocks among hedge funds.

What does the smart money think about Reata Pharmaceuticals, Inc. (NASDAQ:RETA)?

At Q3’s end, a total of 17 of the hedge funds tracked by Insider Monkey were bullish on this stock, a change of 89% from the previous quarter. Below, you can check out the change in hedge fund sentiment towards RETA over the last 13 quarters. With the smart money’s sentiment swirling, there exists a few key hedge fund managers who were upping their stakes meaningfully (or already accumulated large positions). 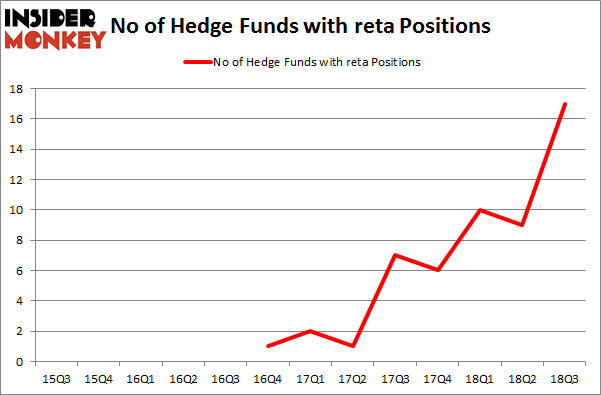 Among these funds, Point72 Asset Management held the most valuable stake in Reata Pharmaceuticals, Inc. (NASDAQ:RETA), which was worth $61.3 million at the end of the third quarter. On the second spot was Farallon Capital which amassed $55.1 million worth of shares. Moreover, Cormorant Asset Management, Deerfield Management, and Driehaus Capital were also bullish on Reata Pharmaceuticals, Inc. (NASDAQ:RETA), allocating a large percentage of their portfolios to this stock.

As you can see these stocks had an average of 12.5 hedge funds with bullish positions and the average amount invested in these stocks was $130 million. That figure was $242 million in RETA’s case. WildHorse Resource Development Corporation (NYSE:WRD) is the most popular stock in this table. On the other hand Noah Holdings Limited (NYSE:NOAH) is the least popular one with only 8 bullish hedge fund positions. Reata Pharmaceuticals, Inc. (NASDAQ:RETA) is not the most popular stock in this group but hedge fund interest is still above average. This is a slightly positive signal but we’d rather spend our time researching stocks that hedge funds are piling on. In this regard WRD might be a better candidate to consider a long position.