Ralph Lauren Corporation (NYSE:RL) has seen an increase in hedge fund interest in recent months. Our calculations also showed that RL isn’t among the 30 most popular stocks among hedge funds.

What have hedge funds been doing with Ralph Lauren Corporation (NYSE:RL)? 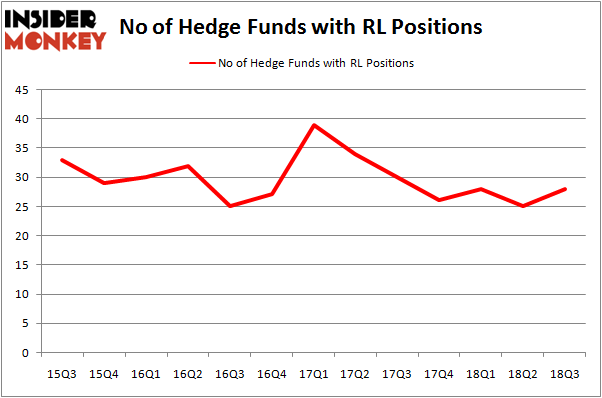 Among these funds, Renaissance Technologies held the most valuable stake in Ralph Lauren Corporation (NYSE:RL), which was worth $365.5 million at the end of the third quarter. On the second spot was AQR Capital Management which amassed $134.7 million worth of shares. Moreover, Scopus Asset Management, Point72 Asset Management, and Millennium Management were also bullish on Ralph Lauren Corporation (NYSE:RL), allocating a large percentage of their portfolios to this stock.

With a general bullishness amongst the heavyweights, key hedge funds have jumped into Ralph Lauren Corporation (NYSE:RL) headfirst. Scopus Asset Management, managed by Alexander Mitchell, initiated the biggest call position in Ralph Lauren Corporation (NYSE:RL). Scopus Asset Management had $70.5 million invested in the company at the end of the quarter. Steven Boyd’s Armistice Capital also made a $30 million investment in the stock during the quarter. The other funds with new positions in the stock are Louis Bacon’s Moore Global Investments, Benjamin A. Smith’s Laurion Capital Management, and Dmitry Balyasny’s Balyasny Asset Management.

As you can see these stocks had an average of 29 hedge funds with bullish positions and the average amount invested in these stocks was $731 million. That figure was $990 million in RL’s case. Neurocrine Biosciences, Inc. (NASDAQ:NBIX) is the most popular stock in this table. On the other hand Hologic, Inc. (NASDAQ:HOLX) is the least popular one with only 22 bullish hedge fund positions. Ralph Lauren Corporation (NYSE:RL) is not the least popular stock in this group but hedge fund interest is still below average. This is a slightly negative signal and we’d rather spend our time researching stocks that hedge funds are piling on. In this regard NBIX might be a better candidate to consider a long position.

Incandescent Capital Gives Its View on Heritage Insurance
Monthly Newsletter Strategy
Download a free copy of our newsletter and see the details inside!
Hedge Fund Resource Center
Related News
7 Best Sunglasses Stocks to Invest in 2017 10 Most Popular Clothing Brands for Guys 11 Most Ethical Fair Trade Clothing Companies in US and Canada 15 Most Expensive Perfume Brands in The World Top 10 Best Selling Men’s Shirt Brands in The World Top 10 Apparel Brands in the World Top 15 High End Retail Clothing Stores in America The 10 Best Islands to Visit in 2019 5 Most Socially Responsible Companies in America 5 Ways You Can Eliminate Credit Card Debt
Billionaire Hedge Funds