Searching for high yields is a great way to discover new stock ideas. Sometimes, however, a high yield is only a temporary pop over the lifetime of an investment. Today we’ll be examining five high-yielding master limited partnerships, taking a closer look at the distribution coverage ratio and distribution growth record for each one.

It’s not a pretty-looking group, that’s for sure. The worst off here is clearly Calumet Specialty Products Partners, L.P (NASDAQ:CLMT), which posted negative distributable cash flow in the second quarter and therefore couldn’t cover one red cent of the $47.4 million it paid out in distributions.

The only MLP on this list that passes the coverage ratio test is PVR Partners LP (NYSE:PVR). Though it looks outstanding here, in the grand scheme of the MLP universe, there are partnerships with coverage ratios that provide much more wiggle room.

Now let’s take a look at distribution growth, for our five high-yielders. The chart below shows the percentage change over the last five years: 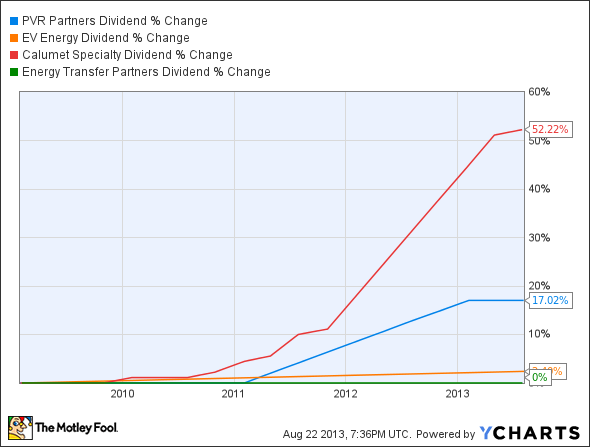 Calumet Specialty Products Partners, L.P (NASDAQ:CLMT) looks great here, but the rest of our group has not done a tremendous job of increasing its distributions over the past five years.

You’ll notice Southcross Energy Partners LP (NYSE:SXE) is not on this list, because it only went public last November and does not have five years of distribution history. It has issued distributions for three quarters, posting a 67% increase between its first and second distributions, and holding it flat between its second and third.

Energy Transfer Partners LP (NYSE:ETP) made a big splash earlier this month when it announced it would be increasing its distribution next quarter, the first increase in five years. After much speculation as to when management would increase its payout, limited partners will be rewarded with a $0.01 increase per unit for the third quarter, and another $0.01 increase on top of that for the fourth quarter.

You can barely make out EV Energy Partners, L.P. (NASDAQ:EVEP)’ label on the chart, but it’s 2.4%. Certainly nothing to write home about at first blush, but the partnership has actually increased its distribution every quarter since February of 2007. It doesn’t wow us because since 2009, the increases have only been by $0.001.