Most investors tend to think that hedge funds and other asset managers are worthless, as they cannot beat even simple index fund portfolios. In fact, most people expect hedge funds to compete with and outperform the bull market that we have witnessed over the past few years. However, hedge funds are generally partially hedged and aim at delivering attractive risk-adjusted returns rather than following the ups and downs of equity markets hoping that they will outperform the broader market. Our research shows that hedge funds do have great stock picking skills, so let’s take a glance at the smart money sentiment towards Puma Biotechnology Inc (NASDAQ:PBYI).

Puma Biotechnology Inc (NASDAQ:PBYI) shares haven’t seen a lot of action during the third quarter. Overall, hedge fund sentiment was unchanged. The stock was in 22 hedge funds’ portfolios at the end of the third quarter of 2018. The level and the change in hedge fund popularity aren’t the only variables you need to analyze to decipher hedge funds’ perspectives. A stock may witness a boost in popularity but it may still be less popular than similarly priced stocks. That’s why at the end of this article we will examine companies such as SemGroup Corp (NYSE:SEMG), Noble Corporation plc (NYSE:NE), and Phibro Animal Health Corp (NASDAQ:PAHC) to gather more data points. 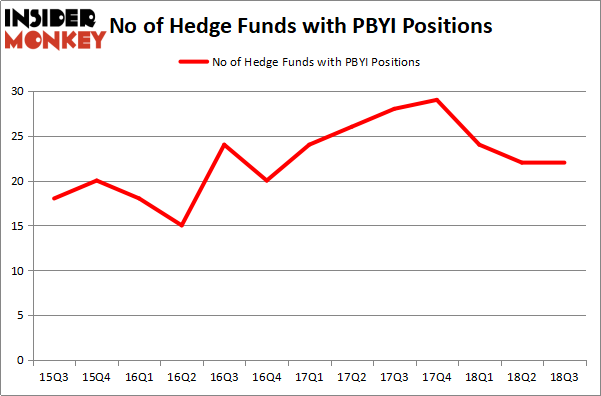 When looking at the institutional investors followed by Insider Monkey, OrbiMed Advisors, managed by Samuel Isaly, holds the biggest position in Puma Biotechnology Inc (NASDAQ:PBYI). OrbiMed Advisors has a $124 million position in the stock, comprising 1.5% of its 13F portfolio. The second most bullish fund manager is Consonance Capital Management, led by Mitchell Blutt, holding a $105.6 million position; the fund has 5.7% of its 13F portfolio invested in the stock. Other professional money managers with similar optimism include Christopher James’s Partner Fund Management, Behzad Aghazadeh’s venBio Select Advisor and Ken Griffin’s Citadel Investment Group.

Because Puma Biotechnology Inc (NASDAQ:PBYI) has faced a decline in interest from the aggregate hedge fund industry, we can see that there lies a certain “tier” of hedge funds who sold off their entire stakes heading into Q3. It’s worth mentioning that Joseph Edelman’s Perceptive Advisors dropped the biggest investment of all the hedgies followed by Insider Monkey, totaling close to $27.5 million in call options. Jason Karp’s fund, Tourbillon Capital Partners, also said goodbye to its call options, about $17.7 million worth. These bearish behaviors are intriguing to say the least, as aggregate hedge fund interest stayed the same (this is a bearish signal in our experience).

As you can see these stocks had an average of 16.5 hedge funds with bullish positions and the average amount invested in these stocks was $147 million. That figure was $622 million in PBYI’s case. Noble Corporation (NYSE:NE) is the most popular stock in this table. On the other hand SemGroup Corp (NYSE:SEMG) is the least popular one with only 7 bullish hedge fund positions. Compared to these stocks Puma Biotechnology Inc (NASDAQ:PBYI) is more popular among hedge funds. Considering that hedge funds are fond of this stock in relation to its market cap peers, it may be a good idea to analyze it in detail and potentially include it in your portfolio.

Is Globalstar, Inc. (GSAT) Going to Burn These Hedge Funds?
Monthly Newsletter Strategy
Download a free copy of our newsletter and see the details inside!
Hedge Fund Resource Center
Related News
Market Movers Today: W W Grainger Inc (GWW), Cerus Corporation (CERS), Texas Instruments Incorporated (TXN), and More Check Out These 34 Stories To Find Out What’s Happening In The Financial Markets Today Here’s How This Week Has Started For The Financial Markets Financial Markets Snapshot: Today’s 35 Major Stories from the World of Finance What’s Going On In The Finance World Today? Puma Biotechnology Inc (PBYI): Are Hedge Funds Right About This Stock? Five Reasons You Need a Day-Trading Mentor 15 Most Important Medical Discoveries of 2018 The 10 Best Islands to Visit in 2019
Billionaire Hedge Funds