Since early May, the major home builders have been in free fall. The reason for the fall? Rising interest rates are supposedly threatening the housing rebound. Low rates, were in part, what helped to spur a rebound in housing demand. But rising interest rates could slow the demand for mortgages, leading  to slowing demand for new houses, which pushed the major home builders down over 15% in the past couple of months. 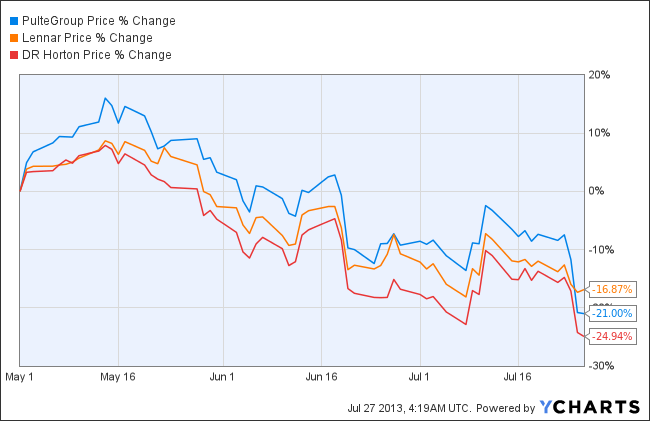 But could this be a great opportunity to jump into the homebuilders?

PulteGroup, Inc. (NYSE:PHM) is the largest U.S. homebuilder, based on revenue. The stock tumbled another 10% last week offering investors another great buying opportunity.

In my long case for PulteGroup, Inc. (NYSE:PHM), I found several reasons to love the stock, including its estimated $2.4 billion deferred tax asset that’s not currently on the books. Once booked, PulteGroup will trade well below its peers on a book-value basis. Beyond just the valuation, PulteGroup has other tailwinds that include a diversified geographical revenue stream and diversified target base.

PulteGroup, Inc. (NYSE:PHM) also initiated a $0.05 quarterly dividend last week, which is a 1.2% dividend yield. This annual dividend payout will be under only $80 million, where the company boasts some $1.7 billion in cash. To boot, the home builder also authorized a stock-repurchase program of $350 million.

Lennar Corporation (NYSE:LEN) is one of the largest, most geographically diversified U.S. home builders. Revenue is expected to be up 42% in fiscal 2013 after an already robust sales jump of 33% in 2012. For the March-ended quarter, Lennar posted EPS of $0.43, versus $0.21 in the same quarter last year, on the back of a 53% increase in revenue.

One of the key advantages for Lennar Corporation (NYSE:LEN) is the fact that it managed to amass a solid land position during the financial crisis. The company believes it has enough land to meet its home deliveries through 2014.

The other positive is that Lennar Corporation (NYSE:LEN) focuses on the higher-margin, well-positioned, communities, allowing it to avoid tertiary markets where price is the only driver.