The Insider Monkey team has completed processing the quarterly 13F filings for the June quarter submitted by the hedge funds and other money managers included in our extensive database. Most hedge fund investors experienced strong gains on the back of a strong market performance, which certainly propelled them to adjust their equity holdings so as to maintain the desired risk profile. As a result, the relevancy of these public filings and their content is indisputable, as they may reveal numerous high-potential stocks. The following article will discuss the smart money sentiment towards PulteGroup, Inc. (NYSE:PHM).

PulteGroup, Inc. (NYSE:PHM) shareholders have witnessed an increase in activity from the world’s largest hedge funds recently. PHM was in 31 hedge funds’ portfolios at the end of the second quarter of 2019. There were 25 hedge funds in our database with PHM holdings at the end of the previous quarter. Our calculations also showed that PHM isn’t among the 30 most popular stocks among hedge funds (see the video below). 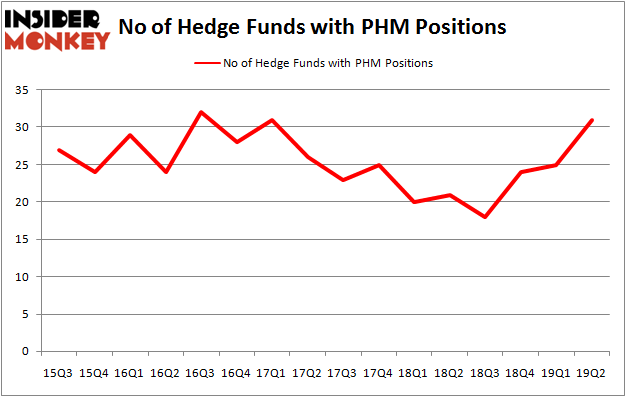 Unlike this former hedge fund manager who is convinced Dow will soar past 40000, our long-short investment strategy doesn’t rely on bull markets to deliver double digit returns. We only rely on hedge fund buy/sell signals. Let’s take a look at the latest hedge fund action surrounding PulteGroup, Inc. (NYSE:PHM).

Among these funds, AQR Capital Management held the most valuable stake in PulteGroup, Inc. (NYSE:PHM), which was worth $265.8 million at the end of the second quarter. On the second spot was Greenhaven Associates which amassed $174.9 million worth of shares. Moreover, GLG Partners, Samlyn Capital, and Miller Value Partners were also bullish on PulteGroup, Inc. (NYSE:PHM), allocating a large percentage of their portfolios to this stock.

With a general bullishness amongst the heavyweights, some big names have been driving this bullishness. Miller Value Partners, managed by Bill Miller, initiated the largest position in PulteGroup, Inc. (NYSE:PHM). Miller Value Partners had $60.4 million invested in the company at the end of the quarter. Bruce Kovner’s Caxton Associates LP also made a $7.8 million investment in the stock during the quarter. The other funds with new positions in the stock are Ken Heebner’s Capital Growth Management, Minhua Zhang’s Weld Capital Management, and Alec Litowitz and Ross Laser’s Magnetar Capital.

Let’s now take a look at hedge fund activity in other stocks – not necessarily in the same industry as PulteGroup, Inc. (NYSE:PHM) but similarly valued. These stocks are CPFL Energia S.A. (NYSE:CPL), WEX Inc (NYSE:WEX), The Interpublic Group of Companies, Inc. (NYSE:IPG), and Universal Display Corporation (NASDAQ:OLED). This group of stocks’ market valuations are closest to PHM’s market valuation.

As you can see these stocks had an average of 21 hedge funds with bullish positions and the average amount invested in these stocks was $392 million. That figure was $838 million in PHM’s case. The Interpublic Group of Companies, Inc. (NYSE:IPG) is the most popular stock in this table. On the other hand CPFL Energia S.A. (NYSE:CPL) is the least popular one with only 4 bullish hedge fund positions. PulteGroup, Inc. (NYSE:PHM) is not the most popular stock in this group but hedge fund interest is still above average. Our calculations showed that top 20 most popular stocks among hedge funds returned 24.4% in 2019 through September 30th and outperformed the S&P 500 ETF (SPY) by 4 percentage points. Hedge funds were also right about betting on PHM as the stock returned 16% during the third quarter and outperformed the market. Hedge funds were rewarded for their relative bullishness.