Public Storage (NYSE:PSA), Extra Space Storage, Inc. (NYSE:EXR), CubeSmart (NYSE:CUBE), and Sovran Self Storage Inc (NYSE:SSS) make up the self-storage REIT universe. This universe is well worth exploring for investors interested in both growth and income.

I recently wrote an article explaining how this sector has embraced technology during the past five years while outperforming the S&P 500. There are several reasons I feel Extra Space Storage, Inc. (NYSE:EXR) and Public Storage (NYSE:PSA) will take the spotlight moving forward.

Here is a look back at the last five years 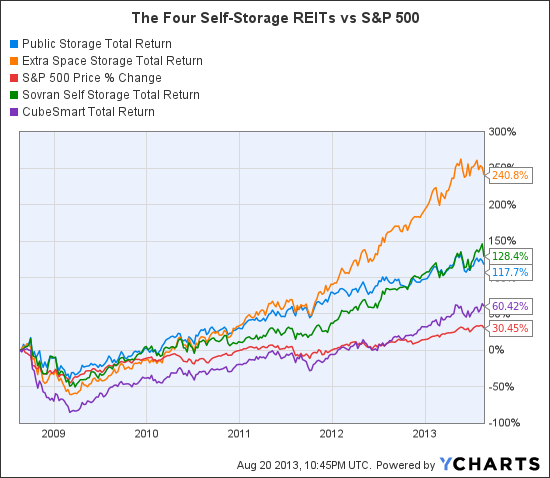 The highly fragmented U.S. self-storage universe contains about 50,000 facilities. The vast majority of these are private company owner-operators. The five largest public companies that operate in this sector account for about 12% of the total — there is plenty of room for growth. In addition to the four REITs, AMERCO (NASDAQ:UHAL) is a public company that operates 1,200 self-storage sites of 41 million square feet, in addition to its huge fleet of U-Haul rental trucks.

Who is best positioned for future success?

There are distinct differences in how each of these REITs approaches the U.S. self-storage market: strategically, operationally, geographically, and financially.

These two REITs have some challenges moving forward

Sovran Self Storage Inc (NYSE:SSS) has a market cap of $2.2 billion. SSS operates 471 self-storage properties in 25 states under the name “Uncle Bob’s Self Storage.” However, of the 362 facilities it owns, it derives 40% of its earnings from just two states: Texas and Florida. It didn’t close on any acquisitions for the first half of 2013 and currently only has three properties under contract.

Sovran currently has 24 properties under third-party management (99 if you add in joint ventures), which is less than CubeSmart (NYSE:CUBE), and way behind leader Extra Space Storage, Inc. (NYSE:EXR). Although SSS just raised its quarterly dividend from $0.48 to $0.53 per share, the annual yield is 2.96%, which puts it in the bottom half on that metric as well.

CubeSmart has a market cap of $2.3 billion and owns 386 facilities comprising 25.8 million square feet located in 22 states and the District of Columbia. It manages 133 facilities for third parties, having added 10 new management contracts in the first half of the year.

During the first half of 2013, 11 assets were acquired for over $107 million, and 13 assets were sold for roughly $36 million. During 2012, CubeSmart purchased 14 properties formerly under third-party management. The company is now focusing on “core urban markets.”

Despite great performance this quarter, CubeSmart’s operating margin was only 14%, and its profit margin was slightly negative (0.20%). This puts the company dead last among its peers. Its quarterly dividend of $0.11 per share, an annual yield of 2.54%, is also the lowest of the self-storage REITs.