The Insider Monkey team has completed processing the quarterly 13F filings for the September quarter submitted by the hedge funds and other money managers included in our extensive database. Most hedge fund investors experienced strong gains on the back of a strong market performance, which certainly propelled them to adjust their equity holdings so as to maintain the desired risk profile. As a result, the relevancy of these public filings and their content is indisputable, as they may reveal numerous high-potential stocks. The following article will discuss the smart money sentiment towards Prudential Financial Inc (NYSE:PRU).

Is Prudential Financial Inc (NYSE:PRU) a good investment now? Money managers are becoming less hopeful. The number of bullish hedge fund bets were trimmed by 6 in recent months. Our calculations also showed that PRU isn’t among the 30 most popular stocks among hedge funds (click for Q3 rankings and see the video below for Q2 rankings). PRU was in 27 hedge funds’ portfolios at the end of the third quarter of 2019. There were 33 hedge funds in our database with PRU holdings at the end of the previous quarter.

Unlike the largest US hedge funds that are convinced Dow will soar past 40,000 or the world’s most bearish hedge fund that’s more convinced than ever that a crash is coming, our long-short investment strategy doesn’t rely on bull or bear markets to deliver double digit returns. We only rely on the best performing hedge funds‘ buy/sell signals. We’re going to take a look at the latest hedge fund action regarding Prudential Financial Inc (NYSE:PRU).

At the end of the third quarter, a total of 27 of the hedge funds tracked by Insider Monkey held long positions in this stock, a change of -18% from the previous quarter. The graph below displays the number of hedge funds with bullish position in PRU over the last 17 quarters. With the smart money’s positions undergoing their usual ebb and flow, there exists a select group of notable hedge fund managers who were boosting their holdings considerably (or already accumulated large positions). 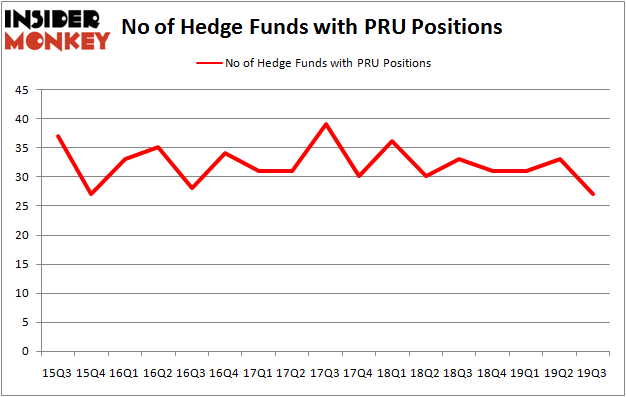 According to Insider Monkey’s hedge fund database, Peter Rathjens, Bruce Clarke and John Campbell’s Arrowstreet Capital has the biggest position in Prudential Financial Inc (NYSE:PRU), worth close to $234.3 million, corresponding to 0.5% of its total 13F portfolio. The second largest stake is held by Two Sigma Advisors, led by John Overdeck and David Siegel, holding a $72.3 million position; the fund has 0.2% of its 13F portfolio invested in the stock. Other hedge funds and institutional investors with similar optimism contain Cliff Asness’s AQR Capital Management, Phill Gross and Robert Atchinson’s Adage Capital Management and David Harding’s Winton Capital Management. In terms of the portfolio weights assigned to each position Gabalex Capital allocated the biggest weight to Prudential Financial Inc (NYSE:PRU), around 6.06% of its portfolio. Redwood Capital Management is also relatively very bullish on the stock, dishing out 1.96 percent of its 13F equity portfolio to PRU.

Due to the fact that Prudential Financial Inc (NYSE:PRU) has witnessed declining sentiment from the entirety of the hedge funds we track, it’s easy to see that there was a specific group of funds that slashed their entire stakes by the end of the third quarter. Interestingly, Clint Carlson’s Carlson Capital cut the biggest investment of the 750 funds monitored by Insider Monkey, valued at close to $21.1 million in stock, and Ron Bobman’s Capital Returns Management was right behind this move, as the fund said goodbye to about $14.3 million worth. These bearish behaviors are intriguing to say the least, as total hedge fund interest dropped by 6 funds by the end of the third quarter.

As you can see these stocks had an average of 34.25 hedge funds with bullish positions and the average amount invested in these stocks was $1230 million. That figure was $577 million in PRU’s case. The Allstate Corporation (NYSE:ALL) is the most popular stock in this table. On the other hand Manulife Financial Corporation (NYSE:MFC) is the least popular one with only 17 bullish hedge fund positions. Prudential Financial Inc (NYSE:PRU) is not the least popular stock in this group but hedge fund interest is still below average. This is a slightly negative signal and we’d rather spend our time researching stocks that hedge funds are piling on. Our calculations showed that top 20 most popular stocks among hedge funds returned 37.4% in 2019 through the end of November and outperformed the S&P 500 ETF (SPY) by 9.9 percentage points. Unfortunately PRU wasn’t nearly as popular as these 20 stocks (hedge fund sentiment was quite bearish); PRU investors were disappointed as the stock returned 5.2% during the first two months of the fourth quarter and underperformed the market. If you are interested in investing in large cap stocks with huge upside potential, you should check out the top 20 most popular stocks among hedge funds as 70 percent of these stocks already outperformed the market in Q4.