Published on September 20, 2013 at 11:15 am by Kerrisdale Capital Management in Dividend Stocks, News

We believe the stock is overlooked by investors given the modest €150m market capitalization and a lack of bulge-bracket sellside coverage. An imminent merger with an Oaktree Capital Group LLC (NYSE:OAK) portfolio company has caused shareholder activists to publicly engage with management. This spirited public discussion, along with a September 24th shareholder vote on the potential Oaktree merger, should allow Prime Office to soon unlock its true value. With the potential of a sweetened Oaktree bid, a reversal of planned dilutive equity raises, and/or a possible liquidation at NAV, all of which are potential outcomes of this ongoing debate, we believe this stock offers many ways to win.

Note: By excluding the net swap liability as of June 30th, 2013 from NAV, we’ve assumed that the current book value is equivalent to net asset value throughout this report.

Over the last few months, Prime Office’s share price has been continually punished by a market that loathes the uncertainty tied to an upcoming merger vote with an Oaktree portfolio company. On May 8th, 2013, Prime Office announced that it had begun initial talks to merge with OCM German Real Estate (“Acorn”), an Oaktree portfolio company with 51 German multi-tenant properties and an in-house leasing team that managed Acorn’s vacancy down to 13%.

With its June 2011 broken IPO leaving Prime Office with a “REIT ratio” (book value / market value of properties) below the 45% threshold required under German REIT laws, investors initially applauded the Oaktree deal, believing that a larger, better-managed combined company could attract more institutional investors and reduce Prime’s discount to NAV. Prime’s shares were propelled from €3.16 to €4.25 in the week after the announcement. Prime Office shares have since declined by over 30% due to a Q2 2013 NAV write-down from €7.49 to €6.62 and a punitive exchange ratio for the Oaktree deal, which will further reduce NAV to €5.57. Management has also given their intention to complete a €125 – 175m capital raise once the deal closes. If done near the current share price of €2.98, this equity raise would be extremely dilutive to Prime/Acorn’s combined NAV of €5.57. Management would utilize this capital to pay an exorbitant €18m of deal expenses, €20-25m in transfer taxes, €20m of swap breakages, and most significantly, add equity capital to Acorn’s levered balance sheet.

The €125 – 175m capital raise was announced in the Q2 2012 press release, but thereafter, Prime’s CEO backed down from the range on the call. He clarified the press release by stating, “We will be looking to do a capital increase, [and] keep it as small as possible.” It is our opinion that management should reduce the size of the equity issuance until after the share price has recovered to at least €3.50 – 4.00, thus reducing the potential dilution. Thanks to the poor exchange ratio and the overhang of a major equity raise, it remains uncertain whether Prime Office will obtain the 75% of the shareholder vote (of those present at the annual general meeting) necessary to close the deal. 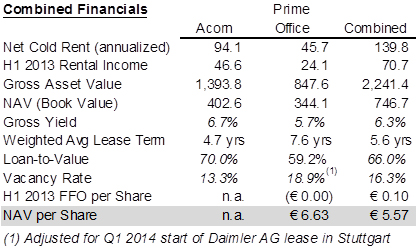 While the painful exchange ratio, along with the likelihood of a dilutive equity raise, has caused many investors to abandon the stock, the benefits of the Oaktree deal are clear: i) the combined company would become the largest German REIT; ii) Oaktree’s relationships with the banks should allow the combined company to refinance loans at lower rates; iii) Oaktree will add a team of full-time leasing agents, an improvement from Prime’s reliance on third-party brokers and; iv) a combined €500m+ market capitalization may attract broader global research coverage. The sum of these benefits should yield a reduced Price/NAV discount. At Prime’s current share price of €2.98, we calculate that the Oaktree deal offers upside of more than 35% even after accounting for a €150m dilutive equity raise at €3/share. A higher offering price and/or a decrease in the amount of new capital raised would add further upside.

The possibility of the 30%+ upside offered by the Oaktree deal is attractive on its own. And yet two alternative scenarios may be even more lucrative. Capstone Equities, a real estate public and private equity firm, issued a letter to the Board on August 22nd expressing their displeasure with the current process. Capstone conducted a bottoms-up analysis of Prime’s office portfolio and concluded that the company is worth in excess of €6.00 per share. Believing the Oaktree merger ratio to be inadequate, Capstone implores the Prime Office supervisory Board to hire an investment banker to conduct a full strategic alternatives process. The entry of a motivated activist shareholder may pressure Prime’s management to renegotiate the deal with Oaktree, or even better, liquidate the company near NAV. We roughly estimate that a liquidation of the portfolio yields 50-70% upside for shareholders. This assumption includes a 10% discount to the gross asset value to account for execution risks, tax leakage, and transaction costs.

Lastly, there is the very real possibility that Prime Office would continue to trade as a standalone asset. While management is encouraging shareholders to vote for the Oaktree deal, Prime Office appears cheap on a standalone basis compared to its public peers. The closest peer is Alstria REIT, a similar German CRE company with 84 properties valued at €1.6bn. Alstria trades a much lower 10.5% discount to NAV and just a 3.6% discount to gross asset value. The stock is adored by the sellside for its low leverage and a stable property portfolio generating FFO yields around 6%. Alstria shrewdly directs investors to its Net LTV (loan-to-value), rather than a Gross LTV. The former nets out cash from total debt balance. But no matter how one measures LTV, Prime Office and Alstria look remarkably similar. Alstria has a 50% Net LTV and 59.8% Gross LTV compared to only 52% and 59.2%, respectively, at Prime Office. When viewed in this light, the concern around Prime’s leverage is a red herring. Moreover, Prime was able to refinance over €200m of loans during 2012, proving that German credit markets are receptive to the company. With a net loan-to-value of 52%, Prime’s remaining loans appear adequately covered. We therefore believe that Prime Office standalone should trade at a 20 – 25% discount to NAV, still a discount to Alstria’s 10.5%, but much lower than the other comparable company, DIC Asset AG. By either selling or leasing its vacant buildings in Frankfurt and Dusseldorf, Prime should be able to narrow the current valuation gap. At a 25% discount to NAV, Prime shares would be undervalued by 40-45% on a standalone basis. This scenario includes a €50m dilutive equity raise to account for debt service and renovation capex on the vacant buildings in Frankfurt and Dusseldorf. 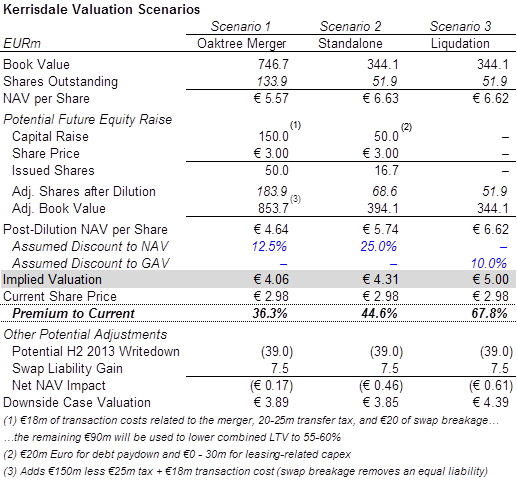 Barring a second global real estate collapse, we believe that Prime Office’s NAV offers substantial downside protection under any of the above scenarios. And by assuming that Prime Office will be forced to raise equity at the distressed share price of €3.00, we have made very conservative valuation assumptions. Once the uncertainty surrounding the Oaktree deal is removed and management provides further guidance around a potential equity raise, investors should become more comfortable with the investment story, thereby reducing the spread between share price and NAV. Further upside catalysts include a sweetened exchange ratio from Oaktree, a successful activist campaign leading to liquidation, and/or a competing strategic bid for the assets.

Other valuation considerations include €39m of possible H2 2013 writedowns if Prime decides to convert the €119m Frankfurt property (Westend-Ensemble) property to residential space. On the Q2 2013 call, management backed down slightly from this figure, arguing that it’s only an early-stage estimate: “we’ve just started…discussions with the City of Frankfurt…but we don’t have a clear figure. It could be slightly less. If there’s a huge demand for a residential, we may do it in a joint-venture with the developer.” Besides Frankfurt, management doesn’t believe there will be any further substantial writedowns to the portfolio. Kempen, a German research firm, had modeled €80m of negative revaluation for 2013-2016, €61m of which was already recognized in Q2 2013. If a merger goes through, we suspect that Oaktree may reverse the decision to convert the Westend-Ensemble into residential property. Residential properties earn lower yields than commercial space, and a combined company with a large NOL (net operating loss) balance will be less concerned about the REIT ratio, giving it more time to seek tenants before resorting to a sale.

This hypothetical Frankfurt writedown should be partially mitigated by a positive revaluation of Prime’s interest rate swaps. Prime’s interest rate swaps were first put in place to protect against rising rates, but these reversed into a €62.3m liability after Germany’s 10-year Bund fell below 1.2% in May 2013. This liability has now begun to swing in Prime’s favor on the perceived change in the Federal Reserve’s monetary policy. According to Prime’s 2012 Annual Report, “an upward shift of 25 basis points in the yield curve as of 31 December 2012 would result in a €9.7m increase in the market value of derivatives.” German Bund yields rose to a 17-month high in August on continued expansion of the German economy. By our measures, the yield on the German 10-year Bund has increased by about 15-20bps since Prime Office’s June 30th swap liability mark. Using this and the guidance in the Annual report, we’ve calculated a positive €7.5 gain from swaps. This gain will expand if interest rates continue to rise.

Despite the many positives that the Acorn combination offers, we consider the severe dilution incurred in the deal to be cause for concern. Not only will Prime’s NAV be reduced from €6.62 to €5.57 thanks to the unfavorable exchange ratio, but the addition of Acorn’s 70% LTV portfolio (see Q2 call transcript) will also materially increase the combined company’s loan-to-value. This would necessitate the €150m equity raise to reduce the LTV to the 55 – 60% range, leaving the combined company with a €4.64/share book value. The market has reacted to this potential equity raise by selling off shares in a reflexive manner, as a lower share price translates to further NAV dilution. However, this reflexivity would also work as Prime’s share price rises. For example, if the €150 million capital raise is done at €4.00, the premium in Scenario 1 jumps from 36% to over 46%. A better exchange ratio, combined with a commitment by management to only execute a capital raise at a higher share price, would make us more supportive of the Oaktree deal.

Below is the embedded full report on Prime Office. 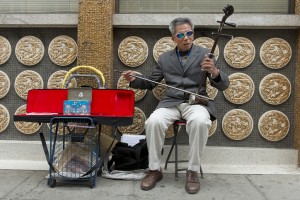 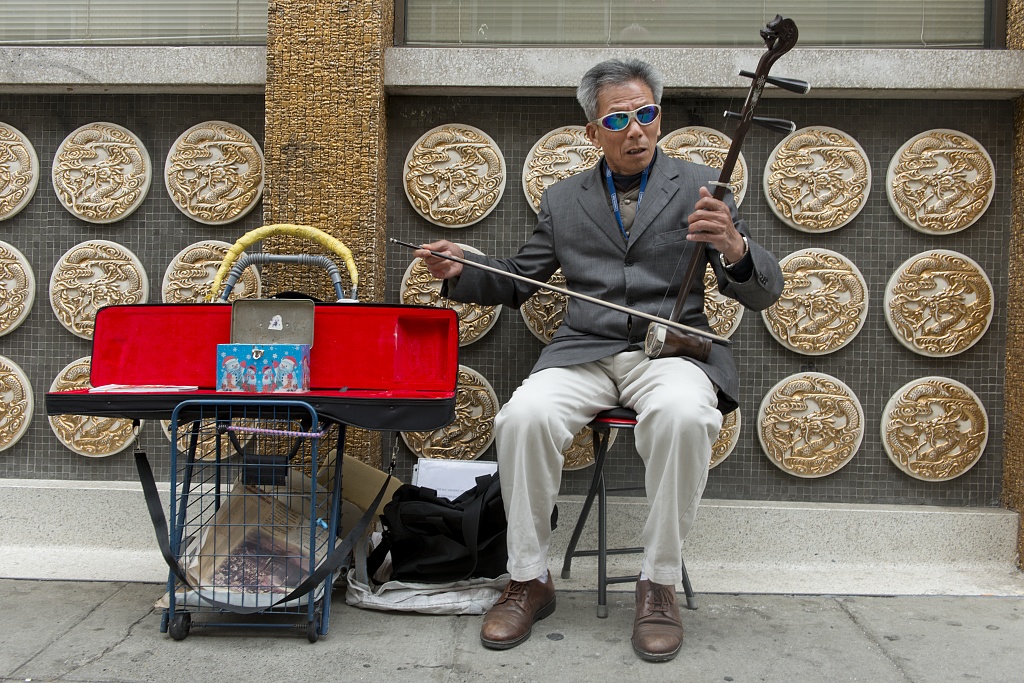