Philip Morris International Inc. (NYSE:PM) had a tough second quarter, mainly due to adverse currency fluctuations. Gross revenue, after accounting for excise taxes, came in at $7.917 billion, missing the $8.17 billion consensus by a wide margin. But with almost 29% of global market share excluding the U.S. and China, and significant exposure to emerging economies where there is an increasing population of smokers, the owner of Marlboro might simply be facing bad momentum. Is Philip Morris International Inc. (NYSE:PM) a buy? 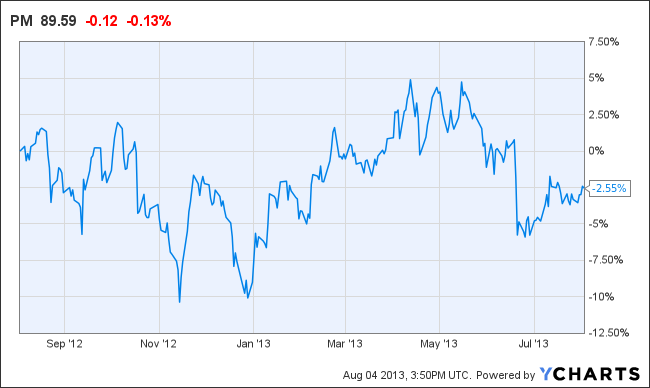 Let’s start with the bad news. Philip Morris International Inc. (NYSE:PM) had to, once more, cut its 2013 earnings outlook by another 2%. As you can see in the stock performance for the past month, the market did not take this lightly. The good news is that most of the reasons why Philip Morris had to give a pessimistic outlook are exogenous, macroeconomic reasons: the strengthening of the U.S. dollar, the recession in Europe and tax increases in the Philippines and Russia all had a negative influence on sales volume.

Will it get better?

You bet it will. Although the proportion of Americans who smoke has been in sharp decline (now only 20% of Americans smoke) due to increasing health and cancer awareness, the situation is different in emerging economies, where in some cases the population of smokers is increasing. In these economies, the proportion of smokers consuming Philip Morris products (Marlboro) is still low, but as their average income increases, I expect a shift to Philip Morris International Inc. (NYSE:PM) products, as iconic brands like Marlboro remain pretty strong and increase social status.

A key market is Asia, where PMI cigarette volume grew 1.5%. In Indonesia industry volume increased by 3.5% in the second quarter while Philip Morris volume grew by 6.0%. As for Japan, the overall cigarette industry volume declined by 2% in the last quarter, and PMI volume is under pressure. However, I believe the strong pipeline of innovative products will protect the market share achieved so far.

Finally, although increasing unemployment is hurting the budget of European smokers, Philip Morris International Inc. (NYSE:PM) is managing to grow, as evidenced by the 0.7% increase in PMI (market share of cigarettes), the 0.5% increase in Marlboro sales and the 1.2% increase in fine cut tobacco sales. Remember that Philip Morris already has 29% global market share and is probably the largest publicly traded tobacco company in the world. However, recent figures suggest that even after reaching a huge scale in global operations, Philip Morris can keep growing.

The decline in cash flow and high debt ratio are temporary

Due to adverse currency movements and a decrease in net income, Philip Morris International Inc. (NYSE:PM)’ free cash low was down $901 million, or about 18.4% in the first half of 2013. In order to pay its dividend and continue share repurchases, Philip Morris had to use debt, which further increased the debt ratio. Notice, however, that the company’s total debt decreased by $99 million. The reason why its debt ratio increased is because the decrease of cash flow was proportionally more important.