Is Penumbra Inc (PEN) A Good Investment According To Hedge Funds?

Penumbra Inc (NYSE:PEN) has experienced an increase in enthusiasm from smart money recently. Our calculations also showed that PEN isn’t among the 30 most popular stocks among hedge funds.

In the eyes of most stock holders, hedge funds are assumed to be underperforming, old investment tools of years past. While there are over 8,000 funds in operation at present, We hone in on the crème de la crème of this club, about 700 funds. These hedge fund managers administer the majority of the smart money’s total asset base, and by keeping track of their first-class stock picks, Insider Monkey has found a few investment strategies that have historically outrun the market. Insider Monkey’s flagship hedge fund strategy outpaced the S&P 500 index by 6 percentage points a year since its inception in May 2014 through early November 2018. We were able to generate large returns even by identifying short candidates. Our portfolio of short stocks lost 24% since February 2017 (through December 3rd) even though the market was up nearly 23% during the same period. We just shared a list of 11 short targets in our latest quarterly update.

At Q3’s end, a total of 25 of the hedge funds tracked by Insider Monkey were bullish on this stock, a change of 4% from one quarter earlier. Below, you can check out the change in hedge fund sentiment towards PEN over the last 13 quarters. With hedgies’ positions undergoing their usual ebb and flow, there exists an “upper tier” of notable hedge fund managers who were increasing their holdings considerably (or already accumulated large positions). 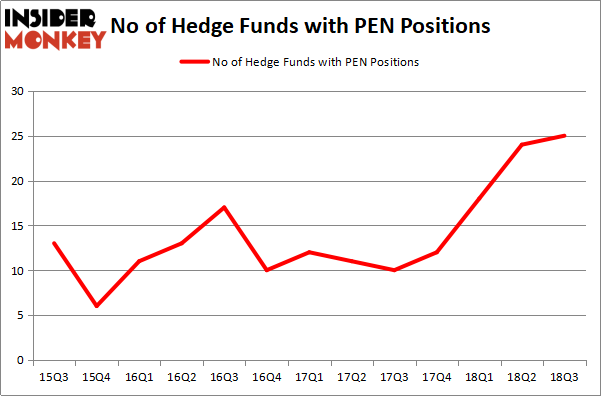 The largest stake in Penumbra Inc (NYSE:PEN) was held by Partner Fund Management, which reported holding $108.6 million worth of stock at the end of September. It was followed by Rock Springs Capital Management with a $35.2 million position. Other investors bullish on the company included Redmile Group, D E Shaw, and Millennium Management.

As aggregate interest increased, specific money managers were leading the bulls’ herd. Marshall Wace LLP, managed by Paul Marshall and Ian Wace, initiated the largest position in Penumbra Inc (NYSE:PEN). Marshall Wace LLP had $8.6 million invested in the company at the end of the quarter. Matthew Hulsizer’s PEAK6 Capital Management also made a $1.1 million investment in the stock during the quarter. The other funds with brand new PEN positions are Brandon Haley’s Holocene Advisors, Mike Vranos’s Ellington, and Anand Parekh’s Alyeska Investment Group.

As you can see these stocks had an average of 14.5 hedge funds with bullish positions and the average amount invested in these stocks was $241 million. That figure was $313 million in PEN’s case. Chemed Corporation (NYSE:CHE) is the most popular stock in this table. On the other hand Ultrapar Participacoes SA (NYSE:UGP) is the least popular one with only 8 bullish hedge fund positions. Compared to these stocks Penumbra Inc (NYSE:PEN) is more popular among hedge funds. Considering that hedge funds are fond of this stock in relation to its market cap peers, it may be a good idea to analyze it in detail and potentially include it in your portfolio.