Searching for the richest painters in the world can prove a rather difficult task, as many of these artists don’t want you to know how much they’re worth, or truly don’t know or care about finding out their own actual wealth; they’re too busy working on their next artistic masterpiece. Moreover, this list will only look at the richest living painters, and as many painters have become famous and wealthy after their death (as their works instantly become collector’s items and greatly increase in value), the field can be rather limited when looking.

The term “starving artist” has become even more applicable to the field in recent times as the age of social media has continued to develop. In part due to the flooding of the market, painting is not looked at as one of the most respected professions that also pay well. However, there are hundreds of ways in which art can now be monetized through these social media platforms, giving painters a true chance for their art to be found while they are still living.

One more factor to take into account when making this list is the amount of money that some of these painters command for their art when they do in fact sell them. Paintings are only listed at a specific price when a buyer inquires about it, at a gallery showing, or at some of the most prestigious art museums such as the MOMA in New York, where some paintings can be available for purchase. By looking at these numbers, one can see the amount of money an artist feels their paintings are worth. While this doesn’t tell us who has more money than another, it does help us validate the claimed wealth of the painters on this list. If someone was supposedly worth millions of dollars but had paintings selling under a hundred, they won’t be on this list.

So as today’s climate allows for painters to get rich before their passing, let’s check out who the richest painters in the world are today. 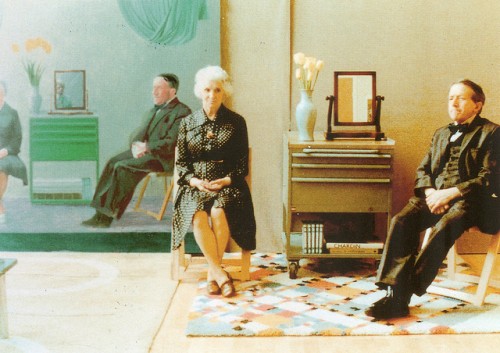 With an estimated worth of $40 million, David Hockney is one of the most influential and fiscally successful British artists in history. He is one painter on this list who has embraced the digital age and has recently showed some of his artwork via iPad. His most recent painting sold was in 2009, when he sold a portrait for $8 million.

A famous Japanese painter is next on our list of the richest painters in the world, continuing on the next page.