Summer’s almost here. For shoppers in much of the northern hemisphere, this means it’s time to load up on swimwear and outdoor activewear. For investors, this means that it could be a favorable time to invest in some apparel retailers that specialize in these fashions. However, this sector has been a particularly volatile one over the past five years, and is a tough one to successfully navigate. In this article, I’ll discuss two potential winners and one to avoid in this sector.

The sun shines again on PacSun

For a few years, Pacific Sunwear of California, Inc. (NASDAQ:PSUN), also known as PacSun, didn’t look like it was going to survive. At the nadir of the financial crisis in 2009, the stock dipped under $1 per share as both its top and bottom lines crumbled. The company operates mall-based beachwear retail stores, and currently operates 643 stores across the United States. 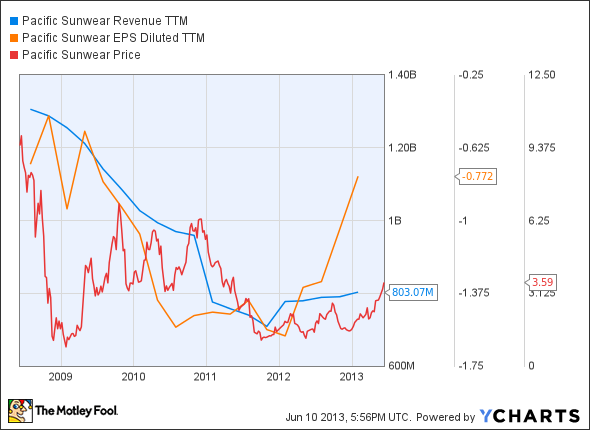 For the first quarter, analysts had fairly low expectations for the company, expecting a loss of $0.19 per share on revenue of $164.22 million. However, Pacific Sunwear of California, Inc. (NASDAQ:PSUN) topped on both profit and revenue, reporting a narrower-than-expected loss of $0.14 per share, up from a loss of $0.20 per share in the prior year quarter. Revenue declined 2.3% to $169.8 million.

Some analysts have speculated that Abercrombie & Fitch Co. (NYSE:ANF)’s Hollister brand was falling out of fashion due to its “California style” fashion, but Pacific Sunwear of California, Inc. (NASDAQ:PSUN)’s numbers prove that there is still a market for the sunny fashions of the Golden State. In addition, Pacific Sunwear of California, Inc. (NASDAQ:PSUN)’s same-store sales growth in the first quarter marks the company’s fifth consecutive quarter of positive same-store sales.

Will Zumiez Inc. (NASDAQ:ZUMZ) zoom up or down?

Meanwhile, Zumiez Inc. (NASDAQ:ZUMZ), which specializes in skater, snowboarder and surfer apparel, reported some lopsided numbers during the first quarter. The company’s earnings came in at $0.13 per share, a 45% decline from the prior year quarter, but topped analyst estimates by a penny. Meanwhile, revenue rose 14% to $148.5 million. The company attributed its steep earnings decline to rising expenses, especially a 26% rise in SG&A (selling, general & administrative) expenses. Zumiez Inc. (NASDAQ:ZUMZ) is in the process of digesting Blue Tomato, a European activewear retailer it acquired last year for $75 million, which weighed down its quarterly earnings by 5 cents per share. 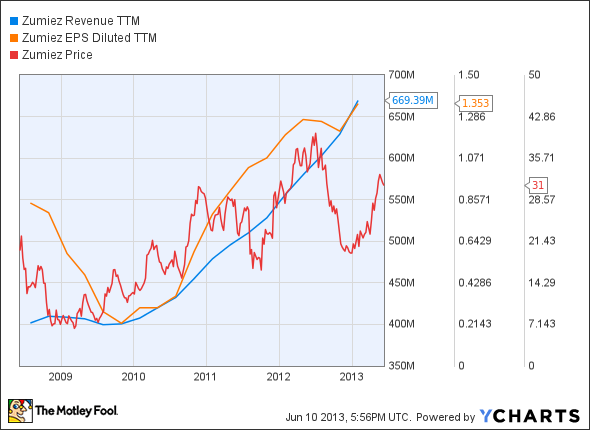 Same-store sales slid 0.7%, a disappointing decline from the 13% growth it reported a year earlier. The company currently operates 505 stores globally, and intends to add 58 new stores during the year.

Zumiez Inc. (NASDAQ:ZUMZ) is a tough call. While its same-store sales decline is tame compared to other teen apparel retailers, it is a big drop from the previous year. Meanwhile, the company seems intent on expanding its footprint into Europe, at a time when most companies are limiting their exposure to the entire region. However, Zumiez Inc. (NASDAQ:ZUMZ) could stabilize later this year if it manages to report lower expenses and positive same-store sales.

Quiksilver, Inc. (NYSE:ZQK) is headed for a bone-crushing wipeout

This brings us to the worst choice of the bunch – Quiksilver, Inc. (NYSE:ZQK). The surf and sun apparel retailer recently wiped out, after reporting weak second quarter earnings. The company reported a net loss of $0.19 per share, or $32.4 million, a steep plunge from the loss of $0.03 per share it reported in the prior year quarter. Revenue decreased 7% to $458.7 million. Analysts had expected Quiksilver, Inc. (NYSE:ZQK) to lose $0.04 per share on revenue of $505.4 million. 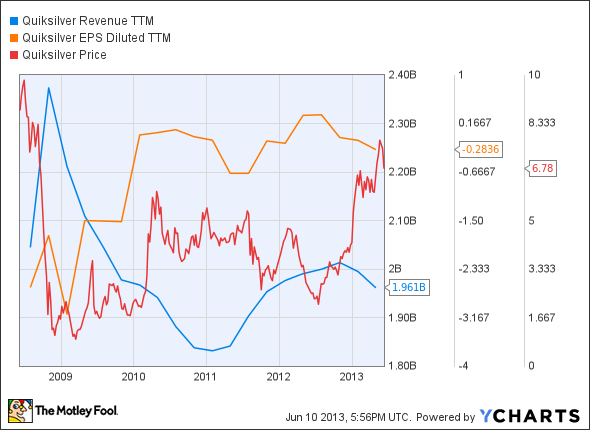