We are still in an overall bull market and many stocks that smart money investors were piling into surged through October 17th. Among them, Facebook and Microsoft ranked among the top 3 picks and these stocks gained 45% and 39% respectively. Hedge funds’ top 3 stock picks returned 34.4% this year and beat the S&P 500 ETFs by 13 percentage points. Investing in index funds guarantees you average returns, not superior returns. We are looking to generate superior returns for our readers. That’s why we believe it isn’t a waste of time to check out hedge fund sentiment before you invest in a stock like OrthoPediatrics Corp. (NASDAQ:KIDS).

OrthoPediatrics Corp. (NASDAQ:KIDS) shares haven’t seen a lot of action during the second quarter. Overall, hedge fund sentiment was unchanged. The stock was in 8 hedge funds’ portfolios at the end of June. The level and the change in hedge fund popularity aren’t the only variables you need to analyze to decipher hedge funds’ perspectives. A stock may witness a boost in popularity but it may still be less popular than similarly priced stocks. That’s why at the end of this article we will examine companies such as Bank of Marin Bancorp (NASDAQ:BMRC), Aurora Mobile Limited (NASDAQ:JG), and Bridge Bancorp, Inc. (NASDAQ:BDGE) to gather more data points. Our calculations also showed that KIDS isn’t among the 30 most popular stocks among hedge funds (see the video below).

In addition to following the biggest hedge funds for investment ideas, we also share stock pitches from conferences, investor letters and other sources  like this one where the fund manager is talking about two under the radar 1000% return potential stocks: first one in internet infrastructure and the second in the heart of advertising market. We use hedge fund buy/sell signals to determine whether to conduct in-depth analysis of these stock ideas which take days. Now we’re going to take a look at the recent hedge fund action surrounding OrthoPediatrics Corp. (NASDAQ:KIDS).

At the end of the second quarter, a total of 8 of the hedge funds tracked by Insider Monkey were long this stock, a change of 0% from the first quarter of 2019. On the other hand, there were a total of 6 hedge funds with a bullish position in KIDS a year ago. With hedgies’ capital changing hands, there exists an “upper tier” of notable hedge fund managers who were boosting their holdings significantly (or already accumulated large positions). 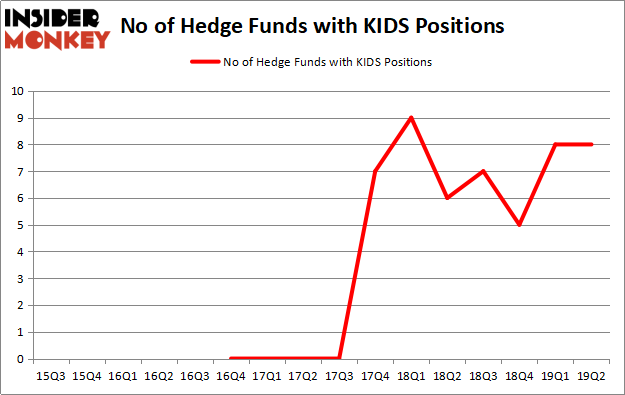 The largest stake in OrthoPediatrics Corp. (NASDAQ:KIDS) was held by Driehaus Capital, which reported holding $17.8 million worth of stock at the end of March. It was followed by Pura Vida Investments with a $5.6 million position. Other investors bullish on the company included Royce & Associates, Millennium Management, and D E Shaw.

Judging by the fact that OrthoPediatrics Corp. (NASDAQ:KIDS) has faced a decline in interest from the aggregate hedge fund industry, logic holds that there was a specific group of funds that elected to cut their positions entirely last quarter. At the top of the heap, Paul Marshall and Ian Wace’s Marshall Wace LLP dumped the biggest position of the “upper crust” of funds watched by Insider Monkey, totaling close to $0.4 million in stock. David Harding’s fund, Winton Capital Management, also dropped its stock, about $0.2 million worth. These bearish behaviors are intriguing to say the least, as total hedge fund interest stayed the same (this is a bearish signal in our experience).

As you can see these stocks had an average of 6 hedge funds with bullish positions and the average amount invested in these stocks was $35 million. That figure was $35 million in KIDS’s case. Bridge Bancorp, Inc. (NASDAQ:BDGE) is the most popular stock in this table. On the other hand Aurora Mobile Limited (NASDAQ:JG) is the least popular one with only 1 bullish hedge fund positions. OrthoPediatrics Corp. (NASDAQ:KIDS) is not the most popular stock in this group but hedge fund interest is still above average. This is a slightly positive signal but we’d rather spend our time researching stocks that hedge funds are piling on. Our calculations showed that top 20 most popular stocks among hedge funds returned 24.4% in 2019 through September 30th and outperformed the S&P 500 ETF (SPY) by 4 percentage points. Unfortunately KIDS wasn’t nearly as popular as these 20 stocks and hedge funds that were betting on KIDS were disappointed as the stock returned -9.6% during the third quarter and underperformed the market. If you are interested in investing in large cap stocks with huge upside potential, you should check out the top 20 most popular stocks among hedge funds as many of these stocks already outperformed the market so far this year.