Ever since August 2011, I’ve been calling out one or two companies every month that I was putting my own retirement money behind. Over that time, my picks have returned about 27%, beating the S&P 500 — not including dividends — by 8 percentage points.

Never, though, have I made an investment that looks as ridiculously silly as this one. By any and all traditional metrics, an investment in Organovo Holdings Inc (NYSEMKT:ONVO) is downright stupid. But read below to see why I’ll be buying shares when Fool trading rules allow.

Have I lost my mind?

There’s no doubt that 3-D printing is a red-hot industry for investors right now. Industry stalwarts 3D Systems Corporation (NYSE:DDD) and Stratasys, Ltd. (NASDAQ:SSYS) have proven that there’s a market for this new technology that can lead to ballooning revenue and profit.

During 2012, while focusing primarily on industrial clients, Stratasys, Ltd. (NASDAQ:SSYS) pulled in $215 million in revenue, while banking a profit of $8.8 million. 3D Systems Corporation (NYSE:DDD), on the other hand, focused intensively on the consumer market, generating $354 million in revenue, and taking home profit of $39 million.

Both companies have also shown remarkable growth over the past three years. 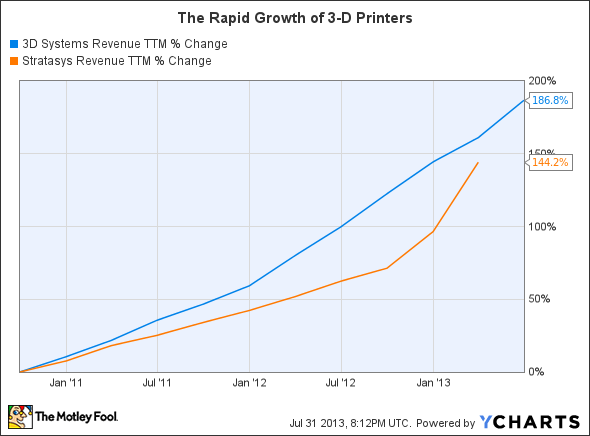 But despite the fact that these two players have shown that 3-D printing can be profitable, there are still bound to be doubters in a company like Organovo Holdings Inc (NYSEMKT:ONVO).

Consider the following: Over the past 12 months, Organovo Holdings Inc (NYSEMKT:ONVO) has generated a grand total of $1.3 million in revenue, of which 20% was from grants; during the same time frame, the company had a net loss of $21.6 million. And yet, Organovo is valued at a whopping $300 million.

For those without calculators handy, that’s about 230 times sales. Crazy.

And yet despite these numbers, I’m going to be putting my own money behind the company. You might still consider me crazy after hearing them, but I have three key reasons for making this move.

First, Organovo Holdings Inc (NYSEMKT:ONVO) has a focused niche that neither 3D Systems Corporation (NYSE:DDD) nor Stratasys, Ltd. (NASDAQ:SSYS) has made a play for: bio-printing. Though it sounds straight out of a science-fiction novel, the company can produce functional human tissue that some think could one day lead to the engineering of actual body parts.

That’s a little far-fetched, though, and I like to focus on what the company can do right now — which is to offer the pharmaceutical industry a powerful new tool — its Novogen MMX Bioprinter.

This is important; the 3D tissue could help drug companies eliminate potential drugs — and save a lot of money — sooner, as their efficacy would become relevant much earlier in the trial process. As these trends show, that would be a welcome development in an industry seeing fewer FDA approvals and higher costs.

This leads me to my second point: This technology is in its infancy, but major players are already starting to test it out. Both Pfizer Inc. (NYSE:PFE) and United Therapeutics Corporation (NASDAQ:UTHR) have taken the bait to test Organovo’s tissue.

The company’s agreement with Pfizer Inc. (NYSE:PFE) was completed in late 2012, and Organovo is waiting to hear back from Pfizer as to whether the company wishes to continue using Organovo’s product. The agreement with United Therapeutics Corporation (NASDAQ:UTHR), on the other hand, is currently still under way, with the company using Organovo’s technology to help research pulmonary hypertension treatments.