Old National Bancorp (NYSE:ONB) has seen an increase in support from the world’s most elite money managers recently. Our calculations also showed that ONB isn’t among the 30 most popular stocks among hedge funds (view the video below).

At the moment there are numerous signals market participants employ to appraise publicly traded companies. Two of the most underrated signals are hedge fund and insider trading indicators. Our researchers have shown that, historically, those who follow the best picks of the best investment managers can outperform their index-focused peers by a healthy amount (see the details here).

What does smart money think about Old National Bancorp (NYSE:ONB)?

Heading into the third quarter of 2019, a total of 10 of the hedge funds tracked by Insider Monkey were long this stock, a change of 11% from one quarter earlier. The graph below displays the number of hedge funds with bullish position in ONB over the last 16 quarters. With hedgies’ sentiment swirling, there exists a few notable hedge fund managers who were increasing their holdings significantly (or already accumulated large positions). 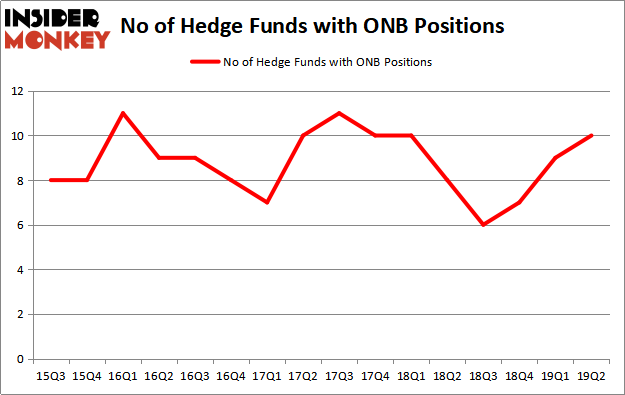 Among these funds, PEAK6 Capital Management held the most valuable stake in Old National Bancorp (NYSE:ONB), which was worth $20 million at the end of the second quarter. On the second spot was Citadel Investment Group which amassed $17.1 million worth of shares. Moreover, Basswood Capital, Citadel Investment Group, and Private Capital Management were also bullish on Old National Bancorp (NYSE:ONB), allocating a large percentage of their portfolios to this stock.

As aggregate interest increased, key hedge funds were breaking ground themselves. Citadel Investment Group, managed by Ken Griffin, initiated the largest call position in Old National Bancorp (NYSE:ONB). Citadel Investment Group had $17.1 million invested in the company at the end of the quarter. Noam Gottesman’s GLG Partners also made a $1.4 million investment in the stock during the quarter. The other funds with brand new ONB positions are Dmitry Balyasny’s Balyasny Asset Management and Steve Cohen’s Point72 Asset Management.

As you can see these stocks had an average of 24.5 hedge funds with bullish positions and the average amount invested in these stocks was $487 million. That figure was $20 million in ONB’s case. Hilton Grand Vacations Inc. (NYSE:HGV) is the most popular stock in this table. On the other hand Cathay General Bancorp (NASDAQ:CATY) is the least popular one with only 12 bullish hedge fund positions. Compared to these stocks Old National Bancorp (NYSE:ONB) is even less popular than CATY. Our calculations showed that top 20 most popular stocks among hedge funds returned 24.4% in 2019 through September 30th and outperformed the S&P 500 ETF (SPY) by 4 percentage points. A small number of hedge funds were also right about betting on ONB, though not to the same extent, as the stock returned 4.5% during the third quarter and outperformed the market as well.