Nokia Corporation (ADR) (NOK) Continues to Rise From the Ashes

Rising from the ashes

Nokia’s decline has been well documented by financial media. The company, once the largest handset manufacturer in the world, had its world turned upside down by the release of Apple Inc. (NASDAQ:AAPL)’s seminal iPhone in 2007 and the subsequent deluge of Google Inc (NASDAQ:GOOG) Android handsets that followed in 2008.

The company’s Finnish management was too proud to admit defeat and halt support for its aging Symbian operating system, so it continued to release unpopular, dated products, bleeding market share as its top and bottom line growth crumbled. Between the release of the iPhone in June 2007 and CEO Olli-Pekka Kallsvuo’s departure in September 2010, shares of Nokia lost 65% of their value as earnings per share plummeted 82%. On the following chart, the impact of Apple Inc. (NASDAQ:AAPL) and Google Inc (NASDAQ:GOOG) devices on its growth its clearly marked by a precipitous decline starting in early 2008. 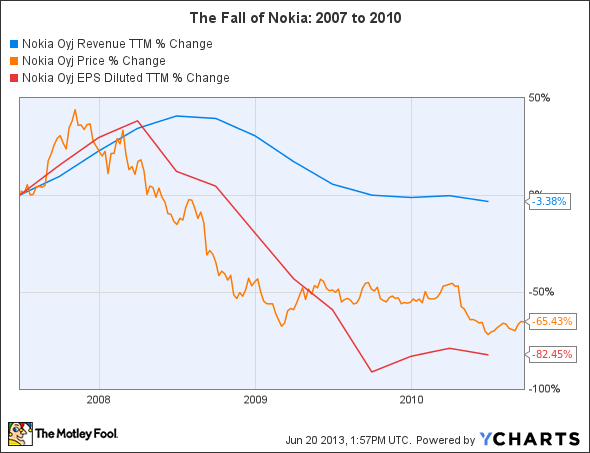 Yet appointing Stephen Elop, a Canadian executive from Microsoft Corporation(NASDAQ:MSFT), as the first foreign CEO of Nokia was a bold and wise move. Although Elop’s appointment and subsequent partnership with his former employer, Microsoft, was harshly criticized by several Nokia executives who departed the company in protest, hiring Elop was the right play at the right time.

Although Nokia’s shares continued to lose value, plunging another 61% after his appointment, the bleeding appears to have stopped after fairly positive reviews and sales of its flagship Windows Phone 8 handset, the Lumia 920. Its new variants, which include the aluminum-cased 935 and the slimmer 928, have also been met with favorable reviews.