Russell 2000 ETF (IWM) lagged the larger S&P 500 ETF (SPY) by more than 10 percentage points since the end of the third quarter of 2018 as investors first worried over the possible ramifications of rising interest rates and the escalation of the trade war with China. The hedge funds and institutional investors we track typically invest more in smaller-cap stocks than an average investor (i.e. only about 60% S&P 500 constituents were among the 500 most popular stocks among hedge funds), and we have seen data that shows those funds paring back their overall exposure. Those funds cutting positions in small-caps is one reason why volatility has increased. In the following paragraphs, we take a closer look at what hedge funds and prominent investors think of NextEra Energy, Inc. (NYSE:NEE) and see how the stock is affected by the recent hedge fund activity.

Is NextEra Energy, Inc. (NYSE:NEE) a cheap investment now? Money managers are turning bullish. The number of long hedge fund positions inched up by 1 recently. Our calculations also showed that NEE isn’t among the 30 most popular stocks among hedge funds.

Unlike the largest US hedge funds that are convinced Dow will soar past 40,000 or the world’s most bearish hedge fund that’s more convinced than ever that a crash is coming, our long-short investment strategy doesn’t rely on bull or bear markets to deliver double digit returns. We only rely on the best performing hedge funds‘ buy/sell signals. Let’s take a gander at the fresh hedge fund action surrounding NextEra Energy, Inc. (NYSE:NEE).

At Q3’s end, a total of 41 of the hedge funds tracked by Insider Monkey were bullish on this stock, a change of 3% from one quarter earlier. Below, you can check out the change in hedge fund sentiment towards NEE over the last 17 quarters. With the smart money’s sentiment swirling, there exists an “upper tier” of key hedge fund managers who were adding to their stakes substantially (or already accumulated large positions). 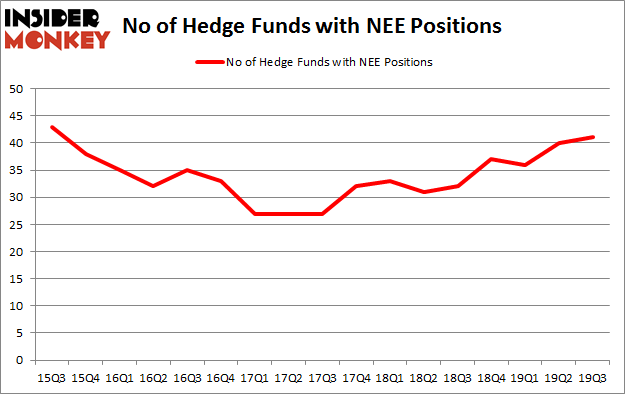 According to Insider Monkey’s hedge fund database, Rajiv Jain’s GQG Partners has the biggest position in NextEra Energy, Inc. (NYSE:NEE), worth close to $204.9 million, accounting for 2.1% of its total 13F portfolio. Sitting at the No. 2 spot is Citadel Investment Group, led by Ken Griffin, holding a $157.3 million position; the fund has 0.1% of its 13F portfolio invested in the stock. Other professional money managers that hold long positions include Cliff Asness’s AQR Capital Management, Phill Gross and Robert Atchinson’s Adage Capital Management and Daniel S. Och (founder)’s Sculptor Capital. In terms of the portfolio weights assigned to each position Shelter Harbor Advisors allocated the biggest weight to NextEra Energy, Inc. (NYSE:NEE), around 11.77% of its portfolio. Ecofin Ltd is also relatively very bullish on the stock, dishing out 11.15 percent of its 13F equity portfolio to NEE.

As you can see these stocks had an average of 45.5 hedge funds with bullish positions and the average amount invested in these stocks was $2426 million. That figure was $1505 million in NEE’s case. AbbVie Inc (NYSE:ABBV) is the most popular stock in this table. On the other hand BHP Group (NYSE:BBL) is the least popular one with only 21 bullish hedge fund positions. NextEra Energy, Inc. (NYSE:NEE) is not the least popular stock in this group but hedge fund interest is still below average. This is a slightly negative signal and we’d rather spend our time researching stocks that hedge funds are piling on. Our calculations showed that top 20 most popular stocks among hedge funds returned 34.7% in 2019 through November 22nd and outperformed the S&P 500 ETF (SPY) by 8.5 percentage points. Unfortunately NEE wasn’t nearly as popular as these 20 stocks (hedge fund sentiment was quite bearish); NEE investors were disappointed as the stock returned 0.2% during the fourth quarter (through 11/22) and underperformed the market. If you are interested in investing in large cap stocks with huge upside potential, you should check out the top 20 most popular stocks among hedge funds as 70 percent of these stocks already outperformed the market in Q4.