In its Q1 2019 Market Commentary, Horizon Kinetics wrote Netflix, Inc. (NASDAQ:NFLX) presents a similar investment risk as Amazon (AMZN). The fund’s full comment on Amazon you can find here, while in this article we bring you its complete thesis on Netflix (NFLX) from the report.

“Netflix poses a similar challenge. It earned $2.68 per share in 2018. The shares trade at 134.7x this figure. It should also be added that Netflix produces negative cash flow despite formally reporting profitability.
The analyst consensus is that Netflix will earn $9.31 in 2021, which would require profit to more than triple. One way to triple profits would be to triple subscribers. In the past four years, Netflix has increased subscribers from 54.476 million to 139.259 million. That’s an annual growth rate of 26.5%. At this rate, Netflix would have 281.537 million subscribers at the end of 2021. If one were to accept that the incremental subscribers enjoy the existing content enjoyed by the existing subscribers, there would be a self-evident economy of scale: there would be more subscriber revenue without more subscriber cost, and Netflix might actually achieve its earnings objective.

However, the historical experience has been that attracting marginal or new subscribers requires massive spending on original content. This is evident in the accompanying table. In reading the table, you must be aware that the balance sheet value of the company’s content is amortized constantly, so the stated figure is actually going down unless at least that amount of new content assets are added. In 2014, the content assets were about $4.9 billion. In 2018, it was over $20 billion. During those four years, subscribers increased slightly more than 2.5x, whereas the content assets, even net of amortization, quadrupled; actual spending increases had to be far greater than that. In the meanwhile, all of the major entertainment companies are building Netflix-like platforms to challenge Netflix with new and original content. In effect, the earnings estimate presumes that the Netflix original content will be more appealing to the worldwide subscriber base than the original content of the other platforms.

However, if we were to simply presume that Netflix does in fact earn $9.31 per share, exactly as predicted by the analysts, then the shares, if still at their current price, would trade at a P/E ratio of 38.8x in 2021. If the company earns that amount and if one wishes to make a 10% rate of return between now and 2021, the stock would need to trade for $480.50. This would be a P/E ratio of 51.6x. The Netflix shares seem to require a great deal of risk merely to earn 10% before taxes. That’s not to say it won’t happen, but why take that level of risk in order to try for a 10% return?”

At Q4’s end, a total of 83 of the hedge funds tracked by Insider Monkey were bullish on this stock, a change of -1% from one quarter earlier. Below, you can check out the change in hedge fund sentiment towards NFLX over the last 14 quarters. With the smart money’s positions undergoing their usual ebb and flow, there exists an “upper tier” of key hedge fund managers who were boosting their holdings substantially (or already accumulated large positions). 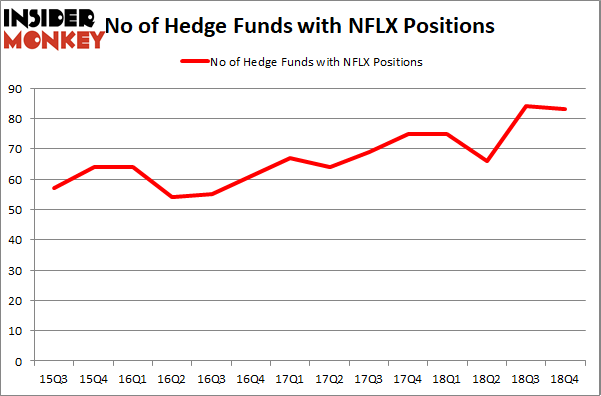