Share Tweet Email
We recently shared Horizon Kinetics Q1 2019 Market Commentary, a copy of which you can track down here. In the report, the fund shared its views on some of the companies from its equity portfolio. Among these, Amazon.com, Inc. (NASDAQ:AMZN) found its place as well. Here is the full comment on Amazon from the report:

“Assuming that the consensus earnings estimate by research analysts who follow Amazon proves to be accurate, then in order to profit from holding Amazon until the year 2022, the shares must trade at a P/E ratio greater than 21.45x in that year. To clarify, if the estimate of $82.26 per share is actually achieved in 2022, and if the shares trade at 21.45x that number, then it would be the same price as today.

The only way Amazon is going to appreciate, accepting the earnings estimate, would be if the valuation multiple were greater than 21.45x . Of course, the estimate itself assumes that Amazon’s profit will slightly more than triple in 36 months.

No one forecasts that the revenue will triple. Sales expanded at a 29.6% annual rate over the course of the past 36 months, inclusive of the Whole Foods acquisition. That was a double. Most analysts seem to project a 20% revenue growth rate. If accurate, Amazon’s 2018 sales of $232.887 billion will rise to $402.42 billion in 2022. Incorporating that information, then from a purely arithmetical perspective, the only way that Amazon could triple its reported profit would be to expand its profit margins. This is another way of saying that Amazon will increase prices, because it is already a very efficient company in terms of operations.

In any case, Amazon has about 500 million fully diluted shares. If it were to actually earn $82.26 per share in 2022, that would be $41.13 billion of net income, assuming, as this calculation does, that no additional shares are issued to its employees over the course of the next three years. That is probably a bad assumption; the current share count is 5% higher than three years ago.

Nevertheless, by this reasoning, Amazon will produce a net profit margin of 10.22% as opposed to the current margin of 4.34%. Even if the company manages to do all this, the share price would not advance unless the shares trade, in 2022, at a P/E ratio above 21.45x.

If, instead, the P/E ratio is 25x, and Amazon achieves all of this margin expansion and all this profit growth, the return to shareholders would be 5.23% per annum. Again, this makes the unlikely assumption that the company issues no more shares. It does seem like a great deal of risk for a rather unexciting rate of return.”

Amazon the world’s biggest e-commerce and cloud computing platform as per its revenue and market capitalization, which currently stands at around $935.37 billion. The company is trading at a price-to-earnings ratio of 79.31. Year-to-date, its stock gained 23.43% having a closing price on May 9th of $1899.87.

At Q4’s end, a total of 168 of the hedge funds tracked by Insider Monkey were long this stock, a change of 12% from the previous quarter. By comparison, 130 hedge funds held shares or bullish call options in AMZN a year ago. With the smart money’s positions undergoing their usual ebb and flow, there exists an “upper tier” of notable hedge fund managers who were adding to their stakes substantially (or already accumulated large positions).

The largest stake in Amazon.com, Inc. (NASDAQ:AMZN) was held by Citadel Investment Group, which reported holding $5393.1 million worth of stock at the end of September. It was followed by Fisher Asset Management with a $2434.4 million position. Other investors bullish on the company included Eagle Capital Management, Tiger Global Management LLC, and Lone Pine Capital. 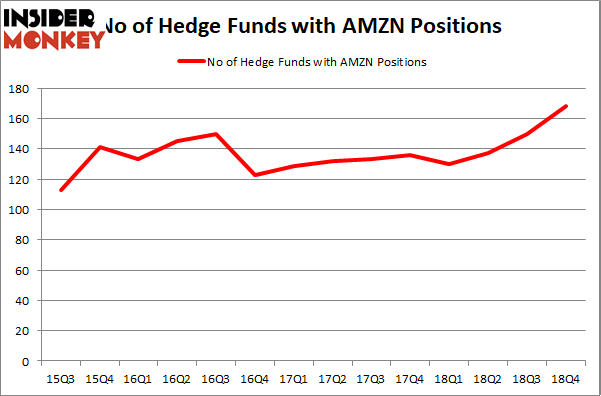