Colleges claim to be the melting pot of ideas, debates, and a peak into what future society will look like. If this concept is true, then Netflix, Inc. (NASDAQ:NFLX)‘s future looks fantastic! Before I graduated in December 2012, I took a stroll down the dorm that I called home during my freshmen year. The building was updated: new carpet, paint, furniture–but one thing that caught my eye was how many students were streaming Netflix movies in their rooms. Even though cable is “free” for the each student living in the dorms, I noticed the typical dorm student was watching a TV series or Friday night movie with friends via Netflix. Even the people I know off campus, unless they obtained a cable “promotional package” for a year, only had a Netflix or Netflix/Hulu combination for their TV consumption.

The Upside of Netflix, Inc. (NASDAQ:NFLX)…

Enough about reminiscing about college–what about Netflix itself? Netflix is spending the cash to obtain content, such as its deal with Warner Bros that will allow Netflix to add programs such as Revolution and The Following.There are rumors of Netflix trying to court Sony Entertainment movies, and the December The Walt Disney Company (NYSE:DIS) deal has been a major hit with the ladies on campus…sorry, enough college talk.

Simply put, Netflix is investing into content and this strategy is the trump card it’ll use to beat the competition. On Feb. 1, Netflix released their first in-house TV series House of Cards. The series marks a first for online streaming services, but it also flips the conventional “wait a week for the next episode” as subscribers have the entire series available right from the start.

When it comes to the competition, Netflix is thrashing them with the content deals that Netflix has secured lately. Here is a snippet, and accompanying graphic, that were taken from Netflix’s latest 8-K: 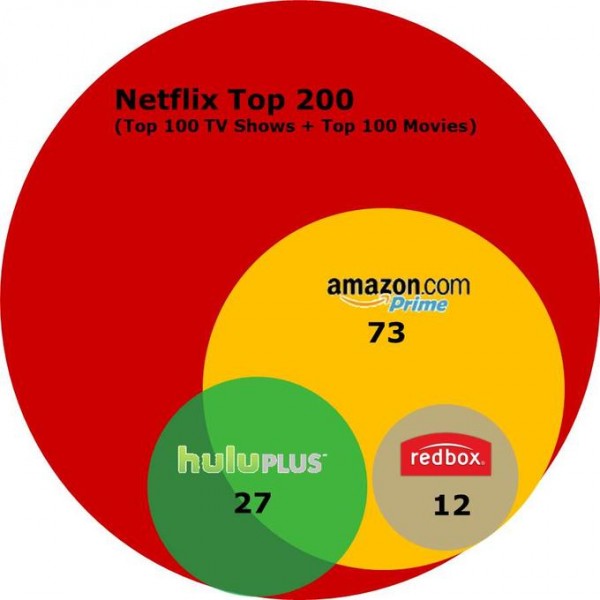 To the degree they have some of the same content as Netflix, [Amazon, Hulu Plus, and Redbox] are potentially a substitute for Netflix. To examine this, we looked at the top 200 titles on Netflix: our 100 most popular movies and our 100 most popular TV shows in Q4. Of these 200, 113 are not on Amazon (NASDAQ:AMZN) Prime, Hulu Plus or Redbox Instant. Of the 87 that are available on at least one of these services, Hulu Plus offers 27 of the 200; Amazon Prime 73 of the 200; and Redbox Instant 12 of the 200, with significant overlap in TV between Hulu Plus and Amazon Prime, and in movies between Amazon Prime and Redbox Instant. In other words, when it comes to the most popular content with members on Netflix, none of these services are good substitutes to Netflix.

In short: Netflix has the content, is securing more content, and now is in the business of producing its own content (ala: House of Cards). Things are looking up!