Natural gas is one of the cleanest, safest, and most useful of all energy sources. Unlike oil and coal, natural gas is clean burning and emits lower levels of harmful byproducts into the air. Natural gas could have a strong outlook because of its environmentally friendly nature. Large quantities of shale gas, three-dimensional seismology, horizontal drilling and innumerable computer-related breakthroughs have aided the United States in increasing the percent of natural gas consumed that is domestically produced. According to the EIA, of the natural gas consumed in the United States in 2011, about 94% was produced domestically. This is a drastic improvement from ten years ago when only 84% of natural gas consumed was produced domestically. Here’s a list of three ETFs that can capitalize on this boost.

A report prepared for the Natural Gas Foundation states that while the price of natural gas per unit energy has historically been lower than liquid fossil fuels, this price differential must be large enough to overcome barriers to substantial market penetration by natural gas vehicles (NGV). These barriers include the capital expenses associated with infrastructure development for storage of natural gas in compressed or liquefied form, and the cost premium for lower-production vehicles with more expensive fuel tanks. Additional barriers have included the lagging optimization and availability of NGV. Although these latter two obstacles have been reduced in recent years, lingering negative perceptions persist as a result of early-adopters’ experience with less-developed engine and vehicle technologies.

Billionaire energy investor T Boone Pickens, can attest to the fact that natural gas is currently much cheaper than gasoline (Click here to see Pickens’s latest prediction). Instead of fueling up for $4 a gallon, “Pickens fuel” costs about $1 a gallon. Unfortunately, it will not run a conventional car or truck engine, because Pickens’s Honda Civic GX runs on natural gas. Honda Motor Co. (NYSE:HMC) makes a few Civics with natural gas engines, and Chrysler and General Motors Company (NYSE:GM) plan to make some natural gas pick-up trucks. The graph below gives credence to this price differential. 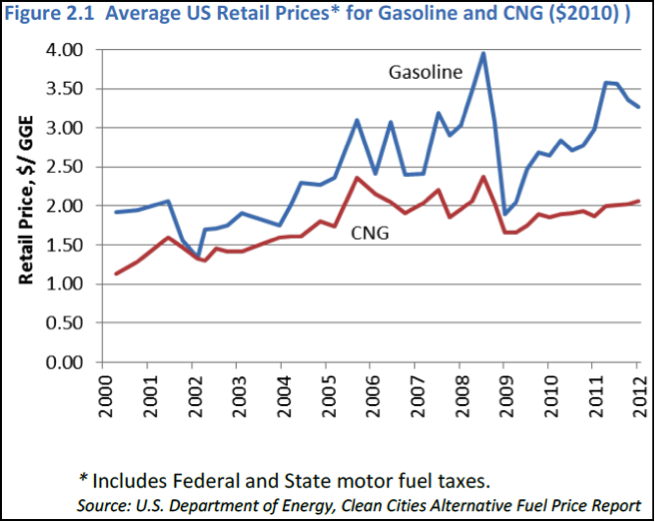 As part of a new promotional effort, Honda is offering a $3,000 debit card good at Clean Energy natural gas filling stations with the purchase of a 2012 model year Civic Natural Gas vehicle. There are 40 Clean Energy filling stations in Southern California and about 160 nationwide. To fuel up, natural gas car owners pay roughly $2 a gallon, slightly more than Pickens’s home fueling station, but about half the price of gasoline.  The natural gas version Civic starts at about $27,000, about $5,600 more than the gasoline Civic.

General Motors will offer a bi-fuel version of their 2013 Chevrolet Silverado and GMC Sierra pickup trucks that will run on either gasoline or natural gas. After speaking with Chevy Volt owners, GM realized that their customers worry about running out of fuel. By making bi-fuel engines, GM is relieving buyers of the need to stay within range of a local natural-gas fueling station. GM has not released the fuel economy or the prices of either of their 2013 bi-fuel trucks, but there’s a roadblock in the way of automakers producing large volumes of natural gas engines in the passenger car segment.  Automakers know that until consumers are sure they can find a natural gas fueling station as readily available as a conventional one, the majority will stick to what they know best.

Companies are beginning to take on the risks associated with developing a natural gas transportation market with hopes of reaping in large returns. GP Strategies Corporation (NYSE:GPX), a global performance improvement provider, has branched out of their traditional business and started to build natural gas filling stations. Doug Sharp, president of GP Strategies, believes “the first customers who convert to natural gas vehicles will be the return-to-base operations, and the second will be the long-haul truckers.”

Return-to-base customers are like buses, which have designated daily routes and return to their base at designated times. Mike Mackey, vice president of GP’s Alternative Fuel’s Group, spoke on the long-haul trucker market stating “long-haulers typically travel 80,000 miles a year, burning 14,000 gallons of fuel, generally diesel fuel. At current fuel prices, a trucker would save $21,000 a year buying natural gas rather than diesel. Clean Energy Fuels Corp. (NASDAQ:CLNE) has natural gas fueling stations for vehicles in the United States and Canada, and is America’s largest provider of natural gas for transportation. Co-founded by T. Boone Pickens, the company operates about 150 liquefied natural gas (LNG) stations, and is building across the country. 70 stations are expected to be built in 2012, with each station costing roughly $1.5 million.

Mike Britt, director of vehicle engineering at UPS stated “Investment in a fuel-efficient technology that helps reduce our carbon footprint and reduce our dependence on petroleum remains a key component of UPS’s transport strategy.” Natural gas vehicles work great for return-to-base vehicle users like UPS. By having routes down to a science, UPS can confidently have delivery trucks fuel up at their base before running the daily routes, and then return upon completion and fuel up the next day. The premium paid for the NGV’s is quickly paid off by the savings on fuel,  and an image boost doesn’t hurt.

For now, there are only about 1,000 natural gas filling stations in the U.S., compared with more than 160,000 gasoline and diesel stations. Stations are most prevalent in California, Oklahoma, New York, and Utah. A report for the Natural Gas Foundation titled Natural Gas as a Transportation Fuel stated:

“As NGVs become mainstream in the initially targeted markets, the costs of NGV adoption are expected to decrease allowing more favorable economics for additional sectors to enter the NGV market, ultimately including personal passenger cars and home refueling. The rate of NGV adoption, however, may be increased with programs designed to reduce the initial barriers to market entry: vehicle premium costs, refueling station availability, and consumer confidence in NGVs. Market acceleration is necessary in instances when supply infrastructure and fueling demand need to be simultaneously developed to mitigate the risk to ratepayers or shareholders of unused assets.”

While it remains to be seen exactly when this gap with start to converge, it appears that companies like Clean Energy Fuels and GP Strategies would be excellent ways to gain exposure to the potential of this industry, and automakers Honda, GM, and Chrysler can capitalize quite significantly with their natural gas-enabled vehicles. For a complete look at T. Boone Pickens’s 13F portfolio, continue reading here.

Is Ford a Good Stock to Buy?