WTI crude oil closed yesterday below $90 a barrel for the first time since August 2, 2012.   Brent crude oil is also near its one month low, trading around $110.  In a CNBC interview with the hedge fund manager for BP Capital, T.Boone Pickens, the energy mogul stated that the low prices in oil are related to the slowdown in China’s economy.  Pickens, believes that Brent crude oil will be at $115 by the end of the year, and natural gas should reach $4 by the end of the year.

Unlike many hedge fund managers, Pickens is 100% focused in his core competency, energy markets.  The energy mogul also made three other bold statements about oil and gas.  Pickens believed that (1) the U.S. has enough natural resources to one day stop importing OPEC crude oil, (2) there are 30 states producing oil and gas, the highest we’ve ever had, and (3) natural gas is the “alternative energy” for transportation.

Elaborating on his first point about no longer importing OPEC crude oil, in the CNBC interview, Pickens was asked how long it would take for the U.S. to be less dependent on OPEC.  Pickens broke down his methodology in layman’s terms stating of the 20 million barrels of oil we use a day, 11 million is imported.  Of that 11 million imported, 4.5 million comes from OPEC, and Pickens believes we could easily cover that using oil found here in the U.S.

Anyone with interest in the energy sector will tell you that the presidential election this year could shape the direction the U.S. will take on the energy front.  Pickens pointed out in his CNBC interview that although Obama talks about energy a little bit, he has not shared a comprehensive strategy. Pickens believes Romney will win the election, and one major reason for that is his energy plan. Pickens believes that Romney has a realistic energy plan which encompasses bringing together Mexico, Canada, and the United States, to make North America energy independent.

Seeing natural gas as the “alternative energy” for transportation seems like a pretty far-out there prediction at a glance.  Pickens doesn’t believe the idea is unrealistic, though, as he pointed out that there are 13 million vehicles in the world on natural gas, and only 130,000 of them in the United States.  Doug Sharp, president of GP Strategies, has an interesting view on natural gas being implemented in transportation.  He predicts that “the first customers who convert to natural gas vehicles will be the return-to-base operators, and the second will be the long-haul truckers.”  Return-to-base operators will fill their tanks up at their base location every morning, and have scheduled runs every day where they return back to their base after work (ex: buses and delivery services).  The technology is available to transform the automotive industry from oil to gas, and gas engine automobiles are slowly becoming a larger focus on the energy scene. 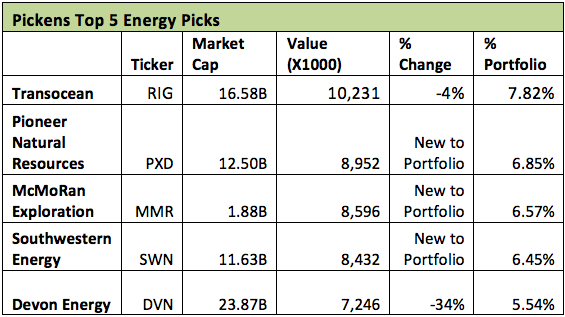 The table above shows Pickens top five energy picks.  Transocean LTD (NYSE:RIG), the provider of offshore contract drilling services for oil and gas wells, is Pickens top holding accounting for 7.82% of his portfolio.  RIG is trading at 1.73 times sales and has an EV/EBITDA of 8.14.  The offshore drilling service provider has an ROA of 3.04% and ROE of -35.09%.

Moving down to Pickens’s third largest holding, Mcmoran Exploration Co (NYSE:MMR) is an oil and natural gas exploration company which conducts their business in shallow water in the golf coast, and accounts for 6.57% of his portfolio.  MMR is trading at 4.08 times sales and has an EV/EBITDA of 17.25.  This small-cap oil and natural gas company has an ROA of -1.61% and an ROE of -0.54%.

Southwestern Energy Company (NYSE:SWN) is a natural gas and oil exploration company with a focus in the U.S., the company represents 6.45% of his holdings and is Pickens fourth largest holding.  SWN is trading at 4.19 times their sales and has an EV/EBITDA of 7.93.  The company has an ROA of 7.84% and an ROE of -1.37%.

Rounding out Pickens top five holdings is Devon Energy Corporation (NYSE:DVN), an oil, natural gas, and liquefied natural gas company, which accounts for 5.54% of Pickens holdings.  DVN is trading at 10.23 times their earnings and has an EV/EBITDA of 4.13.  The company has an ROA of 6.19% and an ROE of 11.23% (click here to see the 10 most popular energy stocks among hedge funds).

Pickens has been spot on with his recent forecasts of the energy markets. His history of success in this industry makes him a credible and insightful source for making broad-based, directional bets, which can be seen when looking at his top five holdings. For the most part, the hedge fund manager has a focus on companies with exposure to both oil and gas, and he seems to have shied away from coal companies. If Pickens’s forecasts about oil reaching $115 and gas reaching $4 turn out correct by the end of 2012, it may be worth taking a look at the stocks mentioned here. For a complete look at T. Boone Pickens’s 13F portfolio, continue reading here.

Why is ‘Mini’ Berkshire Hathaway Selling Out of This Manufacturing Company...
Monthly Newsletter Strategy
Download a free copy of our newsletter and see the details inside!
Hedge Fund Resource Center
Billionaire Hedge Funds