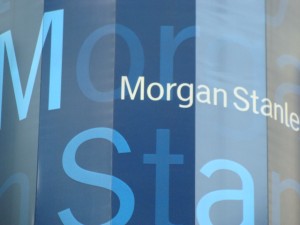 Morgan Stanley (NYSE:MS) recently reported a stronger quarter, primarily driven by growth in asset management and wealth management revenue. The growth in revenue was primarily driven by the rallying stock market and rotations from commodities and bonds into stocks. The demand for stocks is likely to improve due to the better yields stocks tend to have when compared to bonds.

Morgan Stanley (NYSE:MS) grew revenue 30% in its institutional securities. The company also experienced 21% growth in revenue from asset management. The consolidated net revenue grew 18% year-over-year. The growth in asset management was driven by the bull market in equities.

Morgan Stanley (NYSE:MS)’s costs declined over the same period as it cut its head count in order to improve efficiencies. The total non-interest expenses declined 3% year-over-year, which contributed to the sudden surge in earnings.

The company’s bottom line grew from a loss of $119 million in the previous fiscal year to a profit of $977 million for the current fiscal year, which is really impressive. The growth was a whopping 900% year-over-year. More importantly, the company was able to grow its earnings in a quarter that is seasonally slow.

The broader stock market experienced a rather strong rally for the first quarter, and this boosted Morgan Stanley (NYSE:MS)’s trading income. The company’s asset management division was able to benefit from equity inflows. The equity inflows resulted in an increase in the assets under management. Assets under management increased to $621 billion, with the total clients assets increasing 6% to $1.8 trillion.

Larry D. Fink of BlackRock, Inc. (NYSE:BLK) believes that investors are rotating into stocks, but are looking to invest capital into low-beta dividend yielding equities. Asset managers, more particularly hedge funds, have been chasing higher beta stocks. In general, the demand for equities led to BlackRock, Inc. (NYSE:BLK) being able to report earnings growth of 11%. The growth in earnings is likely to be sustainable as the company’s guidance (outlook on earnings for the rest of the year) remained stable.

Performance driven fees were the key behind Goldman’s strong asset management growth. Hedge funds tend to charge a certain percentage fee for growth (around 20% for every percentage above the initial buy-in price).