A market-moving update, George Soros’s Soros Fund Management bought 17,386,361 shares of J.C. Penney Company, Inc. (NYSE:JCP) in a 13G filing with the Securities and Exchange Commission, via the agency’s Edgar system. Altogether, the position in J.C. Penney is worth $282.7 million.

This is a new position for Soros, and if we take the values of the hedge fund manager’s entire 13F portfolio reported heading into 2013, J.C. Penney now represents a top-three equity holding for Soros and his team. In investment circles, 13Gs reveal the intentions of passive investors. Aside from titans like George Soros, in most cases, these hedgies don’t have the same level of chatter surrounding them as their activist peers, but passive managers must be watched in a similar light.

In other words, it’s extremely important for retail investors to internalize George Soros’s new play into J.C. Penney Company, Inc. (NYSE:JCP), because it can benefit those who watch hedge fund sentiment (learn the details here).

Why should investors pay attention?

Though the media, analysts and the blogosphere at large reports on a multitude of equity-based metrics, there’s one that stands out: the sentiment of the world’s best money managers. At Insider Monkey, our research has shown that piggybackers who follow specific hedge fund activity can beat the market by eighteen percentage points a year.

Focusing in on J.C. Penney Company, Inc. (NYSE:JCP), we can see that 27 other hedge funds were bullish on JCP stock at the end of last quarter. In particular, Bill Ackman’s Pershing Square, Whitney Tilson’s T2 Partners, and Murray Stahl’s Horizon Asset Management, were long in J.C. Penney, some of the best peers anyone can keep.

Moreover, we should also mention a few positions in Soros’s last-reported 13F portfolio, in addition to the new stake in J.C. Penney Company, Inc. (NYSE:JCP). As follows, they include Citigroup Inc (NYSE:C), American International Group Inc (NYSE:AIG), and Pioneer Natural Resources (NYSE:PXD), which were valued at $321 million, $312 million, and $222 million at the end of the fourth quarter.

Adjusting for market value is really a moot point–we do not know if Soros has trimmed or added to the aforementioned positions in AIG, Citigroup or Pioneer, but it’s to be expected that when the hedgie reports his Q1 13F next month, J.C. Penney will sit in his top five long equity holdings.

While Soros isn’t viewed as a traditional value investor, many of his biggest bets in the stock market are tied to companies that are trading below their perceived intrinsic value, and J.C. Penney is no different. Shares of the retailer have been in free-fall over the last three months, losing more than 21% in value during this relatively short time.

While we’ve seen past supporters–like Bill Ackman–speak out against ex-CEO Ron Johnson and his failed efforts to transform how consumers viewed their shopping experience. Or at least he couldn’t do it as quickly as investors wanted him to. Regardless, George Soros’s move into J.C. Penney Company, Inc. (NYSE:JCP) must be viewed first and foremost as a vote of confidence for the retailer’s new Chief Executive, Mike Ullman.

Logically speaking, if Ullman is able to reinstate some of his company’s past discount and coupon programs with the same success of yesteryear, then JCP stock should deserve a valuation that’s more in line with how it’s historically traded. At the moment, shares of J.C. Penney trade at a mere 1.1 times their book value, which is 15% below five-year averages. Sales valuations are also below historical norms, and J.C. Penney bulls who are now moving into the stock can take the added bonus of being behind Soros, who is likely to bring more of the smart money’s best and brightest with him.

We saw a similar phenomenon with AIG last year. Soros purchased shares of the post-bailout insurer in the third quarter of 2012, only to see 21 other mega-hedge funds (of the 450+ we track) buy the stock one quarter later, in Q4. AIG went on to displace Apple Inc. (NASDAQ:AAPL) as the hedge fund industry’s favorite stock, and there’s potential for a massive influx of capital into J.C. Penney as well. 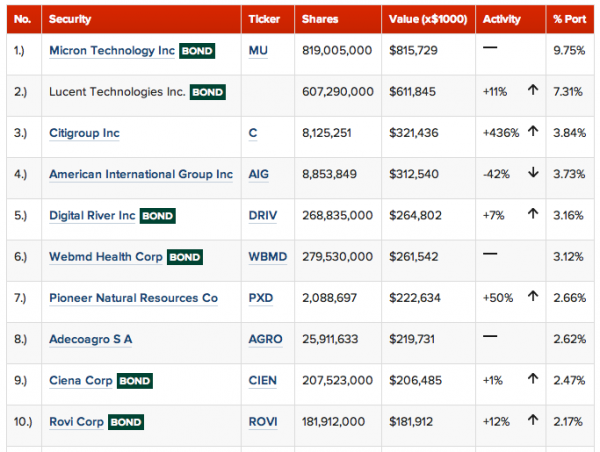 While we’re still waiting for the latest data, we expect Soros’s J.C. Penney Company, Inc. (NYSE:JCP) position to slot right in between AIG and Pioneer Natural Resources on the long-only equity side.

Check out J.C. Penney’s stock action on the next page:

Related Insider Monkey Articles
Wal-Mart Stores, Inc. (WMT) & The Rest of The Retail Giants: What Do The...

Netflix, Inc. (NFLX): 21 Revelations From This Just-Released, Mammoth Document...Are We at War With North Korea? The 10 Most Terrifying YouTube Videos