We are still in an overall bull market and many stocks that smart money investors were piling into surged through October 17th. Among them, Facebook and Microsoft ranked among the top 3 picks and these stocks gained 45% and 39% respectively. Hedge funds’ top 3 stock picks returned 34.4% this year and beat the S&P 500 ETFs by 13 percentage points. Investing in index funds guarantees you average returns, not superior returns. We are looking to generate superior returns for our readers. That’s why we believe it isn’t a waste of time to check out hedge fund sentiment before you invest in a stock like Mistras Group, Inc. (NYSE:MG).

Hedge fund interest in Mistras Group, Inc. (NYSE:MG) shares was flat at the end of last quarter. This is usually a negative indicator. The level and the change in hedge fund popularity aren’t the only variables you need to analyze to decipher hedge funds’ perspectives. A stock may witness a boost in popularity but it may still be less popular than similarly priced stocks. That’s why at the end of this article we will examine companies such as CNB Financial Corporation (NASDAQ:CCNE), Digital Turbine Inc (NASDAQ:APPS), and Sprague Resources LP (NYSE:SRLP) to gather more data points. Our calculations also showed that MG isn’t among the 30 most popular stocks among hedge funds (see the video below). 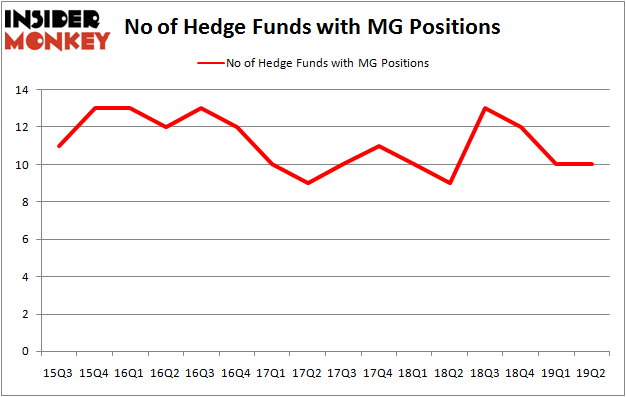 Unlike other investors who track every movement of the 25 largest hedge funds, our long-short investment strategy relies on hedge fund buy/sell signals given by the 100 best performing hedge funds. Let’s take a look at the key hedge fund action surrounding Mistras Group, Inc. (NYSE:MG).

What does smart money think about Mistras Group, Inc. (NYSE:MG)?

At the end of the second quarter, a total of 10 of the hedge funds tracked by Insider Monkey were long this stock, a change of 0% from the previous quarter. The graph below displays the number of hedge funds with bullish position in MG over the last 16 quarters. With hedgies’ sentiment swirling, there exists an “upper tier” of key hedge fund managers who were increasing their holdings meaningfully (or already accumulated large positions).

Seeing as Mistras Group, Inc. (NYSE:MG) has faced a decline in interest from the smart money, we can see that there was a specific group of hedge funds who were dropping their entire stakes in the second quarter. Interestingly, Paul Marshall and Ian Wace’s Marshall Wace LLP cut the largest stake of all the hedgies followed by Insider Monkey, valued at about $0.6 million in call options, and Matthew Hulsizer’s PEAK6 Capital Management was right behind this move, as the fund cut about $0 million worth. These transactions are interesting, as aggregate hedge fund interest stayed the same (this is a bearish signal in our experience).

As you can see these stocks had an average of 5.25 hedge funds with bullish positions and the average amount invested in these stocks was $23 million. That figure was $28 million in MG’s case. Digital Turbine Inc (NASDAQ:APPS) is the most popular stock in this table. On the other hand CNB Financial Corporation (NASDAQ:CCNE) is the least popular one with only 2 bullish hedge fund positions. Mistras Group, Inc. (NYSE:MG) is not the most popular stock in this group but hedge fund interest is still above average. Our calculations showed that top 20 most popular stocks among hedge funds returned 24.4% in 2019 through September 30th and outperformed the S&P 500 ETF (SPY) by 4 percentage points. Hedge funds were also right about betting on MG as the stock returned 14.1% during the third quarter and outperformed the market. Hedge funds were rewarded for their relative bullishness.