Unloved stocks in neglected sectors means potential bargains. One sector that seems to be losing steam is technology. A recent string of earnings reports in the tech sector has left these three companies looking attractively valued.

A disappointing quarter, plagued by a $900 million charge related to Surface RT tablet inventory, sent shares of Microsoft Corporation (NASDAQ:MSFT) down by more than 10%. The charge alone gave a $0.07 haircut to the company’s earnings. Overall earnings came in at $0.59 a share, as opposed to the $0.75-a-share estimate expected by analysts. That’s a huge miss.

Still, there is hope. Declining PC sales are troubling, but the company still managed to increase revenues by roughly 10%– especially where it matters most. Arguably the most important division of the company, the Microsoft Business Division (which includes Office sales), saw a 14% gain in revenues. Office is one of the company’s biggest money makers, and is now at a $1.5 billion annual revenue run rate, according to PC World.

Xbox Live, the gaming and digital media delivery service that charges users a fee to play multiplayer games online, also saw sales jump nearly 20%, which may carry over to the new Xbox One console scheduled to be released later this year.

Microsoft Corporation (NASDAQ:MSFT) is also incredibly strong financially and is one of only a few companies in the entire world with a AAA credit rating: 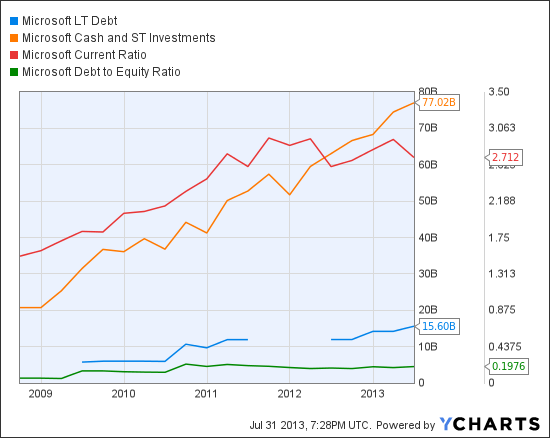 The company is also turning into a dividend growth gem, with a low payout ratio and plenty of free cash flow: 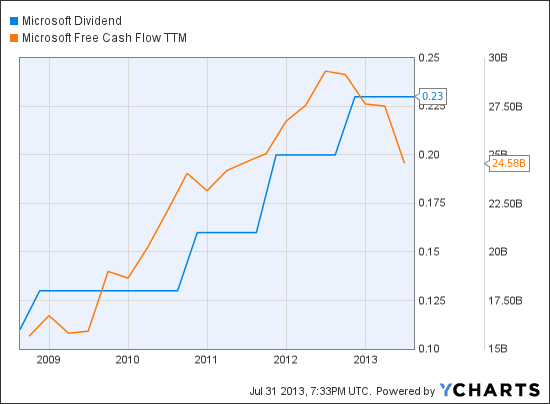 With a payout ratio around 34%, Microsoft Corporation (NASDAQ:MSFT) pays out a dividend yielding a tad under 3%, which can provide an investor with a relatively safe source of income. The income won’t cost you an arm and a leg either, with shares trading at a cheap 12 times earnings, and around 10.5 times forward earnings.

Another technology stock recently causing concern among many investors is International Business Machines Corp. (NYSE:IBM). Shares of IBM are also trading cheaply in relation to earnings, sporting a P/E ratio of about 14 and a forward P/E ratio of around 11. International Business Machines Corp. (NYSE:IBM), like Microsoft Corporation (NASDAQ:MSFT), also dropped over 10% because of missed earnings– two quarters ago.

International Business Machines Corp. (NYSE:IBM)’s most recent quarter, however, was different. The company beat on earnings, even though revenues came in light.

The balance sheet holds a lot of debt and the company is fairly leveraged: 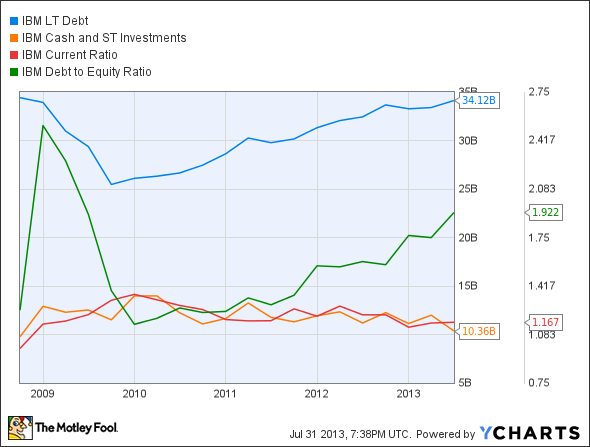 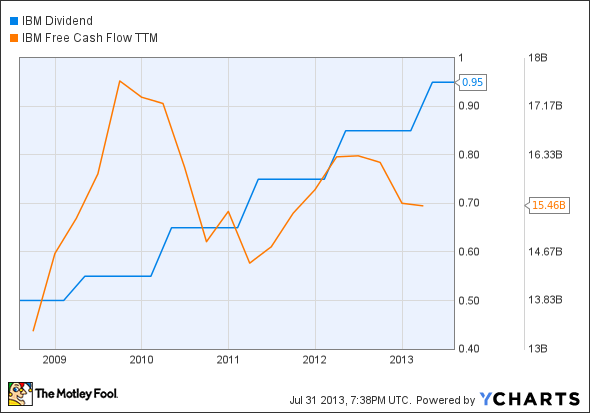 International Business Machines Corp. (NYSE:IBM) has paid out a dividend every year since 1916, and also has an impeccable record of raising its dividend every year. Shares currently yield only about 1.90%, but with an extremely low payout ratio of 25%, International Business Machines Corp. (NYSE:IBM)’s dividend is one of the safest on the market.

Even though it’s a favorite of Warren Buffet, and coming off of a good quarter, shares still aren’t that expensive. IBM’s future prospects look bright, with the company recently raising its full-year outlook. 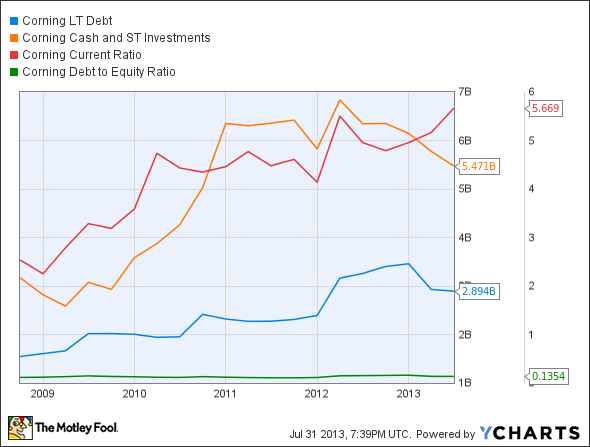 Corning Incorporated (NYSE:GLW) also seems to have gotten the hint that investors love dividends, as it has begun to increase its payout: 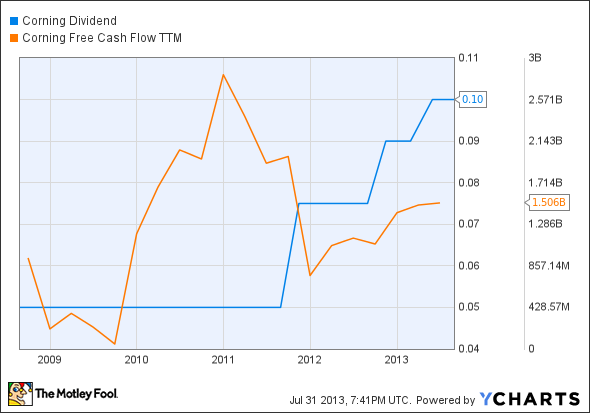 A trend of consistent dividend increases may eventually attract a bigger crowd. Shares currently yield around 2.60%.

So what about the future? Corning Incorporated (NYSE:GLW)’s CEO elaborated that its signature Gorilla Glass product can eventually evolve into a $2 billion market. Keep in mind that this product wasn’t even existent 5 years ago, and it now accounts for 17% of the company’s revenues, according to Bloomberg. Gorilla Glass is now found in over 1.5 billion devices.

Gorilla Glass will also provide great growth if the company successfully integrates it into things such as car windshields, which it plans to, according to Corning Vice President Jeff Evans. Bigger pieces of glass mean more profits for Corning.

IBM may be a better bet for those seeking capital appreciation. The company’s recent quarter, while not stellar, was a huge improvement from the quarter preceding it.

With such a strong balance sheet and coming off a relatively strong quarter, Corning is a great value play with good growth prospects.

These three companies make a nice little basket of dividend-paying tech stocks. Just make sure to keep your eyes on their performance as you’re collecting your dividends.

The article 3 Unloved Tech Stocks to Buy Now originally appeared on Fool.com and is written by Joseph Harry.