Study after study shows that most investors underperform the major indexes, failing to even match them; a lot just plain and simple lose money. The sad thing? You do it to yourself most of the time.

There are dozens of systems and methods that both purported and legitimate experts tout — from penny-stock scams to legitimate, if overly complex and needlessly time-consuming valuation systems — that still lead to market underperformance. Yet one of the simplest methods that most investors should probably use, but very few ever do, gets ignored: dollar cost averaging.

Dollar cost averaging is simply making scheduled regular investments into a specific equity on a mechanical basis. For a young investor, maybe it’s $100 per month into shares of a company, times three or four companies or Index funds.

The Fool’s Morgan Housel gives some insight in this article:

Simply put, dollar cost averaging gets you – the investor – out of the way when it comes to making a decision. You are more likely to get the advantage of the drop with those mechanical buys, and not miss the run back up because you didn’t either panic or think you could outsmart the market and sell out on the drop, just to miss the run back up.

Will these high-flyers keep flying?

The companies below share a common thread: All three were near the top-performers during the period from 1990-2000, increasing on average by an incredible. 9,262% over the decade: 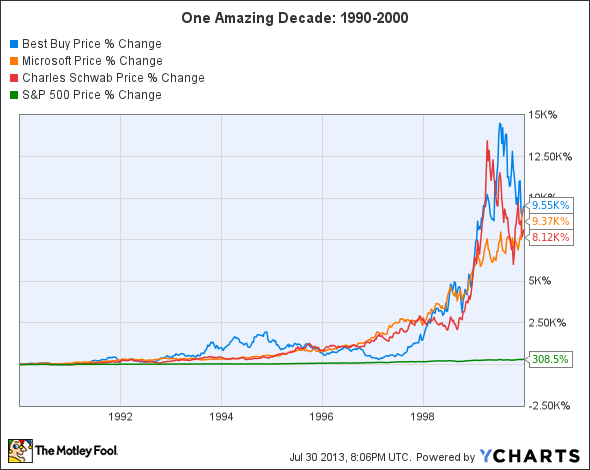 If you were looking for solid, long term investments, these companies had a past record of amazing success, but just as important, a future that still offered growth back in 2000.

Best Buy Co., Inc. (NYSE:BBY) was no longer just a regional electronics retailer, having expanded to become the second largest in the nation, quickly taking market share from the now-defunct Circuit City by 2000.

But the Great Recession and the recent growth of web retail have exposed cracks in the foundation of 1,300 bricks and mortar stores. Today, the company is attempting to convert to a leaner operation, shifting its focus in the face of changing consumer demand.

As one of the first movers into the online brokerage business, Charles Schwab Corp (NYSE:SCHW) was still offering up plenty of growth potential in 2000 as more and more people moved to online investing.

However, missteps led Charles Schwab Corp (NYSE:SCHW) to return as CEO after only one year away in 2004. His efforts to refocus a company that, as he said, had “lost touch with our heritage” paid dividends, returning the company to increased profit and revenue growth. Despite another leadership change in 2008, CEO Walter Bettinger, and Schwab as Executive Chairman, have done an admirable job in leading the company through the recession and ongoing recovery.