Microsoft Corporation (MSFT), America Movil SAB de CV (ADR) (AMX): Why Bill Gates and Carlos Slim Are Getting Richer, and Why You Should Care

For years, Bill Gates was the richest man in the world, buoyed by his stake in Microsoft Corporation (NASDAQ:MSFT). In 2010, though, he was overtaken by Carlos Slim, a Mexican investor whose holdings in America Movil SAB de CV (ADR) (NYSE:AMX) account for $49 billion of his $73 billion fortune. However, Bloomberg just reported that Bill Gates is once again the wealthiest man on the planet thanks to a surge in Microsoft’s stock.

This raises an interesting question—who is most likely to maintain the top spot, based on their key holdings? To evaluate this question, I will analyze the outlooks of Microsoft Corporation (NASDAQ:MSFT) and America Movil based on several indicators, including P/E ratio and free cash flow, in conjunction with industry news and upcoming reports.

By now, it’s obvious that Bill Gates’ sudden increase in wealth does not stem from the release of Windows 8. The goal of the new platform was to help Microsoft compete with Apple Inc. (NASDAQ:AAPL) in the tablet market. It failed miserably in this regard, and even alienated PC buyers.

According to numbers from the IDC, there was a double-digit decrease in PC shipments in the first quarter. Despite the fact that Windows 8 was a complete dud, Microsoft Corporation (NASDAQ:MSFT) somehow managed to show a surge. Clearly, we need to look elsewhere for the source.

The next place to turn is to the Xbox One, which was revealed on May 21. It comes with an 8-core CPU, Wi-Fi support, and a Blu-Ray drive. The kicker is the new HDMI — this will allow it to interface with set-top boxes and integrate Kinect with the whole television-watching experience.

This innovation sets it apart from other new releases such as Sony Corporation (ADR) (NYSE:SNE)’s PlayStation 4. From a company that has sat on its last gaming console (the Xbox 360) for nearly eight years, this is sure to create a stir. So far this year, Microsoft has outperformed the Nasdaq Composite by roughly 14%, and it should continue this run throughout the next few years on the back of the Xbox One.

The technological developments of the Xbox One exemplify why I see Microsoft continuing its domination of the gaming industry. It leads all of the other producers in terms of technological innovation, and there’s no reason that this should change. For example, the company recently revealed its Illumiroom system (not included in the Xbox One), which extends game play beyond the television screen. Given this situation, Microsoft Corporation (NASDAQ:MSFT) is well poised to demonstrate strong growth in the mid- and long-term periods. 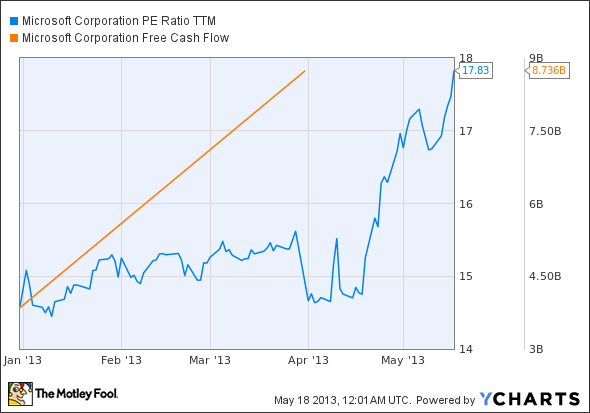 Year-to-date, Microsoft Corporation (NASDAQ:MSFT) has shown significant increases in both PE ratios and free cash flow. The rising PE ratio indicates that market optimism is increasing with regards to Microsoft’s prospects, and is an indicator of good things to come, especially with the release of the new Xbox, which has the potential to drastically increase earnings. The high free cash flow (to the tune of over $8 billion) also indicates that Microsoft Corporation (NASDAQ:MSFT) has strong potential to grow and pay security holders. In the opinion of this analyst, Microsoft should be able to grow robustly, and Bill Gates’ fortune will continue to grow as well.

However, automatic forced asset sales aren’t a part of the deal as was once feared. That, coupled with aggressive expansion into other Latin American markets such as Brazil and Columbia, should allow America Movil SAB de CV (ADR) (NYSE:AMX) to stay profitable.

New entrants in the Mexican market will erode profit margins, so the company most likely won’t show the same growth that it did earlier this decade. That’s not to say that there won’t be growth; it will just be more modest.

Aside from the legislative obstacles that America Movil faces, its outlook is very promising. It has aggressively expanded into new markets both within Latin America and outside of the region. The company even owns a 23% stake in Telekom, an Austrian telecommunications company. This is reflective of America Movil SAB de CV (ADR) (NYSE:AMX)’s geographic diversification strategy, which has seen it attempt to purchase controlling interests in several European corporations. Investors should expect this strategy to start paying off, or at least offset much of the negative effect from the Mexican legislation.

Bill Gates is in a far better position than Carlos Slim to increase his fortune. Microsoft Corporation (NASDAQ:MSFT) is poised to dominate the console-gaming market for years to come, and recent investments made on the company’s part reinforce this idea.

Not only that, but its P/E ratio indicates that high earnings are to be expected in the future. This is a good sign for any investor, especially when Microsoft Corporation (NASDAQ:MSFT)’s free cash flow gives it a lot of flexibility in terms of spending and investments. It’s time to buy Microsoft. This is a stock that you can retire on—even when a new product release failed (Windows 8) it still managed to post remarkable gains by riding on the back of another (the new Xbox). I see this stock soaring, and it’s time to hop on the bandwagon before it’s too late.

That being said, Carlos Slim will most likely see increases in his wealth as well. America Movil is well positioned to diversify its operations, which should mitigate some of the deleterious effects of regulation in Mexico. As the company increases its market share in Latin America and North America, we should see earnings rise accordingly. If Slim succeeds in purchasing large shares of European corporations, that’s a bonus.

For now, America Movil SAB de CV (ADR) (NYSE:AMX) is a stock to hold. Stockholders should be wary when the Mexican regulation actually takes place in 2014. America Movil will be hurt then, but not critically. Regardless, Carlos Slim will walk away a winner, though not quite as much a winner as Bill Gates.

The article Why Bill Gates and Carlos Slim Are Getting Richer, and Why You Should Care originally appeared on Fool.com and is written by Hunter Hillman.

Hunter Hillman has no position in any stocks mentioned. The Motley Fool owns shares of Microsoft. Hunter is a member of The Motley Fool Blog Network — entries represent the personal opinion of the blogger and are not formally edited.