Metlife Inc (NYSE:MET): Are Hedge Funds Right About This Stock?

The Insider Monkey team has completed processing the quarterly 13F filings for the September quarter submitted by the hedge funds and other money managers included in our extensive database. Most hedge fund investors endured a torrid quarter, which certainly propelled them to adjust their equity holdings so as to maintain the desired risk profile. As a result, the relevancy of these public filings and their content is indisputable, as they may reveal numerous high-potential stocks. The following article will discuss the smart money sentiment towards Metlife Inc (NYSE:MET).

Metlife Inc (NYSE:MET) has seen a decrease in hedge fund sentiment lately. MET was in 24 hedge funds’ portfolios at the end of the third quarter of 2018. There were 26 hedge funds in our database with MET positions at the end of the previous quarter. A decline in interest was hardly what the company needed to secure a place on the list of 30 most popular stocks among ALL hedge funds.

To most investors, hedge funds are assumed to be worthless, old investment vehicles of years past. While there are greater than 8000 funds with their doors open at the moment, Our researchers look at the crème de la crème of this club, about 700 funds. These investment experts manage the lion’s share of all hedge funds’ total asset base, and by tracking their top picks, Insider Monkey has discovered a few investment strategies that have historically outrun the S&P 500 index. Insider Monkey’s flagship hedge fund strategy outpaced the S&P 500 index by 6 percentage points a year since its inception in May 2014 through early November 2018. We were able to generate large returns even by identifying short candidates. Our portfolio of short stocks lost 26.1% since February 2017 even though the market was up nearly 19% during the same period. We just shared a list of 11 short targets in our latest quarterly update.

MetLife, Inc. reported third-quarter 2018 operating earnings of $1.38 per share as bottom line surged 33% year over year. The company produced operating revenues of $16.4 billion, down 2% over the year-ago period. Adjusted earnings in the U.S. segment soared 47% year over year to $795 million, driven by the Trump tax cuts, a favorable underwriting alongside volume growth.

What does the smart money think about Metlife Inc (NYSE:MET)? 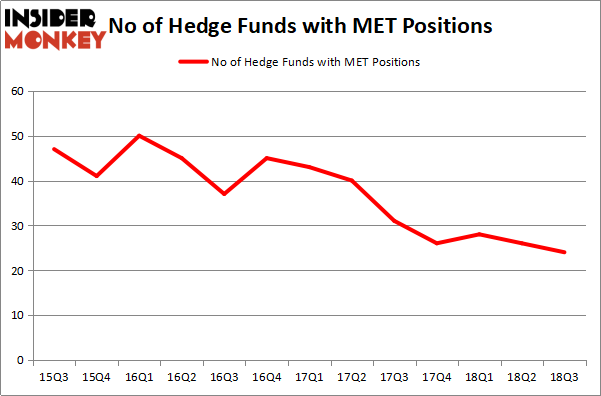 Judging by the fact that Metlife Inc (NYSE:MET) has experienced bearish sentiment from the entirety of the hedge funds we track, it’s easy to see that there lies a certain “tier” of fund managers who were dropping their entire stakes heading into Q3. Intriguingly, Malcolm Fairbairn’s Ascend Capital said goodbye to the biggest investment of the 700 funds followed by Insider Monkey, totaling an estimated $14.7 million in stock. Ron Bobman’s fund, Capital Returns Management, also said goodbye to its stock, about $6.4 million worth. These moves are intriguing to say the least, as total hedge fund interest fell by 2 funds heading into Q3.

As you can see these stocks had an average of 30.75 hedge funds with bullish positions and the average amount invested in these stocks was $1381 million. That figure was $1158 million in MET’s case. Target Corporation (NYSE:TGT) is the most popular stock in this table. On the other hand Carnival plc (NYSE:CUK) is the least popular one with only 8 bullish hedge fund positions. Metlife Inc (NYSE:MET) is not the least popular stock in this group but hedge fund interest is still below average. This is a slightly negative signal and we’d rather spend our time researching stocks that hedge funds are piling on. In this regard TGT might be a better candidate to consider a long position.