I’m back again on a search for the best casino stock in the gaming industry. A lot has changed in the industry over the past year with explosive growth on Cotai in Macau, continued deterioration of regional gaming in the U.S., and a new construction boom that will drive the next generation of growth in the industry.

Over the past year, gaming stocks have had an incredible run, as you can see below. My top pick from a year ago, which is Melco Crown Entertainment Ltd (ADR) (NASDAQ:MPEL), performed the best over the past year, driven by growth on Cotai. 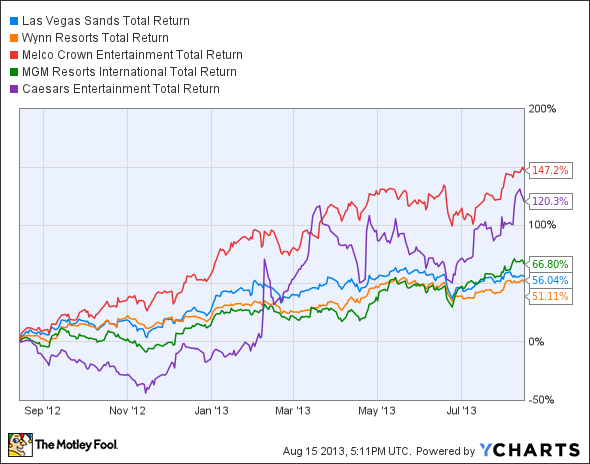 Melco Crown Entertainment Ltd (ADR) (NASDAQ:MPEL) has definitely been a great performer financially, but a lot of the gains seen on the market are because of valuation multiple expansion. I’ll explain later why that will keep this from being my top stock this time around.

I’ll be using an enterprise value/EBITDA multiple to put a value on these stocks. The enterprise value allows me to pull debt into the equation, and EBITDA is a great approximation of the cash flow casinos spit off from operations. Below, I’ve built a table with the net debt, market cap, and trailing 12-month EBITDA for each company.

Based strictly on the data above it looks like MGM Resorts is the least expensive and Melco Crown Entertainment Ltd (ADR) (NASDAQ:MPEL) is most expensive. But we have to consider location, growth rates, and future expansion to paint the true picture of the industry.

The U.S., Macau, and Singapore

Melco Crown Entertainment Ltd (ADR) (NASDAQ:MPEL), Las Vegas Sands Corp. (NYSE:LVS), and Wynn Resorts, Limited (NASDAQ:WYNN) all get a majority of their revenue from Macau, an area that’s still growing double digits per year. On the flip side, Caesars Entertainment Corp (NASDAQ:CZR) gets most of its revenue from regional gaming in the U.S., and the balance in Las Vegas. Regional gaming has struggled with increased competition, and nearly everyone is seeing falling revenue and profits.

Everyone on this list except for Melco Crown has some exposure to Las Vegas, where conditions have slowly and steadily improved since the recession hit bottom. That’s where MGM Resorts International (NYSE:MGM) gets most of its revenue, with a 51% stake in its Macau subsidiary sprinkled in.

With these positions in mind, Macau exposure should be worth the most with Las Vegas second, and little value placed on U.S. regional gaming, where companies are losing money. That’s the framework of the lense I view companies through. Now let’s look at expansion.

Every one of these companies has a resort coming on Cotai, except for Caesars Entertainment Corp (NASDAQ:CZR). Add to that a stake Melco Crown has in a Philippines resort, and there’s a fair amount of expansion coming to the industry. Most of the expansion on Macau won’t take place until 2016, but it’s still worth looking at when considering upside.

Let’s assume that each new Cotai resort generates $1 billion in EBITDA (probably low given existing resorts), and then adjust the valuation multiples. I’ve accounted for MGM’s 51% stake in its Macau subsidiary, and projected a total of $1 billion in new EBITDA for Melco Crown from its 60% ownership in Studio City and minority stake in The Philippines. I haven’t adjusted for the majority stake Las Vegas Sands Corp. (NYSE:LVS) and Wynn Resorts, Limited (NASDAQ:WYNN) have in Macau because I didn’t above.

You can see that a single casino added to Melco Crown and Wynn Resorts, Limited (NASDAQ:WYNN) makes a huge impact on valuation because they only have two major casinos, so adding one more changes their respective values a lot. Adding one more to Las Vegas Sands Corp. (NYSE:LVS) doesn’t have the same impact.