We at Insider Monkey have gone over 752 13F filings that hedge funds and prominent investors are required to file by the SEC The 13F filings show the funds’ and investors’ portfolio positions as of September 30th. In this article, we look at what those funds think of Materialise NV (NASDAQ:MTLS) based on that data.

Hedge fund interest in Materialise NV (NASDAQ:MTLS) shares was flat at the end of last quarter. This is usually a negative indicator. At the end of this article we will also compare MTLS to other stocks including Re/Max Holdings Inc (NYSE:RMAX), Livent Corporation (NYSE:LTHM), and National Western Life Group, Inc. (NASDAQ:NWLI) to get a better sense of its popularity.

To most traders, hedge funds are viewed as worthless, outdated financial tools of yesteryear. While there are over 8000 funds trading at the moment, Our experts hone in on the masters of this club, about 750 funds. These investment experts administer the majority of the smart money’s total asset base, and by tailing their first-class investments, Insider Monkey has found many investment strategies that have historically outrun the market. Insider Monkey’s flagship short hedge fund strategy exceeded the S&P 500 short ETFs by around 20 percentage points annually since its inception in May 2014. Our portfolio of short stocks lost 27.8% since February 2017 (through November 21st) even though the market was up more than 39% during the same period. We just shared a list of 7 short targets in our latest quarterly update . 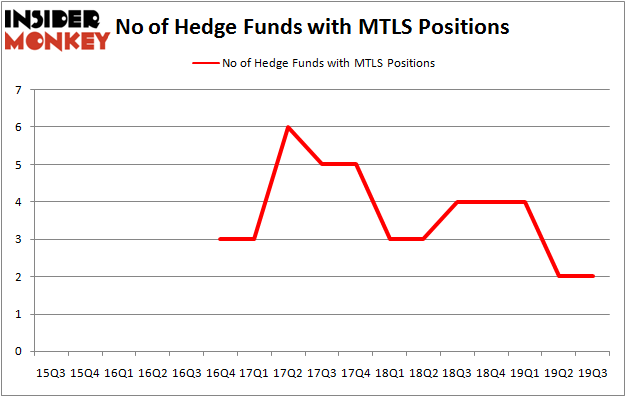 The largest stake in Materialise NV (NASDAQ:MTLS) was held by Royce & Associates, which reported holding $5 million worth of stock at the end of September. It was followed by Renaissance Technologies with a $4.4 million position.

As you can see these stocks had an average of 13.5 hedge funds with bullish positions and the average amount invested in these stocks was $145 million. That figure was $9 million in MTLS’s case. Livent Corporation (NYSE:LTHM) is the most popular stock in this table. On the other hand Re/Max Holdings Inc (NYSE:RMAX) is the least popular one with only 9 bullish hedge fund positions. Compared to these stocks Materialise NV (NASDAQ:MTLS) is even less popular than RMAX. Hedge funds dodged a bullet by taking a bearish stance towards MTLS. Our calculations showed that the top 20 most popular hedge fund stocks returned 34.7% in 2019 through November 22nd and outperformed the S&P 500 ETF (SPY) by 8.5 percentage points. Unfortunately MTLS wasn’t nearly as popular as these 20 stocks (hedge fund sentiment was very bearish); MTLS investors were disappointed as the stock returned -5.8% during the fourth quarter (through 11/22) and underperformed the market. If you are interested in investing in large cap stocks with huge upside potential, you should check out the top 20 most popular stocks among hedge funds as 70 percent of these stocks already outperformed the market so far in Q4.

Here is The 14th Most Popular Stock Among 752 Hedge Funds
Monthly Newsletter Strategy
Download a free copy of our newsletter and see the details inside!
Hedge Fund Resource Center
Related News
10 Easiest Instruments For Adults To Learn On Their Own 10 Most Profitable Franchises In The World 10 Most Famous Sports Arenas In The World
Billionaire Hedge Funds