It appears the sparkle of the online jeweler Blue Nile, Inc. (NASDAQ:NILE) is beginning to dull in the eyes of Marathon Asset Management. Per a recent SEC filing, Marathon cut its position in the online retailer to just over 615,000 shares, or 4.92% of Blue Nile’s outstanding shares.

This is a big change from the 1.69 million shares that Marathon owned at the end of the third quarter. It appears that Blue Nile’s over-valuation might well be at the heart of Marathons’ sell thesis. The stock is trading near 60 times trailing earnings, which is above historical levels; what’s more is that the earnings growth doesn’t appear to support a premium multiple (check out all the stocks Marathon owns here).

Competition for the industry is flush, where Zales and Sterling actually lead the retail segment with respect to store number. Surprisingly enough, or maybe not so surprising, is that Wal-Mart leads the retail jewelry segment in sales, generating some $2.75 billion from jewelry sales. The other major competitors all came in with an estimated $1.4 billion, this includes Sterling, Zales, Macys and Tiffany & Co. (NYSE:TIF)’s.

Blue Nile’s CEO believes there is little to worry about concerning competition, stating that…

The 150,000 diamonds that we have on our site, the 20 to 40 percent price differential between traditional brick and mortar stores and what we bring to market helps to re-ignite our business success and really grow.

I tend to respectively disagree. The number of stores already in the market might not scare Blue Nile, but what they are doing should. These retailers have been offering lower-cost products, even at the expense of its margins, which could well continue to take market share from Blue Nile. The need to compete has put steady pressure on both Amazon and Blue Nile, as exhibited by a decline in profit margins: 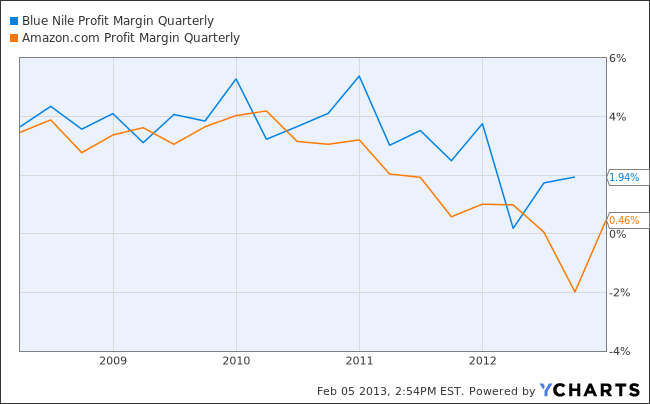 The benefits of ecommerce and shopping at home has put strains on the likes of major brick-n-mortar retailers. The convenience and savings of shopping online is undeniable, where Forrester Research projects that U.S. e-commerce sales will increase from $202 billion in 2011 to $327 billion in 2016, an annual growth rate of 10.1%. Many investors may also find reason for concern related to Amazon’s forward price to earnings multiple of 160 times, but the e-commerce company has a much broader product offering than Blue Nile, one that includes almost any imaginable item. As well, Amazon has other initiatives, including Amazon Prime and its Kindle Fire that are playing key roles in inspiring larger and more frequent purchases.