“When I go long, the price of the instrument starts moving in the other direction.” I’m sure, at some point in time, every investor has complained about this. Well I hate to preach, so I’ll merely cite Buffett’s popular saying, “Be fearful when others are greedy and greedy when others are fearful.”

So how do we get to know that we won’t end up catching falling knives?

As most people say, there’s no holy grail for perfect timing. But as investors, we can follow insider transactions, as they highlight the faith and confidence of the key personnel in the company. 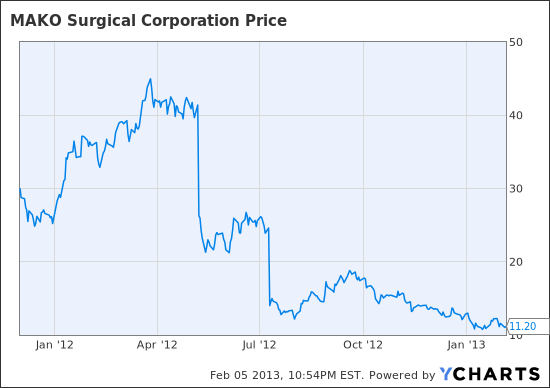 The above chart displays the stock price of MAKO Surgical Corp. (NASDAQ:MAKO) over the last 2 years, and the chart attached below displays the insider transactions, over the same period.

(A detailed report on insider transactions can be found here)

It’s not hard to conclude that when the share price of Mako Surgical was rising, insiders of the company were selling their personal stock holdings. But one should carefully note that the insiders are now buying the shares of their company. This indicates that these highly placed insiders (which includes its 5 directors), now believe that the shares of Mako Surgical are oversold, and that there could be an upside.

Why the stock shouldn’t slide

Recently the management at Mako announced that its annual sales targets have been met. The company sold 15 Robotic Arm Interactive Orthopaedic (RIO) units in Q4 and 45 units in 2012. But the street was disappointed due to the lack of sales growth on a YoY basis. However MAKOplasty procedures have risen by 47% in 2012 YoY, whereas its sales have remained flat. This indicates increasing operations per RIO unit, and to keep up with the solid annual growth rate, the demand for its RIO systems will most likely increase. Piper Jaffray has as an outperform rating on Mako Surgical.

Total robotic procedures in the US have risen by 27.7% in 2012 YoY and in 2013, the growth is expected to be around 20%-23%. Moreover the Indian and Chinese healthcare markets are largely untapped. Both the countries are the world’s most populated countries, with the world’s fastest growing GDPs, where robotic surgeries are still not mainstream. Additionally, China plans to build 5,000 new hospitals which altogether present a bullish case for the entire robotic surgery industry, and companies like Intuitive Surgical, Inc. (NASDAQ:ISRG) and Stryker Corporation (NYSE:SYK) are also expected to benefit.

Stryker Corporation derives 6% of its revenues from emerging nations including India, China and Brazil. No doubt the revenue share from these nations is small, but its presence in the region allows the company to take advantage of the immense growth potential presented by the Miracle Nations, without worrying much about the saturating US healthcare industry over the longer run. Moreover, the company recently offered to buy Chinese Spine Products maker, Trauson Holdings for $764 million which would allow Stryker to rapidly expand in China, without regulatory hassles and bureaucratic loops.