Insider Monkey has processed numerous 13F filings of hedge funds and famous investors to create an extensive database of hedge fund holdings. The 13F filings show the hedge funds and investors’ positions as of the end of the third quarter. You can find write-ups about an individual hedge fund’s trades on numerous financial news websites. However, in this article we will take a look at their collective moves and analyze what the smart money thinks of MacroGenics Inc (NASDAQ:MGNX) based on that data.

MacroGenics Inc (NASDAQ:MGNX) investors should pay attention to an increase in hedge fund interest in recent months. MGNX was in 19 hedge funds’ portfolios at the end of September. There were 18 hedge funds in our database with MGNX holdings at the end of the previous quarter. Our calculations also showed that mgnx isn’t among the 30 most popular stocks among hedge funds.

What have hedge funds been doing with MacroGenics Inc (NASDAQ:MGNX)? 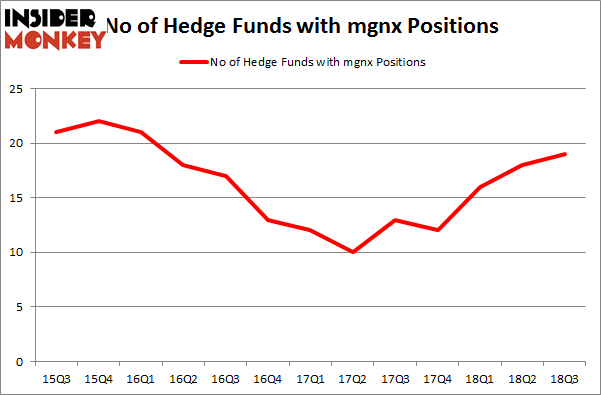 More specifically, EcoR1 Capital was the largest shareholder of MacroGenics Inc (NASDAQ:MGNX), with a stake worth $31.8 million reported as of the end of September. Trailing EcoR1 Capital was Point72 Asset Management, which amassed a stake valued at $24.3 million. Prosight Capital, 683 Capital Partners, and Rock Springs Capital Management were also very fond of the stock, giving the stock large weights in their portfolios.

As you can see these stocks had an average of 13.25 hedge funds with bullish positions and the average amount invested in these stocks was $103 million. That figure was $95 million in MGNX’s case. Nanometrics Incorporated (NASDAQ:NANO) is the most popular stock in this table. On the other hand National Presto Industries Inc. (NYSE:NPK) is the least popular one with only 10 bullish hedge fund positions. Compared to these stocks MacroGenics Inc (NASDAQ:MGNX) is more popular among hedge funds. Considering that hedge funds are fond of this stock in relation to its market cap peers, it may be a good idea to analyze it in detail and potentially include it in your portfolio.