Over the last few years yoga pants have taken the country by storm as the apparel made its way into all aspects of life. At first primarily an athletic staple, yoga pants have become an everyday fashion option for many women. Lululemon Athletica inc. (NASDAQ:LULU), a major yoga-related retailer, reported its first quarter earnings earlier this week, and the company was able beat analyst expectations while announcing a 7% increase in same store sales.

However, shares slumped almost 18% as the company surprisingly announced that Chief Executive Officer Christine Day was stepping down from her position. Up to this point, Day has been very influential in Lululemon Athletica inc. (NASDAQ:LULU)’s success. As a result, a slew of investment analyst dropped estimates–an analyst from Sterne Agee downgraded  the company to a “neutral” from a “buy” and cut its price target to $75 from $90, citing in part “a lack of information regarding the future leadership of Lulu (that) is of great concern.” 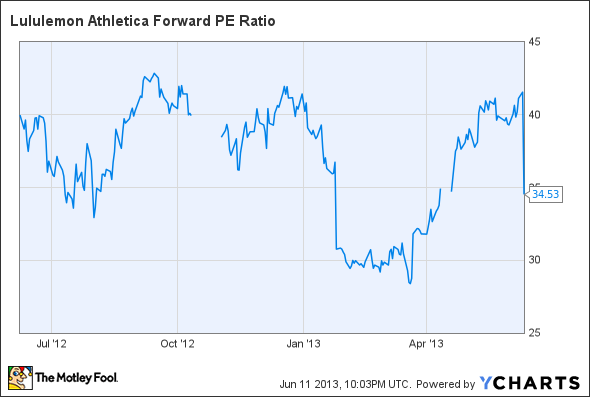 Lululemon Athletica inc. (NASDAQ:LULU), a high growth company, trades at forward multiples that are vulnerable should any fears set in. Going into earnings, the company was trading at a forward valuation over 40 times earnings–after Tuesday’s drop the company is now trading at a more conservative valuation of 34.5 times forward earnings.  I believe that if innovation at Lululemon slows, a number of competitors stand ready to take the company’s market share, in turn further slowing growth and lowering forward valuations. I would like to highlight a couple of cheaper alternatives to Lululemon that are already starting to gain market share. 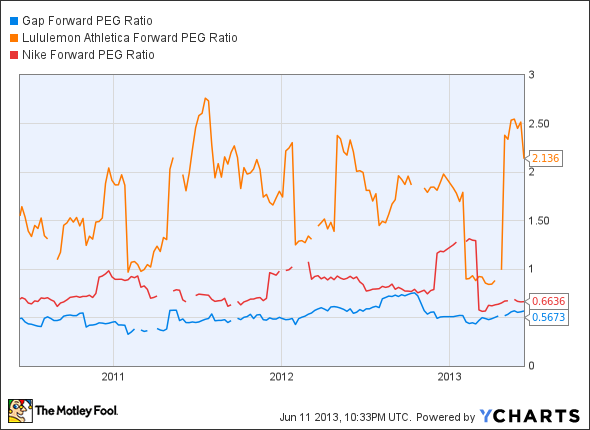 Lets first compare Lululemon Athletica inc. (NASDAQ:LULU) to a couple of competitors on a forward PEG basis. Investors can use the PEG ratio to determine if a stock may be overvalued or undervalued compared to the rest of the industry or sector. Generally, the lower the PEG ratio, the lower the valuation. Currently, Lululemon is trading at a PEG ratio far above that of its competitors NIKE, Inc. (NYSE:NKE) and The Gap Inc. (NYSE:GPS).

Lets first take look at Nike, an athletic superpower with its hands in all aspects of performance apparel. Nike sells its selection of yoga pants for around $60, compared to Lululemon Athletica inc. (NASDAQ:LULU), which retails the majority of its pants for about $100. Nike may have lower pricing power now, but I remain confident in the company’s ability to catch up in the yoga apparel industry. In addition, I feel more comfortable investing in a company that has established itself across a greater selection of merchandise. Analysts are expecting NIKE, Inc. (NYSE:NKE) to grow earnings by 27% this quarter and over 13% for the next two years. I would expect the company to further integrate its portfolio of proprietary material into its yoga apparel in the years ahead.